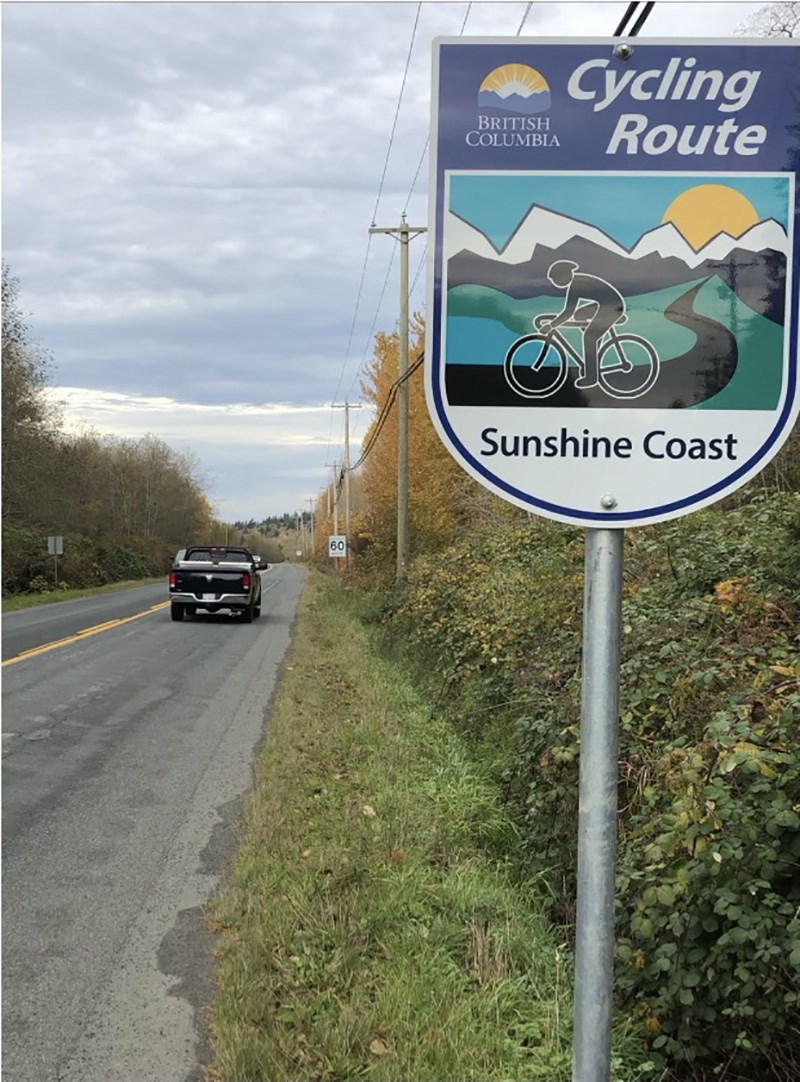 DIFFICULT ROAD: Highway 101 outside of Wildwood has a sign showing the highway as a cycling route but local resident and cycling enthusiast Liz Brach thinks the stretch of road is a danger to cyclists. Contributed photo

A Wildwood resident and cyclist is trying to enlist help to make cycling safer along Highway 101 north of Powell River.

Liz Brach has been reaching out to groups such as local ratepayers associations regarding improvements to the highway to accommodate a bike lane.

Brach said on the highway, just past Wildwood, there is a sign that reads: British Columbia Cycling Route – Sunshine Coast.

“This sign would imply that there is a designated bike route, or perhaps a bike lane that would allow one to ride to Lund at the end of the highway,” said Brach. “This would indeed be a very lovely and scenic ride.

“In actuality, the bike ride beyond the Wildwood neighbourhood is extremely dangerous. The ride north to Lund and beyond the junction of King Street and Highway 101 is one of the most unsafe sections of highway in the Powell River area, and likely in all of BC.”

Brach said it is characterized by many stretches of narrow pavement, with only a few sections painted with a white line on the right side of the highway. She said in many stretches of the highway, the pavement is cracking off at the edge. The edges, she said, are often uneven as a result, and with remaining parts sinking in a web of cracks.

Additionally, gravel shoulders in many parts of this “horrendous highway” are very narrow, according to Brach.

“Between the edge of the pavement and the almost non-existent shoulder, there is a gully that is two to six inches deep that one must ride over to get to the narrow shoulder should a vehicle approach from behind at a highway speed,” said Brach.

Brach said during the past three years, traffic north of Wildwood has increased steadily.

“On this narrow, winding highway there are large transport trucks, trucks towing boats and trailers, vehicles driving over the speed limit, and perhaps most concerning, fully loaded logging trucks hauling from the Lund area, and these same trucks are returning north,” said Brach. “This is not a bicycle route; this is a suicide route for bicyclists.”

Brach said improving the highway to accommodate a bike lane north of Wildwood would be an asset for Powell River residents and tourists to the area. She said Lund would be a perfect destination for a day ride, but at this time, it is a hazard.

“It’s criminal to call that a cycling route because if you rode that ride you really would put your life in danger,” said Brach. “I have actually done it once.”

Brach said she has written a letter asking ratepayers associations to sign, and Powell River Cycling Association is also a willing signatory, for cycling improvements on the highway.

“I’m feeling it’s a lot more powerful if it comes from organizations than from an individual,” said Brach.

The letter will be going out to the ministry of transportation and infrastructure, Powell River-Sunshine Coast MLA Nicholas Simons, qathet Regional District and City of Powell River.

Brach said she was in Ucluelet and Tofino a few weeks back and they have just completed an incredible cycle route that parallels the highway. She said it has a gravel bed and a nice hard top.

She said funding for the project came from the federal government and she’s wondering if similar funding could be found for a bike route in Powell River.

“It would be a real boon for tourism here,” said Brach.