With many skills Martinson chooses career from myriad of interests
Jan 17, 2011 9:00 PM By: Sandy Mccormick 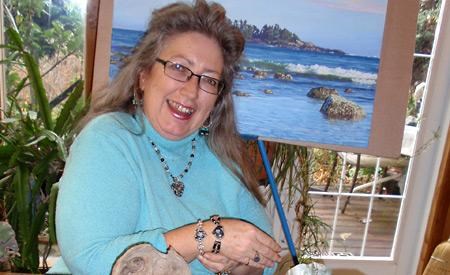 Texada Islander Amanda Martinson, 55, has made a career out of following her heart’s desire. She’s tried many careers, from landscape artist, silversmith and jeweller to hobby geologist, stone sculptor and author. She continues to do all this, and more.

Born and raised in Hamilton, Ontario, Martinson’s draftswoman mother taught her to draw as soon as she could hold a pencil. As a child, she liked drawing comics and collecting rocks and fossils found at the Hamilton Escarpment near her home. “That was my introduction to geology,” Martinson says. “My parents discouraged me from following a career in art because of a typical lack of job security.”

At University of Calgary, she trained for a career in engineering, switching to geophysics. She worked as a geophysical technician for oil and gas companies in Calgary, “which in reality meant sitting in front of a computer all day, which was not my cup of tea. I saw people put off to retirement things they really wanted to do, and die before they could do them. That wasn’t going to be me. Life is about being true to yourself and following your heart’s desire.”

In Calgary she met her partner of 28 years, Michael Poitras, and the two spent several years scuba diving in the Caribbean. There, she began painting seriously and while the surroundings were “stimulating and inspiring,” the couple didn’t like the political scene. They moved back to Canada, first to Toronto, where Martinson began making jewellery, then to Vancouver, Poitras’s hometown.

It was in Vancouver where Martinson officially launched her art career, painting surrealistic works in oils, and to her delight the paintings sold. They visited several Gulf Islands looking to buy a home and, from the shores of Lasqueti, they discovered Texada. “We loved the wildness of Texada,” Martinson recalls. In 1990, they bought a house near Van Anda with a large room upstairs for an artist’s studio, and moved in. Trekking around Texada, Martinson was overwhelmed with images for painting. She collected rocks, wood, shells and feathers. Calling herself a “nature girl at heart,” she learned about wildflowers and the unique species found only on Texada, such as wild orchids and chain ferns, which she used as subjects for botanical illustrations.

She painted landscapes in oils and garden florals in watercolors. “Because I love colour, form and pattern, painting the landscape is a satisfying challenge,” she says. “All the senses are fully engaged and thinking stops. Even though I make all kinds of creative art, landscapes are still my bread and butter.” Martinson’s work is featured at a number of BC galleries including the Holtenwood on Texada. Last spring, she was featured at Chemainus Theatre. “There are two types of art: the creative, which all artists do to express inspiration, and the popular, doing what people most want to buy. The artist hopes the ‘twain’ will meet.”

In researching Texada’s mineral richness, Martinson needed to go through six field guides to learn about local geology. In 2009, she compiled her own book, A Field Guide to the Rocks and Minerals of Texada Island, in which she writes about the metaphysical properties of local rocks. “The minerals affect your body, spirit and mind, particularly if you wear agates,” Martinson says. Traditional Texada flower rock, for example, promotes healing and she believes it should be classed as a semi-precious stone. The first edition of her book is sold out and she is working on a second.

After learning sculpting, lapidary and silversmithing skills, she collected even more rocks, which she cuts, polishes and incorporates into handmade jewellery. She also learned silversmithing to create one-of-a-kind pieces into which she often includes flower rock, red marble from Anderson Bay or rhodonite, a pink stone from Salt Spring Island.

Martinson also creates “suiseki,” the Japanese art of displaying stones, often on natural wood pedestals, that remind the viewer of something else. She says she had been doing it for several years before she knew what the art form was called.

“I like making beautiful things and am inspired by the spirit of the land,” Martinson says. She is on a personal quest “to find my unique voice and be the best artist I can be.”

She enjoys attending art shows and wishes there were more places on Texada and in Powell River to exhibit artistic creations. She hopes the waterfront redevelopment and/or the proposed new library will include such space. She believes there is a “magnificent wealth of visual local artistry which should be capitalized upon for everyone’s benefit.”

So where does an artistic/scientific-minded person like Martinson go from here? “Wherever the creative juices flow,” she says.

Do you know a Texada Islander you’d like to see featured? Email sandynleeti@gmail.com.