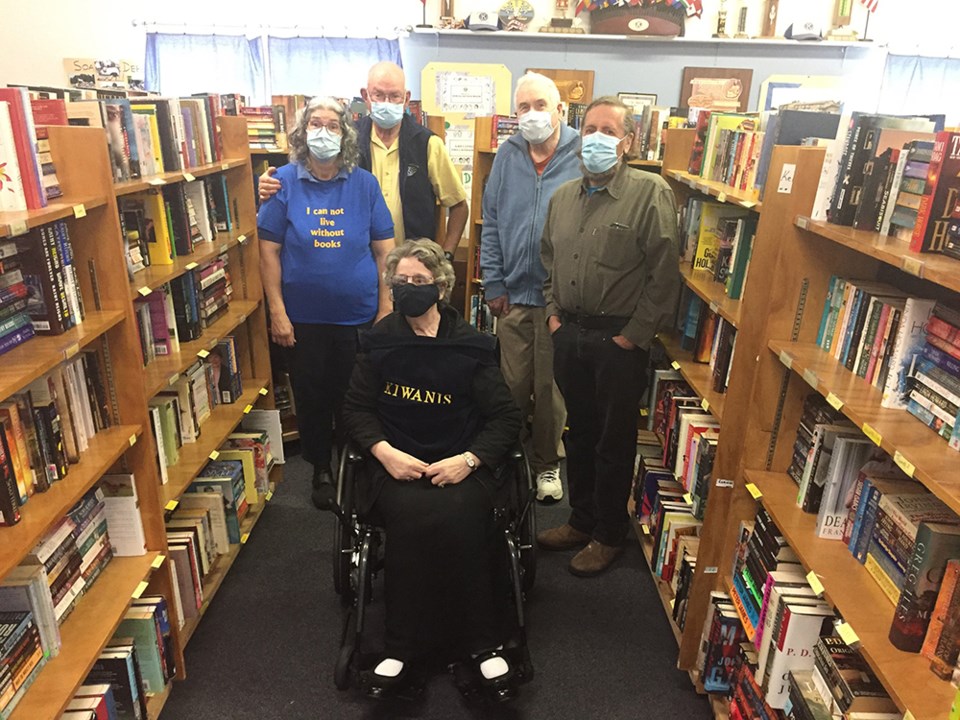 Fundraising to give back to the community is the main objective of Kiwanis Club of Powell River. Some of its traditional activities have been curtailed due to the COVID-19 pandemic.

However, the 18-member-strong organization has pivoted its popular book sales to meet current restrictions with buyers calling to make half-hour appointments to peruse the thousands of volumes at the clubhouse on Kiwanis Avenue.

Kiwanis International is a service club founded in 1915 and headquartered in Indianapolis, Indiana. It is found in more than 80 nations and geographic areas. Membership is more than 600,000. Each year, Kiwanis clubs raise more than US $100 million and report more than 18.5 million volunteer hours to strengthen communities and serve children.

Kiwanis Powell River’s club started in 1960 with Bert Long serving as its first president. Robert Maitland recently accepted his 13th straight term as president, on top of two previous ones.

Lifeline, which provides communication for vulnerable people living on their own, is a valuable service provided by Kiwanis and provides funds. A wishing well at Quality Foods is another source of donations.

Bus stop benches in bright Kiwanis blue can be found in 30 locations around the community. Currently the condition of the benches is being analyzed so members can undertake maintenance where needed.

Unfortunately, the very popular Soap Box Derby has been cancelled for the second year because of COVID restrictions.

The Kiwanis concession trailer would be set up at the derby, Loggers Sports and Blackberry Street Party.

“The idea came from Helene Williamson and her sister at Sunshine Disposal,” says Kathy Maitland, a mainstay of the book sales. “They were seeing thousands of books coming in every few weeks.”

There used to be book sales with up to 20 people lined up when they opened. Now all sales are handled by half-hour appointments three days a week. Even with a low charge for books, the club has been able to raise a considerable amount of money for community donations, including high school bursaries.

Prior to obtaining eight shelving units from Breakwater Books when it closed, all books were kept in boxes that customers would browse through.

“Now it is a library,” says Kathy. “Books are classified by authors, some of whom write under several different names.”

Boxes are now only used for miscellaneous authors with only one book.

“We are fussy about what we accept,” says Kathy, “and want books that are in good condition.”

The books are marked with a coloured pen as they first go into circulation. One book, A Discovery of Strangers by Rudy Wiebe, has been purchased and returned five times.

In addition to the books at the clubhouse, Kiwanis members replenish 22 book cupboards in the community.

“A man was moving to a place where he could not keep his large selection of CDs,” says Robert, “so he donated them all to us.”

All donations are set aside untouched for 72 hours before they are catalogued.

Monies raised from book sales in April, May and June will be donated to local Girl Guides, who have not been able to sell their cookies.