Efforts being made for film society to secure ownership of Patricia Theatre
Apr 9, 2021 4:35 PM By: Paul Galinski 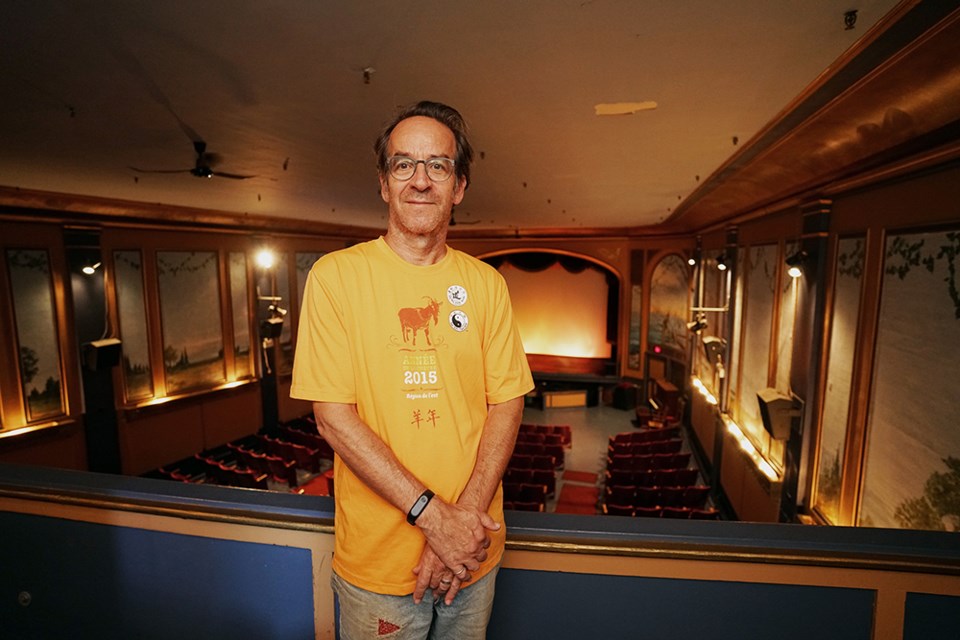 WANTS FACILITY: Powell River Film Society executive director Gary Shilling has indicated the society has been busy in its efforts to secure ownership of the Patricia Theatre from the Patricia Entertainment Company. Peak archive photo

A press is on to transfer ownership of the Patricia Theatre.

Gary Shilling, executive director of Powell River Film Society (PRFS), said the term of Patricia Entertainment Company managing partner Ann Nelson’s mortgage with First Credit Union (FCU) is up at the end of April. He said the film society board has had meetings with FCU and Nelson regarding the matter.

“Just so people know, the credit union is not bringing the axe down at the end of the month,” said Shilling. “They have agreed to go on a month-by-month basis after that deadline.

“Our purchase agreement ends around May 4, just after the credit union deadline. The Patricia Entertainment Company and the film society will sign an agreement to extend it and we’ll get that time to figure things out.”

Shilling said in the meeting with the credit union’s commercial lender, an assurance has been given that they are understanding of the situation.

He said at the same time, the film society has put forward a business plan to the credit union and Powell River Community Forest, which indicates what the society’s plans are for the theatre.

“We’ve covered the basic bases and we’ve had feedback,” said Shilling. “The community forest has advised they have received our application. We can expect through due process to hear sometime in May.”

Shilling said the film society has never expected that through small, individual donations alone, they would make up the necessary $450,000 for the sale.

“I didn’t want the community to feel that pressure because, in fact, the community has stepped up time and time again for the Patricia,” said Shilling.

An example was in August 2019, when the film society initiated a fundraising drive to patch the roof, with a goal to raise $15,000.

“Individuals donated, the Sunrise Rotary Club contributed, as did local businesses; people seemed to respond in a critical situation,” said Shilling. “The roof was leaking at the time and by the time the film festival came around in early 2020, the scaffolding was up and the roof was patched.”

Shilling said there are three categories of donors to purchase the theatre. First, there are community funders, such as the community forest, Powell River Community Foundation and FCU. He added there are the people with deep pockets, and his hope is some in this category will come forward and take advantage of the naming opportunities in the theatre, for them to become part of the legacy. He said some people were particularly attached to the loge boxes at the back of the theatre and those were $15,000 donations each. There have also been a number of $5,000 donations. In the past week, there has been approximately $10,000 in donations made, according to Shilling, which is “really awesome.”

He said he gets questions about what happens if the fundraising fails. Plan A is receiving funding from the community forest, and if that doesn’t happen, the film society has been approached by a private individual who is willing to go into a partnership and let the society run the theatre and supply the necessary funds and collateral to secure it.

In addition to the purchase of the theatre, a great deal of maintenance needs to be done. A building science company had done a mechanical assessment of the building, so the society has a clear idea of what’s ahead to bring it up to standard and secure it for the long term, according to Shilling.

Shilling said Heritage BC has kicked in $103,000, which is going toward exterior restoration. He is hoping with money and support, the film society can leverage that and see if further support can be found.

“We encouraged people to do one of two things,” said Shilling. “If people have the means, be part of the legacy and take advantage of some of the naming opportunities, and if you just want to show your support, no donation is too small. Just let the world know you think the Patricia Theatre is an important historical element in Townsite and Powell River and you’d hate to see it gone.”

Shilling said once society ownership has been secured, there are federal and provincial funds that support maintaining important heritage buildings.

“We’re committed to it being there for generations to come and we think the best way to ensure that is to have community ownership,” said Shilling. “We’re confident the plan we put forward to First Credit Union is a feasible one. I want people to know I’m optimistic we can make it happen. I encourage people to step forward and help however they can.”

Shilling estimated that if one adds up the purchase of the digital projection system, all of the volunteer hours contributed, plus all of the work that has been done, the community has invested the equivalent of about $250,000 in the theatre since 2007. If the community hadn’t donated toward the digital projection system, the theatre would have closed in 2012, he added.

Shilling said people can find more information at prfilmfestival.ca. At the bottom of the page there is a link to canadahelps.org, where donations can be made.

Shilling said he also encourages people to contact him directly at gary@prfilmfestival.ca if they have questions or comments.

“The vision of the Powell River Film Society is film as a cultural and economic driver in the community,” said Shilling. “Restoration and preservation of the Patricia Theatre is central to our mandate. It holds a special place in the heart of the community and is the crown jewel of Townsite.”