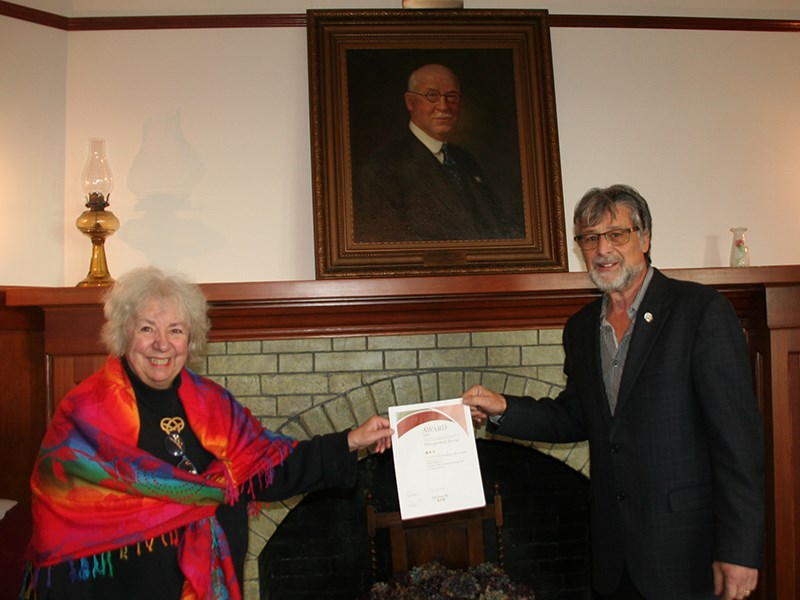 RECEIVES COMMENDATION: Townsite champion Ann Nelson was given an award by Heritage BC, presented by Powell River mayor Dave Formosa, for her distinguished service with Townsite Heritage Society and as a promoter of the historic district. Contributed photo

Townsite resident, businessperson and volunteer Ann Nelson has been recognized by Heritage BC for her work in the historic district.

According to an award bestowed on Nelson, the board of directors of Heritage BC wishes to recognize her contributions and accomplishments with an award of distinguished service. The award reads: award of outstanding achievement has been conferred on Ann Nelson, volunteer with Townsite Heritage [Society] and Townsite promoter.

The award is dated May 8, 2020, and Nelson was to have been presented the award by Heritage BC in Chilliwack, but because of the COVID-19 pandemic, the awards ceremony did not take place. Instead, mayor Dave Formosa stepped in this month, meeting with Nelson at Henderson House to congratulate her on the award and to take a tour of the living museum, home of Powell River’s first doctor, Dr. Andrew Henderson.

Recognizing Nelson’s contribution to Townsite, Heritage BC stated: “For over 20 years, Ann Nelson has volunteered with a commitment to promote the value of the Townsite within the neighbourhood and also within the larger community of Powell River.

“She has been a force driving the revived annual heritage home and garden awards and a mix of fundraising ideas. She produced the 100th anniversary celebration in 2010 and played a strong role in the acquisition and restoration of Henderson House Living Museum, promoting the importance of restoration of the house in its original form to provide inspiration and a teaching lab for building owners in the national historic district.

“Ann Nelson has been an outstanding contributor and non-stop volunteer.”

“I had no idea that anyone noticed what I did because I don’t do it to be noticed,” said Nelson. “My first reaction was that I felt there are other people in town who work really hard at heritage preservation and should be acknowledged as well.

“I finally came to grips with maybe their turn will come but right now I should be gracious and I’ll just keep doing what I do.”

Nelson said it was great to receive the reward from Formosa at Henderson House because she was dreading the trip to the Lower Mainland in May when the awards ceremony was scheduled. She said hers was one of several awards Heritage BC bestows on an annual basis. The awards are typically given at Heritage BC’s annual general meeting.

Nelson said the award is about Powell River and the fact the community is being acknowledged within the greater heritage preservation community.

“It’s a good thing for Powell River,” said Nelson. “It reminds people that we are distinctive among other heritage sites in BC because we were the first national historic district to be designated in 1995. There have been others since but we were the first and we have an important place in Canadian history.

“I’ve settled into the fact that Powell River is pretty special and whatever we can do to get it acknowledged and remind people that we are pretty special is a good thing for all of us. We all get to share the lustre, as it were.”

Nelson said the community’s contributions in Canadian history are quite often underrated or under observed because it’s hard to grasp how significant the paper industry was in terms of expanding communications, especially in the early parts of the last century.

“We were providing the vehicle for that expansion of understanding, knowledge and communications,” said Nelson. “It’s a big deal, not just to us, but in Canadian history. Our mill, being so successful, was in a position to create inventions that changed the face of the timber industry on the coast. Innovations took place in Powell River and stimulated Powell River because of that very dynamic leadership of the people who founded us.

“We are not a little iconic roadside attraction. There’s some power behind what we have contributed to the developing history of our province and our country.”