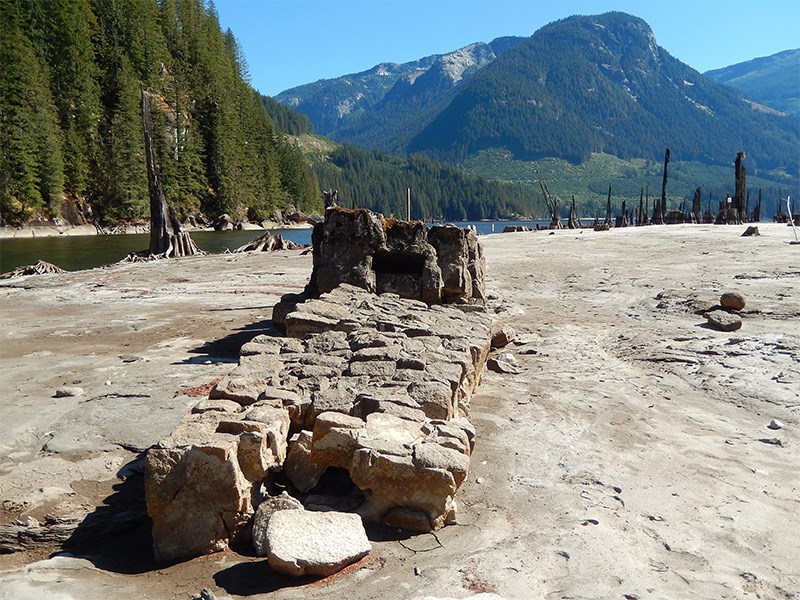 STORIED STONES: Remnants of an early Powell River settlement have recently surfaced due to low water levels on Powell Lake. The ruins of a chimney from about 100 years ago marks where Jasper Mallory Daniels Senior and his family homesteaded on the shores of Powell Lake. Margy Lutz photo

As a result of extremely low water levels over the summer, rock ruins have been exposed near the head of Powell Lake. Their story involves a piece of Powell River history outside of well-worn, mill-town memories.

For the most part, Powell River Company records have determined the scope of historical research into colonial settlement in Powell River.

“All the real documents created in this community are from the mill, by people in Townsite or people working for the mill,” said Powell River Historical Museum and Archives collections manager Nikita Johnston. “There are a lot of other little stories hidden around here.”

The story of Jasper Mallory Daniels Senior and his family is one such tale.

“There are so many stories,” said Daniels’ great-granddaughter and Powell River resident Lee Bastock. “He really was a character.”

“We were on a boat trip to the head of the lake with a friend who has known about the chimney for years,” said Lutz.

Lutz and her husband Wayne live in a float cabin on the lake and have written more than 20 books about present-day life in the Powell River region and Pacific Northwest.

“We went up to the mouth of the river and there was the chimney,” said Lutz.

Lutz took photographs of the old rock and mortar chimney and posted her find on social media.

“It makes you wonder who lived there or had a cabin in that picturesque spot,” she said. “Water and silt have washed away everything except for the well-made chimney.”

These type of discoveries start new investigations, according to Johnston.

“You have to basically play detective and trace these little facts through history and try to find little obscure references in other texts,” said Johnston. “Eventually, you can often uncover the story in some form of completeness.”

Almost conclusively, the rocks mark the spot where Daniels Senior homesteaded with his family at the turn of the century. He and his wife Catherine had four children, including Jasper Mallory Junior, Lois, Katherine and Wilma.

Jasper Junior became a famous wooden shipbuilder and sailor in the Salish Strait. He changed his name to Allen Farrell after a meeting with Kabalarians, a philosophical society that holds numerology as one of its tenets.

Farrell’s adventures have generated a lot of interest. He and his wife Sharie have been written about in at least two books, including Sailing Back in Time: A Nostalgic Voyage on Canada’s West Coast by Maria Coffey and Salt on the Wind: The Sailing Life of Allen and Sharie Farrell by Dan Rubin.

“Most people don't know about Jasper Daniels Senior and his homestead at the head of Powell Lake,” said Bastock. “I don't think people really think about old homesteaders and where they lived.”

Lutz described the spot where she took the photograph as a large, flat, sandy beach. Rubin’s book includes a reference to the Daniels homestead that states, “On a bare, stump-strewn flat beside the waters of Powell Lake, they built a sturdy log home with a fieldstone fireplace encircled by a picket fence.”

According to Rubin, Daniels Senior worked at a variety of jobs on the lake and was a gentleman who educated himself and was always well-dressed.

Bastock said the family was forced to leave when Powell River Company began construction on a dam in 1910 and the water level slowly rose.

“They didn't live there for a long time because it got flooded,” said Bastock.

This summer, Powell Lake’s water level dropped 1.5 metres due to work being done on the dam owned by Brookfield Renewable Energy Group. Brookfield manager of compliance and licensing Debbi Stanyer said the water level had to be lowered to replace the dam spillway. The work is expected to be finished in November.

According to the book Powell River 100 by Barbara Ann Lambert, homesteaders and squatters whose land would soon be flooded by the dam were furious, because it was good land.

“They often had their orchards near the water,” said Lambert. “They were losing quite an amount of acreage on excellent land.”

The financial settlement was not enough for Daniels Senior. According to Rubin, he was determined, intelligent and independent and prepared his own court case right down to a model of showing what had been lost when his homestead was flooded out.

Bastock concurred that her great-grandfather went to court on his own.

Daniels Senior then became a map maker, which Bastock said explains the naming of the Daniels River and Daniels Valley.

“I even heard that Lois Lake is named after one of his daughters,” said Bastock.

Daniels Senior was born in Iowa in 1889. He may well have been the first draft dodger to settle in the Powell River region, almost 60 years before the counterculture hippies and Vietnam War draft resisters arrived in the Lund area.

“He was running from a war,” said Bastock.

According to Rubin’s book, Daniels Senior deserted from the United States military. If he had not crossed the border into Canada, he might have been shipped overseas to fight in World War I, which adds interest for Johnston.

“That’s interesting to me because he is the original draft dodger to the area before the group in Lund, which is really fascinating,” said Johnston.

Rubin also wrote that Daniels Senior decided to head north because of a resistance to organized violence.

Johnston said there are two types of people who came here at the turn of the century, people trying to get away and people trying to make a new home. Daniels seems to have been both, she said.

“I love finding these little legends,” said Johnston, “that end up being true or based on some kind of fact.”