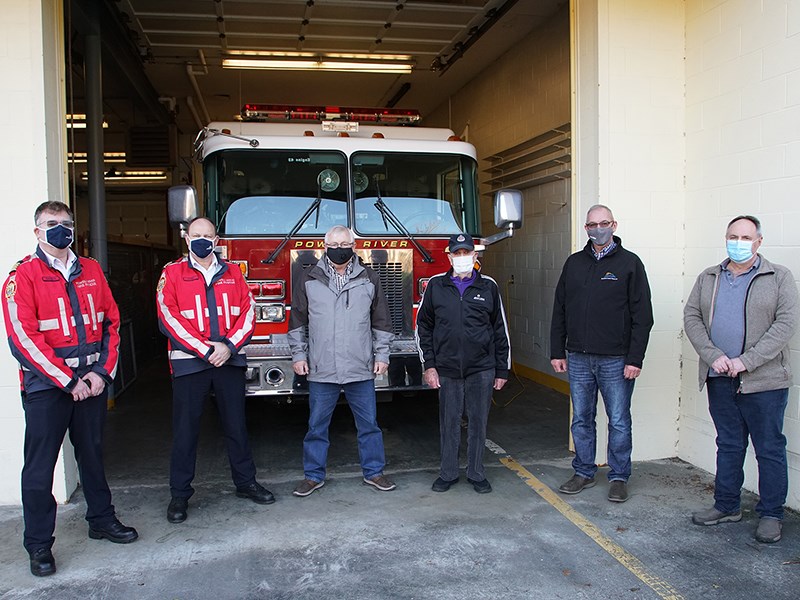 A group of fire chiefs and deputy chiefs met at the old Cranberry fire hall on the last day City of Powell River owned the facility, to reminisce and remove the remaining apparatus from the building.

On January 22, for $500,000, ownership of the fire hall transferred from the city to School District 47, which had been leasing a portion of the building to house its school bus and vehicle fleet. The hall was decommissioned as a firefighting facility by the city in the 1990s.

On January 21, current fire chief Terry Peters said the last piece of equipment the fire department was going to pull out before the school district took over the building was the spare truck.

Peters said the old hall has a massive amount of history. The last day in the facility for the fire department was September 15, 1994.

All of the firefighters who gathered for the send-off had served at the Cranberry station during their careers, other than current deputy chief Rocky Swanson.

Wayne Langdale was the last fire chief who left the building. He moved over to the current Westview fire station and operated it as chief until his retirement.

Current fire chief Terry Peters said the old fire hall was a good facility but the inhibiting factor was its location. He said it was built in 1970 under the 1970 building code so it doesn’t meet any current post disaster requirements.

“This is actually better than the one we’re in but it’s the location,” said Peters. “In 1994, the city council of the day decided that since the majority of calls were in the Westview area that they were going to move into the Westview hall temporarily.

“A committee was formed and they were going to build a new facility because that hall [Westview] was a temporary hall and was never designed to be our main station. We’re now coming into our 27th year that the whole process has been happening.”

Peters said the hope is that with closing the chapter on the Cranberry hall, now that the city has money from the sale of the building, it can move toward having a referendum, so the community can make an educated vote on construction of a new emergency services facility.

Peters said with the sale, the fire department is going to have to move its spare truck to the municipal works yard, where hopefully, room can be cleared in the bus garage to house it.

“We are literally bursting at the seams with our facilities,” said Peters.

He said he is the last firefighter working who worked in the Cranberry fire hall. All others have since retired.

“My entire staff have never worked in this facility,” said Peters.

He said former chiefs Dean Gerhart and Dan Ouellette, who were in attendance at the send-off gathering, were active in trying to resolve the fire hall situation and he has carried on the effort during his tenure as fire chief. Peters said he will be retiring in two and a half years and will not see the new fire hall before he retires.

“If I can get that into the ground and hand it over to the next fire chief, that will be great,” said Peters.

He said the new emergency service building will be the community’s facility.

“We’re just trying to get across that we need post-disaster standards because the city doesn’t own a post-disaster building,” said Peters.

Gerhart said when the move was made to Westview, the majority of the fire department’s calls were in the Westview area.

“That is really what caused us to move out of Cranberry,” said Gerhart. “We had to pick the hall to be in and you want to be in the area where you are busiest.”

Ouellette said the office of the fire commissioner came in and did a review of the fire department and at that time, the department was running crews with one firefighter in Westview and another in Cranberry.

“We were running one person on a fire apparatus and the standard is four,” said Ouellette. “The fire commissioner’s representative asked if we were crazy and recommended that we consolidate our staff.

“There’s a lot of things that came into play for this to happen over those many years. That’s where we are today.”

The Cranberry hall is quite a bit bigger and fitted the department’s needs, said Ouellette. However, the department still made it work at the Westview hall.

“It was tight then, it’s tight today, and will continue to be until a new station is built.,” said Ouellette. “We are innovators and we made it work.”