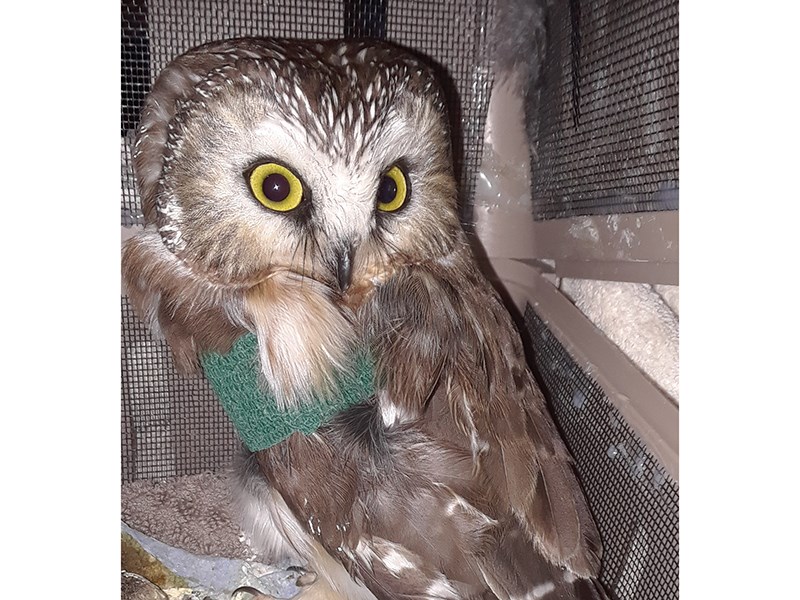 This saw-whet owl was unable to stand upon its arrival at Powell River Orphaned Wildlife Society.Contributed photo

This unfortunate northern saw-whet owl was pinned down in a rat trap. When the trap snapped shut across her shoulders, her head was forced to kink backward in a painful position. Amazingly she was not killed outright.

When she arrived at Powell River Orphaned Wildlife Society, she was not able to stand unaided. By the next morning, she was actually standing and very cranky, definitely ready for the mouse that was dropped into her cage.

She kept getting stronger and a few days later was flown by Pacific Coastal Airlines to OWL (Orphaned Wildlife Rehabilitation Society) in Delta to see what they could do for her. When her wing proved to be beyond recovery, it was decided euthanasia was the best choice.

Rat traps should be kept under the cover of at least leaves.

Saw-whets are very small owls, the size of robins, with large rounded heads comprising about one-third of their body, fierce yellow eyes and no ear tufts. Mixed-species flocks of songbirds will mob the predator in an effort to drive it away.

Tuning in to all that commotion is one of the best ways for birdwatchers to find these well-hidden owls, as well as listening for the shrill penetrating “TOO-TOO-TOO” call of the male.