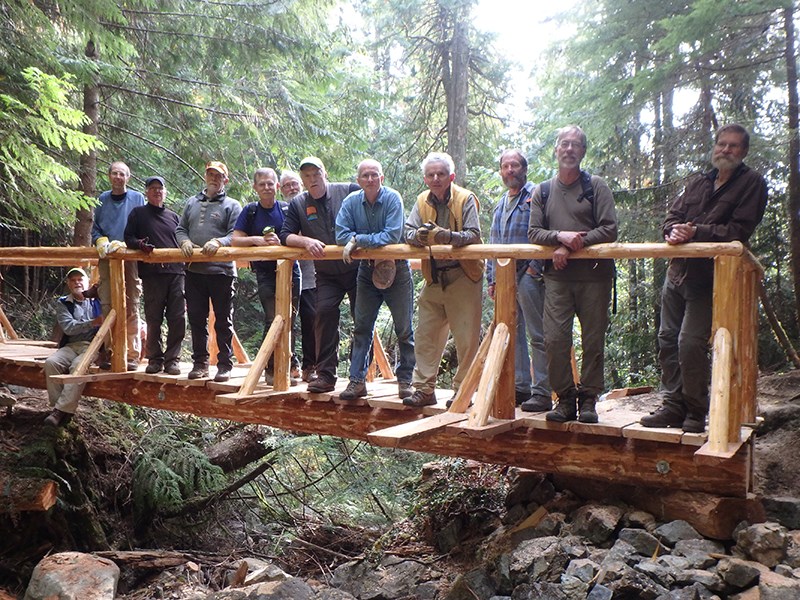 Work on a kinder and gentler trail to Confederation Lake has been completed by Powell River Parks and Wilderness Society (PRPAWS) volunteers.

“It's tough but it's a lot nicer now,” said Glaspey.

For many who have hiked or run up the 12 kilometres, including steep switchbacks, to the lake and cabin at about 700 metres in elevation, Glaspey said the old trail was horrible.

“It was killer,” he added. “For about the first 500 metres it was just uphill, ugly and really steep, and then it gentled out.”

Work on the new trail began in May and took about two months for Glaspey and Brian Johnson to find a better way.

“To our delight we wandered across a creek and discovered an old logging road that went up for 400 metres at a gentle pace,” said Glaspey. “Then we started looking for places to connect that to the old trail and cut out parts.”

About 700 volunteer hours went into the 1.5-kilometre reroute and other trail work that began in July. PRPAWS also collaborated with BC Parks on the trail around Confederation Lake.

“By about the end of September/October we were more or less finished with the trail and we started thinking about this bridge which we needed to get across this creek,” said Glaspey.

The bridge was built about 50 metres from a beautiful waterfall, he added.

Powell River Trail Running Group member Joseph McLean said he has run portions of the new route while under construction and hiked the first part by the waterfall.

“It may be the largest waterfall on the Sunshine Coast Trail by height, and it’s always been right there just off the old route,” said McLean. “You could actually hear the falls on the way up but you couldn’t see them. Later on, the trail follows the creek quite closely through a beautiful stand of forest, again so close to the old route but so different. You can see the care and consideration that was put into every twist and turn, obviously made with many helping hands.”
Being less steep, McLean said the trail will be easier for backpackers and for when the ground becomes icy.
“It’s a great improvement, but I hope the traditional route isn’t erased,” he added. “Our running group loves that original, iconic climb through towering old growth.”

Glaspey said the new route is substantially changed at the beginning, eliminating the first section of trail, which is old-growth fir.

“Where we're going now is a newer forest and then it moves into a combination of old-growth fir and cedar,” he added.

Confederation Lake Trail is accessed off of the Inland Lake Trail.