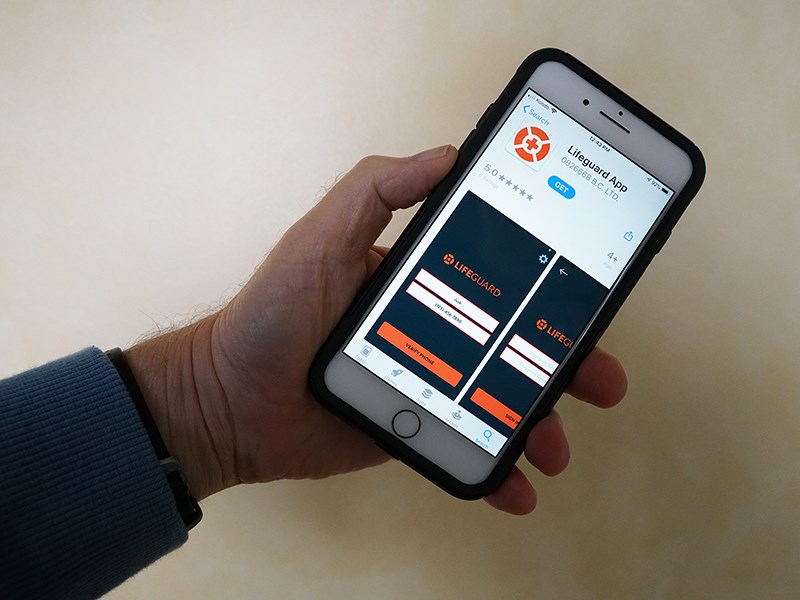 LIFESAVING APP: The Lifeguard app is now available on app store websites to help those who use drugs alone to protect themselves in case of overdose. Paul Galinski photo

A new made-in-BC resource called the Lifeguard app is being made available in response to the overdose crisis in the province.

The way the app is set up, it is activated by the user before they take their dose. After 50 seconds the app will sound an alarm. If the user doesn’t hit a button to stop the alarm, indicating they are fine, the alarm grows louder. After 75 seconds a text-to-voice call will go straight to 911, alerting emergency medical dispatchers of a potential overdose.

Dr. Geoff McKee, Vancouver Coastal Health medical health officer, said while a lot of attention has been devoted to COVID-19, the province is still in a public health emergency related to opioid overdoses in BC.

“In fact, despite the decrease in overdose deaths we saw in 2019, there has been an increase provincially in 2020, as per the recent coroner’s report, particularly since the implementation of stay-at-home measures related to the pandemic,” said McKee.

“Stigma around addiction results in many people who use drugs to use alone and that’s a reality that really needs to be addressed. More than ever, we are urging people not to use alone, and to buddy up or access local overdose prevention services.”

McKee said the Lifeguard app is another innovative tool in the toolbox to support people who use drugs alone and face the risk of overdose.

“While we would still encourage people to access overdose prevention sites when possible, if they are going to use, this isn’t always an option, particularly for people outside of urban areas,” said McKee. “In these situations, having another option can really be a lifesaver.”

McKee said operations of overdose prevention sites have been challenged by measures introduced in response to the pandemic.

“There are ongoing discussions about how this service can be provided while adhering to necessary infections and control precautions, but in the meantime, it is helpful to have a tool like this, or an app, as another option.” said McKee. “It might not work the same for everybody, and really, we do need multiple different tools to help address the risks of the overdose crisis.”

For people who are using substances, McKee said Lifeguard is definitely an option to be considered.

“It won’t replace services like overdose prevention sites, where there is actually someone in person to be there to attend to any overdoses, to provide guidance and also linkages with health care services, et cetera,” said McKee. “It isn’t a replacement but we know there isn’t one tool that works for everybody. There are various reasons why people may use in different locations, they use in different circumstances. This is just another option to provide an extra level of support for people who intend to use substances, including opioids.”

McKee said there are multiple pillars in overdose response, so it’s important for people to know that while Lifeguard is a tool that can be used, people need to be aware of other intervention and services that, even in the COVID-19 response, are still available.

“For example, addiction and mental health services continue to be available in Powell River, although they are looking a bit different lately with the use of virtual visits, in some cases,” said McKee. “Also, for urgent medical care, the emergency department is still open and this is the point I always try to stress. In the middle of the COVID-19 pandemic, people shouldn’t avoid getting urgent care when they need it, and that includes in the cases of substance use-related issues.

Kathryn Colby, coordinator of Powell River’s Community Action Team (CAT), said the team has known this app has been in the works for some time. She said it was piloted in some single room occupancy supportive housing centres in Vancouver.

“Everyone wanted to make sure it works and that it’s effective, that it’s safe and easy to use,” said Colby. “They’ve been working on that for probably about a year. We’re thrilled that it’s out and available for anyone who uses drugs, even recreationally.”

Colby said the CAT advocates that people not use drugs alone and it’s important they use with someone trustworthy, who can effectively respond or hold people’s confidentiality and dignity.

“A lot of people actually don’t have access to that,” said Colby. “In a rural context, so many folks use alone because they have so much shame around drug use. We feel like this is a way to reach folks and respond to folks who would otherwise slip through the cracks.”

Colby said she is working with vulnerable populations and one of the things identified is that a number of people are “tech insecure.”

“We’ve decided that any time we provide someone with technology that it comes loaded with the Lifeguard app,” said Colby. “It’s a gentle, non-judgmental way of letting folks know we do understand drug use is very common and we want people to be safe.”

“We are definitely hoping people will use the Lifeguard app if they want to and also still use other services available,” she added.

COVID-19 has forced overdose numbers to rise, said Colby, including fatal overdoses. She said it’s extremely important that in a rural context, there are as many tools as possible that people can utilize.

Single working men are an especially in-danger demographic that do not connect around substance use in the community, she added.

The Lifeguard app can be downloaded at both the Apple App Store and Google Play.