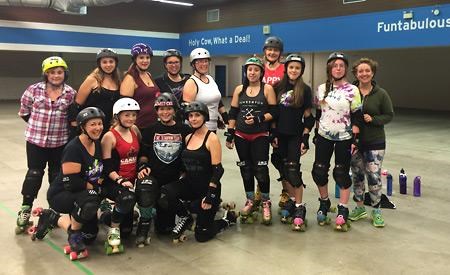 Pow! Town Roller Derby is rolling out the welcome mat for skaters in its new winter practice space in the former Liquidation World site on Joyce Avenue.

Now affectionately known as the “Thunderdome,” the former discount store is alive with shouts and laughter as derby league players stretch their skates in the large, open space.

“It has been our goal to bring roller derby to this facility since 2011,” said Nicki Lister, coach of the Pow! Town adult league. “Now that we’re here, it’s a dream come true.”

The new space comes as quite a relief for Lister, who said she found out last spring that derby’s usual practice space in the Oceanview School gym would be unavailable.

“It was just this feeling of panic, not having a space to practice,” said Nicki, who found out while daughter Emily was at the World Cup Roller Derby Championships in Washington State, winning third place. “I thought, ‘We have members on Team Canada, how can we not have a practice space?’”

According to Nicki, the new space has two side-by-side tracks and enough space for simultaneous adult and youth practices, something important to keeping Powell River roller derby a community sport and safe space.

“Everybody is so welcoming here because it’s such a positive sport,” said Nicki. “If you’ve had a bad day you just come and skate and immediately feel your spirits lift.”

The new centrally located space is already attracting attention and Lister said she hopes more visibility will bring more people in to check out the roller sport. There are even plans to bring in other teams for skrimmages.

“Our goal is to bring the community in and share what roller derby is all about,” she said.

Pow! Town was able to set up its new practice area during the last week of September after property owner Jack Barr leased them the space.

“It was sitting there vacant, so why not put it to use?” said Barr. “The arena-type space will allow them to bring other teams in, so it’s a win-win situation for Powell River.”

Although Barr hasn’t yet had a chance to take in a derby match, he said he looks forward to doing so in the future.

For player Chelsea Caul, also known by her derby name Frisky Feline, it’s just a great way to put some excitement in her day.

“My job as a bookkeeper is pretty quiet,” laughed Caul. “I come here so I can have fun.”

Pow! Town will be holding an open house at their new space from 11 am to 2 pm on Sunday, October 25.