Ean Jackson is learning about his new surroundings while on the run
May 28, 2021 10:00 AM By: Alexander Cosh 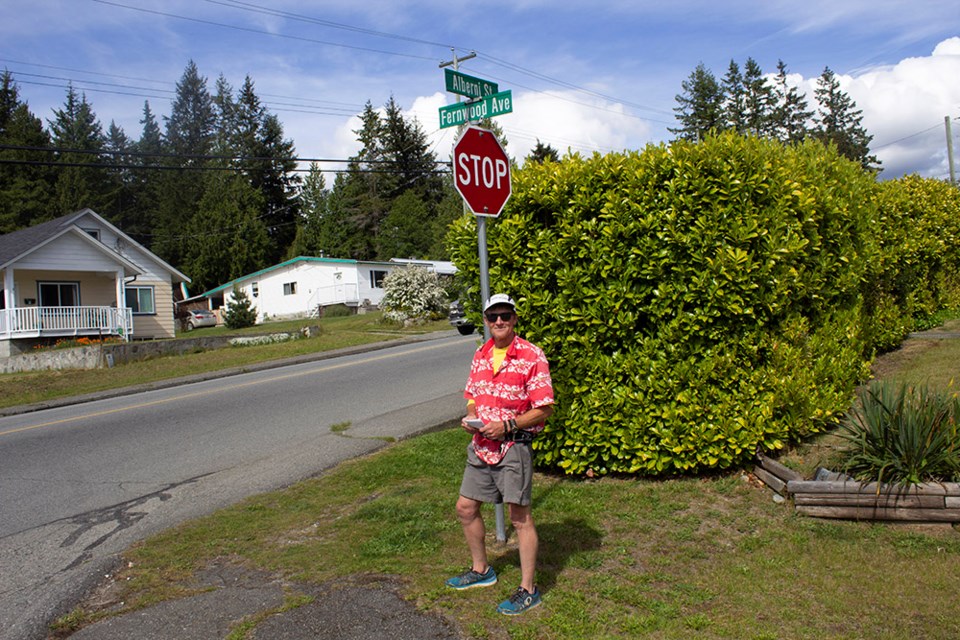 GALLOPING GOAL: Trail runner, triathlon competitor and ultramarathon athlete Ean Jackson holds a Google Maps printout of the streets he is running in Powell River. As a new resident, his goal is to run every road in town to help learn his new surroundings.Alexander Cosh photo

If you’ve ever wondered what it would be like to try to run down every street in Powell River, just ask Ean Jackson, who is pursuing the unofficial title of “Forrest Gump of Powell River.”

“I don’t care if people think I’m nuts or not,” said Jackson, 63. “This is very new to me; I only started doing this a month ago, and it’s become really fun for me.”

A longtime trail runner, triathlon competitor and ultramarathon athlete, Jackson moved from North Vancouver just over a month ago, and decided to take up the challenge of running every single street in Powell River as a way to familiarize himself with his new home.

“I just thought, what better way to get to know the place you’re going to than to run all the streets?” said Jackson. “It’s been really fun, I have to say. It’s put the excitement back in my running, it’s given me a goal every day. You see places. You get to know your street names, and what’s there. I found it an incredible way to get oriented.”

Using a pair of apps called Strava and CityStrides, Jackson has been able to track his progress and share his accomplishments with friends. Strava tracks each individual run, and CityStrides imports the data from Strava to track the user’s overall progress in any given city.

“It’s fun in that my friends around the world know what I did today, and I know what they did,” said Jackson. “I’m really getting into this. It’s almost addictive.”

The challenge hasn’t been without its frustrations, however. Recently, Jackson drove to Townsite, where he ran every street in the neighbourhood, before making his way back to his home in Westview.

“On the way back, I thought ‘I’m going to stop the car, and I’m going to bag another 10 streets, because I need to mop up some stuff in Westview,’” explained Jackson. “I went to Strava to download my accomplishment and, for whatever reason, I didn’t turn it on, and it didn’t record. That meant I had to go out and do the same thing again.”

Besides being a great way to stretch his legs after long days of working behind a computer (Jackson coaches entrepreneurial skills, working remotely) the challenge has proved to be a great way to meet new people, said Jackson.

“A man sees me running down his lane, it’s three houses long; I run by and say hi; I run two houses down, the thing comes to an end and I turn around and come back, and he turns around and looks at me and says, ‘do you want to know how to get through there?’ I said, ‘no, I just have to run every street.’ The guy said, you’re nuts!’ We had a great laugh,” recalled Jackson. “I get to see people smile. I start to recognize people who are out in their gardens, and I ask them about what they’re growing. I’m meeting tons of people that way. Everyone is super friendly in Powell River. I have not had a bad experience yet.”

Despite having already completed an impressive 77 per cent of the 273 streets counted by the app in the city, Jackson is currently in second place to another local runner who has so far bagged 98 per cent of the streets in town.

According to Jackson, that runner stopped some time ago when he realized the streets included small cul-de-sacs and parking lots. After parlaying with the competitor, Jackson said he is unsure whether the pair will now finish the remaining streets together, or whether one of them will complete the challenge first.

“I’ve got a bunch of territory to run still,” noted Jackson. “It’s a lot of distance.”

And, despite his determination to complete the challenge first or at least together with the other local competitor, Jackson encourages anyone else in town with a passion for running to try out the challenge themselves. In fact, he said he would like to set up a Facebook group to get more local people involved in similar activities.

“The technology is free to anyone who has a cell phone,” said Jackson. “It’s really fun.”

Having completed a modest 2.5 per cent of streets since meeting Jackson, this author can agree.