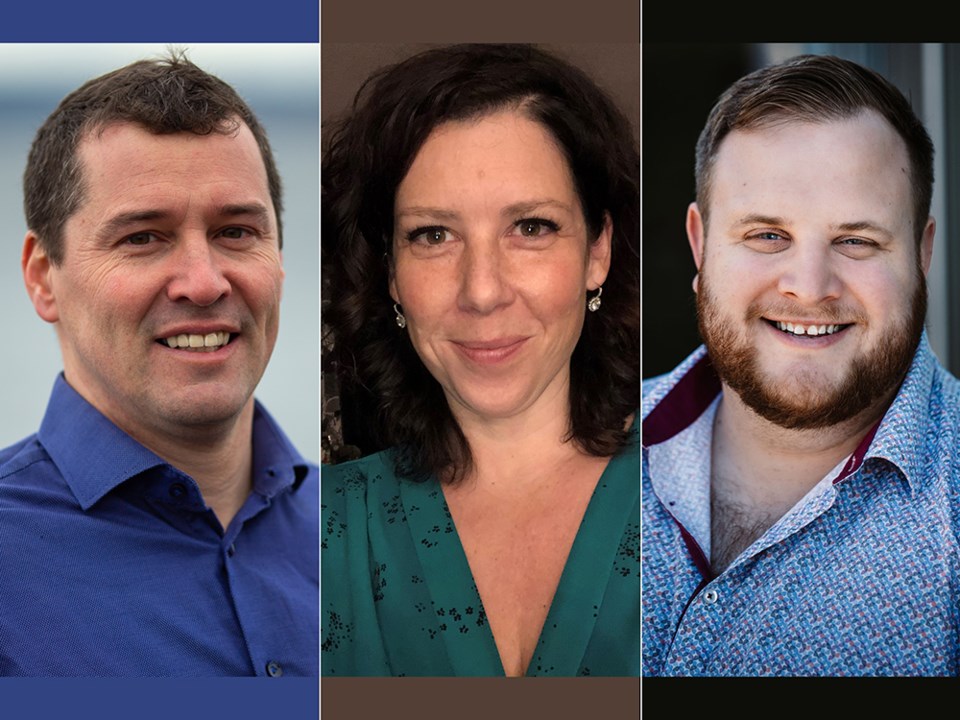 Brendan Behan [left] received the most votes in the recent Powell River Board of Education school trustee byelection to claim one of three empty seats in School District 47. He will be joined on the board by Jaclyn Miller [centre] and Robert Hill [right].Contributed photos

Between them, School District 47’s three newly elected trustees say they will prioritize work on student mental health, graduation rates, public transparency and outreach with Tla’amin Nation over the next 18 months.

Candidates Brendan Behan, Jaclyn Miller and Robert Hill were each elected on April 24 to the board of education, winning 685, 647 and 475 votes respectively. The new trustees will be sworn in on May 12, and orientation begins on May 17.

All three victorious candidates hailed the voter turnout, which saw 1,232 individual ballots cast for a turnout of seven per cent of eligible voters.

While that turnout figure might seem low, for comparison, a school board byelection in the Comox Valley last December saw just 129 valid ballots cast in an electoral area within School District 71 that has a population of more than 5,000.

“We could always ask for more people to come out and vote,” said Behan, “but there was a really strong showing by our community, especially during COVID and during the byelection, so I think that was quite impressive.”

Behan said he is grateful for the support he received.

“My initial reaction is excitement, complete gratitude and very humbled by the amount of support and engagement by the community,” he added. “I also think it’s really important that we also acknowledge that every candidate, those who were successful and those that weren’t, deserve an expression of appreciation for putting their name forward and sharing their values and beliefs.”

The trustee-elect said he hopes to work as a team with other trustees, and will be prioritizing the four issue areas he pledged to tackle during his campaign: youth mental health; graduation rates, which he said are behind the provincial average; transparent communication; and listening to the needs of educators.

“Our teachers, principals, they know best,” said Behan. “Ultimately what happens in the classroom is really what matters, and I think a successful school board is advocating for the most appropriate supports possible as led by the educators.”

Miller also wants to make addressing student mental health a priority for the district over the coming months.

“We have a youth mental health crisis that we need to be a part of addressing as a school district,” said Miller, “so that is probably my number one priority.”

Miller noted there is currently a family school liaison position that has been invaluable in terms of connecting students with support services. The new trustee wants to see that program expanded in order to help reduce waiting times for access to youth mental health support.

“The mental health concerns are just going to continue to be increased with the COVID crisis, so it’s just about putting in supports,” explained Miller. “And we need to make sure we’re not putting it onto the teachers because the teachers aren’t trained for that.”

“[The completion rates] are lower, and they don’t need to be,” she added.

While the onboarding process for new trustees is likely to be a steep learning curve, Miller said she hopes her experience working for other local agencies will facilitate that process.

“The relationships I’ve built with other agencies are going to be really beneficial in this role as school trustee,” said Miller. “That’s one thing about Powell River, relationships between agencies makes everything easier, and it helps connect people faster.”

Hill, who at age 29 is SD47’s youngest trustee, hopes his experience growing up in the local education system will provide insights into the needs of today’s students.

“All of us trustees, no matter our age, are kind of removed from the experiences of what our students from K-12 are going through today,” said Hill. “I’m only 12 years out of high school, and having been a former SD47 student who went through the budget cuts in the early 2000s and whatnot, I feel like I have a good understanding of our students today.”

Hill has three children, including a son in grade one. A key priority for the trustee-elect is using technology to facilitate access for parents and the broader public to school board meetings.

“We’ve been in a pandemic for a year, and I think we need to do more to bring the public into the school board,” said Hill .

Over the next 18 months, Hill wants to trial his proposal to establish a student trustee position, and said he also looks forward to working with Tla’amin legislators.

“They’ve elected a lot of really young people as well who are really keen about the future of their students,” he added.

Reactions from other candidates

Candidates who weren’t elected expressed gratitude to voters for turning out, and thanked those who put their names forward to run.

“The SD47 board has hard work ahead of them,” said Rob Hughes in a statement. “I appreciate anyone who is willing to raise their hand and say ‘I will do it.’”

“I’m just looking for ways that I can contribute in the community where I can help the community just to be the best it can be,” said Craig. “I’ll be doing that just because that’s who I am.”

Serena Gill echoed that sentiment with a similar pledge.

“The past two months have been very inspiring, and I look forward to getting involved with the community in other ways,” said Gill. “I will always be a passionate advocate for students and will help increase our environmental sustainability in every way possible.”