Book by Powell River author tackles questions about the universe 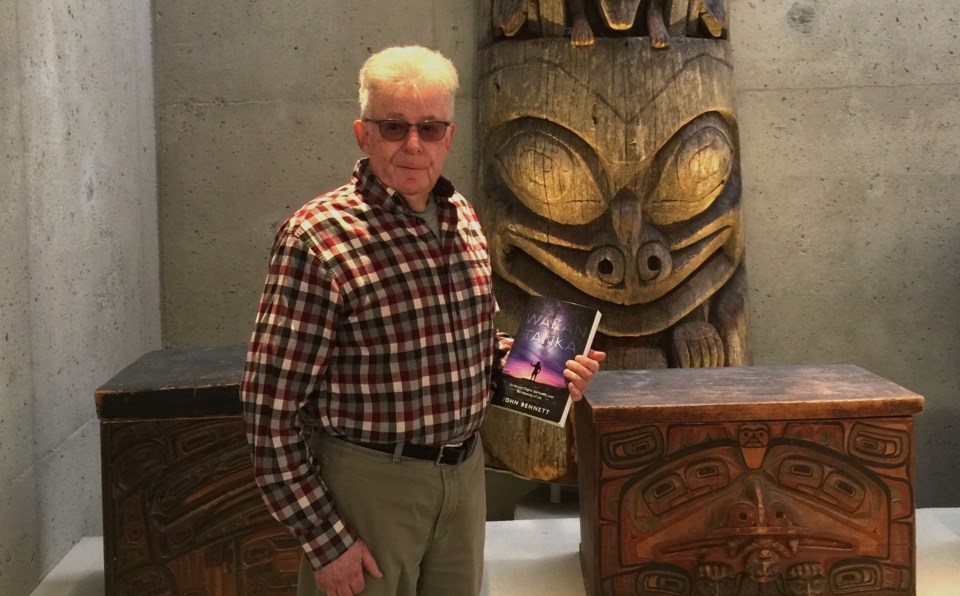 DECADE OF DEDICATION: Dr. John Bennett spent 10 years researching and writing his first book, which delves into fundamental questions about the universe, where people came from, human spirituality and the purpose of life.Contributed photo

Local author Dr. John Bennett recently released his first book: Wakan Tanka: On Human Origins, Spirituality and the Meaning of Life. Wakan Tanka is from the language of the Lakota Sioux people and translates to “The Great Mystery.”

The book tackles life’s fundamental questions about the universe, where we came from and the purpose of life itself.

Originally from Ontario, Bennett came west to obtain his PhD from UBC before he spent a 34-year electrical engineering career at Canadian aerospace company MacDonald Dettwiler and Associates (MDA). He spent most of that time pioneering development of advanced imaging radar systems for remote-sensing satellites and aircraft.

“John MacDonald was at UBC when I was doing my degree there, in fact, he was my thesis supervisor,” said Bennett. “While that was happening he was just starting MDA in the basement of his house. When I graduated he asked me if I wanted to join him. At that time he had three employees working in his basement.”

Bennett initially turned down the offer and returned to Ontario to work for Bell Canada doing research. MacDonald ended up visiting Ontario and said he had the perfect job available at the firm for Bennett, who accepted the offer and headed back out west. When he joined there were only 20 employees; by the end of his career there were more than 4,000.

Bennett, who moved to Powell River in 2007, said he didn’t originally set out to write a book. Having had a lifelong passion for evolution, cosmology and philosophy, he simply wanted to acquire knowledge to personally answer some of his own burning questions about these diverse fields. He also felt there was no book that gave an overview on how humans evolved from the extinction of the dinosaurs through to modern times.

“When I first began to explore these things it didn’t occur to me to write a book; I was more interested for myself,” said Bennett. “I have a very inquiring mind, I’m a scientific-oriented person, I approach things from a scientific perspective.”

Bennett said he likes to know how things work and why things are the way they are, which is what led him into exploring these topics.

"I’ve always had a strong interest in all things science, including evolution, paleoanthropology and particularly cosmology, the branch of physics devoted to studying the origins of the universe,” he added. “Ever since I was a kid I remember when King Tut’s tomb was first discovered in Egypt. The magazines were full of pictures. I started my own scrapbook on archaeology with all these beautiful pictures of all these discoveries and it continued from there.”

10 years in the making

His book took 10 years to write due to all of the research put into it. He points out that there were still interesting discoveries being made around the world in palaeontology as recent as 2019/2020 that needed to be included.

Part one delves into evolution, including when our human predecessors first started making stone tools and when they started to develop artistic expression in the form of body painting or wearing jewellery. It then goes on to describe how the early humans became culturally modern and proceeded to leave Africa and spread throughout Eurasia.

“In part two I get more into human spirituality, starting with what are the characteristics of the human mind, which leads us to be not only creative in terms of our technology but also what it is about the human mind that allows us to enjoy life on earth, to recognize beauty in things and appreciate the experience of living,” said Bennett. “I develop beyond that into talking about the scientific view of the human kind of soul if you like, consciousness and the philosophical view of what the ancient Greek philosophers have to say about it and the religious view, which really began back in Mesopotamia.”

He calls the fundamental questions of life the enduring questions of antiquity, such as: Where did we come from? Why are we here? What’s the nature of God if there is a God?

“If I had to summarize the entire book, what I’ve done is provide a spiritual philosophy, which is my own philosophy, but it also provides a spiritual framework that balances the scientific view of creation, the scientific view of energy, matter and the cosmos with the philosophical and religious views,” said Bennett. “I end up showing really they’re all the same pretty much, they’re just using different vocabulary and different approaches to that. My hope is that for people who may be becoming disillusioned with religion, this will form a guidance or framework with which they can develop their own forms of duality.”

Follow-up in the works

Bennett has begun to formulate a second book because as one reviewer summarized, the first book left a lot of unanswered questions.

“I do allude to the fact that humankind has got to get its act together if we are to save planet earth,” he said. “Where my first book started with physical evolution and ended up with how man became a spiritual being, in my second book I’m going to focus more on life itself.

Like it or not, evolution and nature can no longer take care of the planet, he added.

“The human impact on the planet has been so fast and so great that these natural processes can no longer cope. It is now mankind’s responsibility to take over that custodianship.”

For more information on Wakan Tanka: On Human Origins, Spirituality and the Meaning of Life, go to wakantankabook.com.