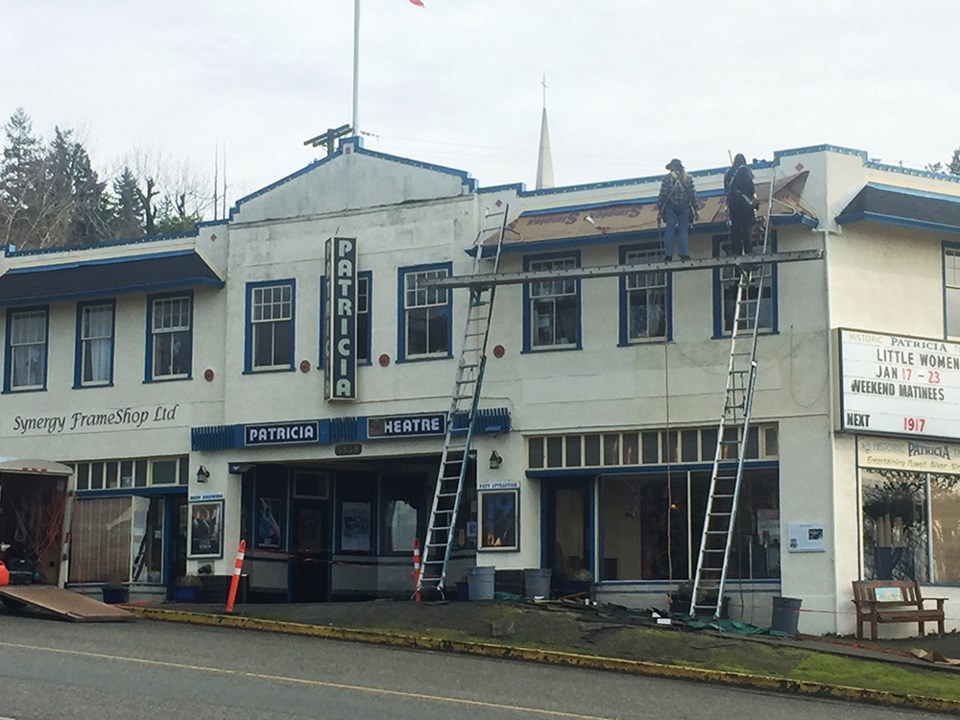 NEW AGREEMENT: The Patricia Theatre in Townsite, undergoing roof repairs in January 2020 before COVID-19 hit, has extended the purchase deadline for the Powell River Film Society until mid-August.Contributed photo

Powell River Film Society (PRFS) is working on a deadline to secure funding to purchase the Patricia Theatre.

Gary Shilling, executive director of the Powell River Film Society, said the purchase agreement for the theatre has been extended to mid-August, and extensive efforts are being made in the community to come up with the funds.

The community response has been tremendous to the film society’s fundraising efforts, said Shilling. As of the end of April, about $95,000 had been raised from the community, mostly through individual donations. Some donations are as small as $10 and some are as large as $5,000, added Shilling.

He said the film society has a purchase agreement with the Patricia Entertainment Company (PEC) and that has been in place since 2018.

“The good news is we locked into a price before real estate went crazy,” said Shilling. “They gave us a discounted price where they basically donated the good will they invested in the property.

“On the other side of that, we also made an agreement to cover taxes and insurance during that period, which amounts to about $1,200 a month. To facilitate the purchase, we had to do a number of things, such as a commercial appraisal, legal consultation, a building inspection, a mechanical assessment and other expenses. We’ve already paid almost $20,000 for just those services in order to make the purchase possible.”

Shilling said First Credit Union stepped up and renewed the mortgage that PEC currently has. PEC extended the film society’s purchase agreement, which was originally scheduled to terminate on May 4. It has been extended to August 15. The film society has agreed to pay the mortgage from the end of April to August 15 and that accounts for about $2,000 a month.

“So, if you take the taxes and insurance and the mortgage, the film society is on the hook for $3,200 a month just to keep the sale in play,” said Shilling.

He said First Credit Union has been provided a business plan on how the theatre plans to operate when it opens again.

“Even though our fundraising efforts have been great, and the community has really responded in kind, a lot of that money is taken up in the machinations of making the sale happen and keeping the deal alive,” said Shilling. “Where we have a lot of eggs in our basket is with the Powell River Community Forest. We have made an application to the community forest for a grant to help us with funding outside of the mortgage we plan to carry, and to allow us to put the down payment on the property.

“They are in the process of evaluating that application. For the moment, the feedback I’m getting is not positive. The understanding is they are looking for us to contribute to the purchase price beyond what we have already contributed. Our position is we don’t at the moment have very many funds available other than what we are currently carrying to keep the property alive.”

Shilling said on August 15 if the funds haven’t been raised one way or another, PEC has the option to put the property up for sale on the open market.

Shilling estimated there is more than $300,000 worth of community investment in the Patricia Theatre.

Shilling said he has dedicated the last five years to the theatre and he’d hate to see it slip away.

“Ultimately, if we cannot fulfill our desire to purchase the theatre, sale of the theatre to another entity is going to be the next step,” said Shilling. “I’d hate to see that happen.”

Shilling said the community continues to step forward and he is receiving donations, but at the same time, the society needs to see the bigger funders within the community recognize the importance of the facility and step up as well.

“The next couple of months will be really critical to making things happen,” said Shilling. “My message is if people haven’t donated yet, it’s not too late.”

Donations can be made by going to prfilmfestival.ca and clicking on the donate now button.