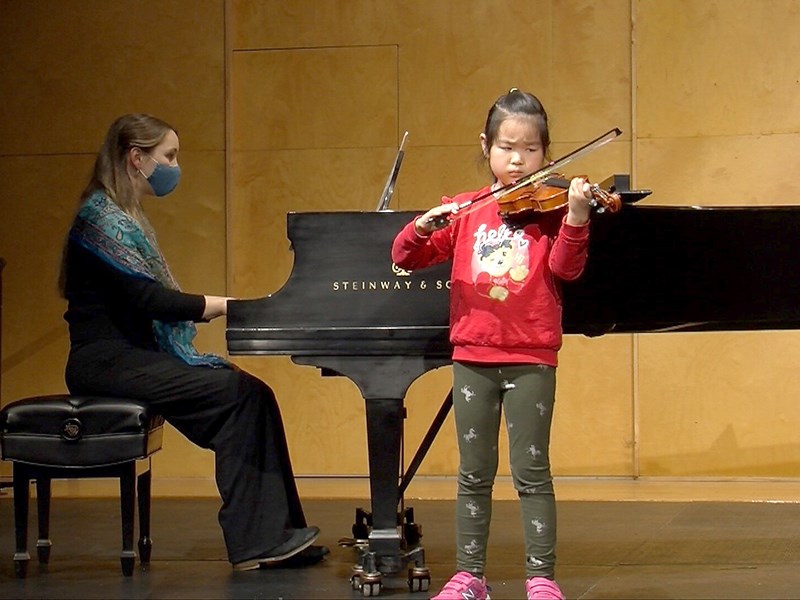 CONCENTRATED FOCUS: Cecilia Gau was accompanied by her teacher Indigo Freeman during the strings section of Powell River Festival of the Performing Arts.Sea Panda Productions photo

Powell River Festival of the Performing Arts had a different look for 2021 as the organizing committee adapted the 77th event because of COVID-19. The regular part of the adjusted festival was held February 26 to 28 in James Hall at Powell River Academy of Music.

Last March, the 2020 festival’s Grand Concert was the final event of the year in this community with an in-person audience as strict pandemic measures were introduced on March 13.

“Even with the coronavirus pandemic, our committee determined there would be a festival this year,” says chair Joyce Carlson. “Our planning started as it typically does in September.”

Plans called for individual and dance performances to be filmed by Peter Harvey of Sea Panda Productions and provided to adjudicators as well as to create a virtual Grand Concert.

“Two of our five adjudicators are out of town and three are in Powell River,” adds Carlson. “This week, they are reviewing the performances and preparing their adjudication remarks which will be written and/or videoed.”

Piano adjudicator Dr. Moira Hopfe-Ostensen recently returned to Powell River after living in Texas for 18 years. She has her doctorate in music arts, is an active pianist, educator and adjudicator.

Robin Bleasdale of Toronto has been involved with dance for almost 40 years as a performer, teacher and choreographer. She is a three-time winner of the Headliners US National Choreographer of the Year Award.

Robin Norman of Prince George is an active voice teacher, performer and director who has been teaching for over 25 years. She has adjudicated throughout the Canadian festival system.

Author Barb Rees of Powell River is a lover of spoken and written words who has been teaching communication skills for over 20 years. She was a member of Toastmasters for 17 years, winning speaking contests and helping others improve through helpful evaluations.

Harvey will work with adjudicators and committee members to select numbers that will be combined to create the Grand Concert, which will be available for viewing later this month.

“As soon as we know the date, we will make a link available for people to view,” says Carlson.

Following on the success of the Focus on Youth Concerts last year, live-streaming events are being planned for March 16 and 17. Roy Carson is coordinating the concerts with music and theatre arts teachers from all schools in the area. The concerts will be the final part of the 2021 festival.

Music and speech arts teachers from School District 47 and independent schools have submitted student performances to Carson, who has put together programs for up to four concerts that will take place at 10 am and 1 pm each day based on the final numbers.

“It’s my understanding that “seats” at no charge for the concerts will be available through a Zoominar platform that is being organized by SD47 technology staff,” explains Carlson. “We are most appreciative of Roy’s efforts to continue his vision about giving students the best benefit of the festival that started last year.”

More information about how people can view the concerts will be made available on the festival Facebook page, facebook.com/powellriverfestival.

Performing Arts BC (PABC) will also have a virtual provincial festival. All performers recommended to provincials in 2020 are eligible to participate in June. Videos of last year and this year’s performers will be submitted.

“We attended a recent Zoom meeting of PABC to hear about plans for the virtual provincial festival as well as those by the more than 30 festivals in BC who are part of the organization,” says Carlson. “The passion for continuing with performing arts festivals was evident along with a determination to come up with solutions for what everyone hopes is a one-off situation. We all want to have live audiences in 2022.”