BC Ferries to update community on working group consultations

BC Ferries is planning a virtual meeting Nov. 25 to give Sunshine Coast residents their first look at what the working group formed earlier this fall has come up with.
Nov 19, 2020 10:36 AM By: Sean Eckford 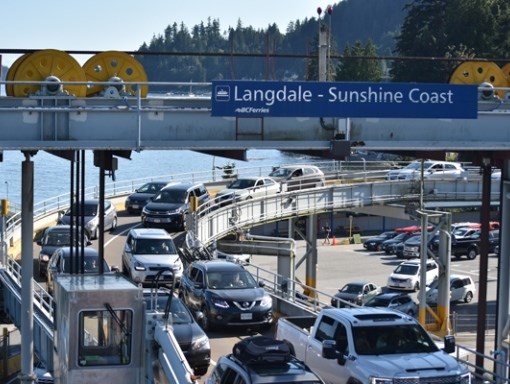 BC Ferries is planning a virtual meeting Nov. 25 to give Sunshine Coast residents their first look at what the working group formed earlier this fall has come up with.

The 19-member working group has come up with “a shortlist of potential solutions to improve ferry travel for the Sunshine Coast.”
The ideas are meant to focus on what BC Ferries is describing as the “near term,” using the assets the ferry company already has serving the Sunshine Coast.

“The proposed solutions are in the early stages of development and the engagement seeks to understand which solutions the community wants to see developed further,” BC Ferries said in a news release.

Overall, the company says, the proposals are going to address travel certainty, medical travel, better communication to make planning and travelling easier, and “demand management” to make better use of the available ferry capacity.

More details about the proposals are included in a new survey posted at bcferriesprojects.ca/aheadtogether.

According to BC Ferries, the working group is suggesting changing the reservation system to allocate more reservation space to non-commuting times to free up space on sailings that usually get more drive-up traffic, and implementing a “no-show fee” for people who make multiple reservations but only use one.

The working group is also suggesting a system of staggered reservation releases. “We could release a final block of reservations 24-48 hours before a sailing so that those with last minute travel plans can still access reservations,” the ferry company said.

A resident priority system, however, is off the table for now.

“We heard a strong desire for resident priority travel through the first phase of online engagement,” BC Ferries said. “We also heard concern about the impacts of a resident priority system, which included potential impacts on tourism and the economy if visitors and commercial traffic were unable to travel, or discouraged from travelling due to unavailability or lengthy waits [and] who qualifies as a resident and how to verify residency.”

Other ideas the working group considered, but decided not pursue any further included:

• Giving Coast residents a limited number of assured loading vouchers, which was rejected for many of the same reasons as resident priority boarding and “concern around potential abuse of such a program, e.g. selling and trading of vouchers.

• An earlier commercial-only sailing out of Horseshoe Bay, which the working group thought was “worthy of consideration but deprioritized it when looking at other, potentially more valuable solutions.”

• Separate lanes at ticket booths for medical travellers, carpools or other priority groups, which was ruled out as impractical because with a limited number of toll booths it could create bottlenecks.

The background included with the survey also addresses the question of two-ship service.

“We recognize the need for a second ship on the Sunshine Coast to support community needs and growing travel demand. Providing a second ship is possible in the future, but requires significant capital investment and a change to our contract with the provincial government,” BC Ferries said.

“While we continue to work on our long-term planning, we believe there is more we can do immediately to make travel easier, more comfortable, and less stressful for Sunshine Coast residents and visitors.”

Sechelt Coun. Matt McLean, who sits on the Southern Sunshine Coast Ferry Advisory Committee, sought feedback from other councillors at their Nov. 18 meeting, noting that “most of the proposed actions revolve around the reservation system.”

McLean said the current reservation allocation on Route 3 is around 45 per cent, and councillors were not keen on the idea of increasing it.

Coun. Eric Scott said he’d like to see the whole cost of the trip charged up front when  travellers reserve.  “I think that will deter a lot of people from booking up weekends on a whim because they can afford to walk away from 30 bucks, but they might not walk away from $150.”

Mayor Darnelda Siegers said increasing the reservable space on ferries should wait until there’s more capacity on the route.

“With the current capacity we have, I’m not in favour of increasing the reservations. People here who need to travel at least can still get there early enough and get on at this point. If there are more reservations and we don't have the capacity, I don't know if we’d even be able to travel.”

People interested in attending the Nov. 25 online meeting can RSVP to get a link at bcferriesprojects.ca/aheadtogether.
BC Ferries said it expects to start implementing the final recommendations of the working group in early 2021.