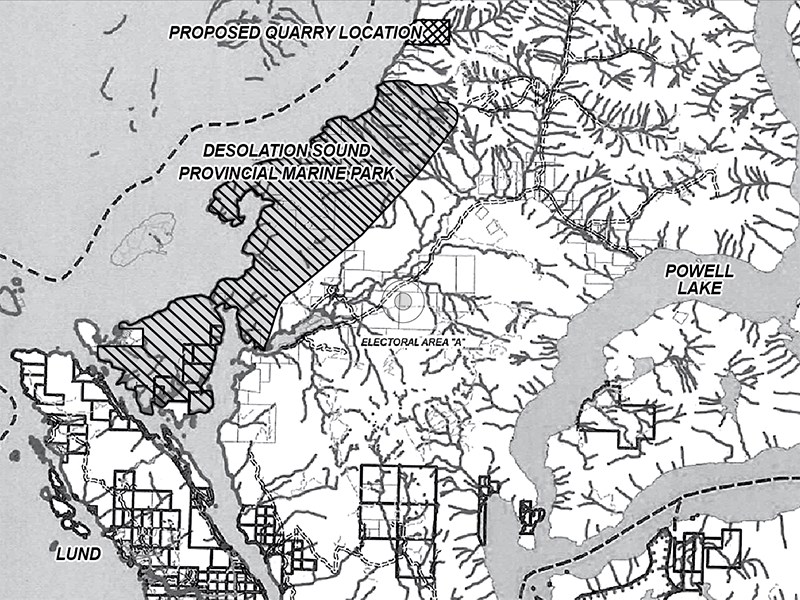 RISING TIDE: Despite reassurances that the province has only given an exploratory licence for a potential quarry development near Desolation Sound Provincial Marine Park, opposition to the project is growing. Peak image

Opposition to a proposed gravel quarry near Desolation Sound is growing.

“When you bring a large industrial operation into an area, you change it forever,” said Hollingsworth. “Desolation Sound is a unique area worth trying to preserve.”

According to a Monday, June 27, media release, Lehigh Hanson is conducting a “high-level investigation” for the development of a 1.2-square-kilometre quarry. As much as 70 million tons of gravel is estimated to be located near Lloyd Creek, about five kilometres northeast of the marine park boundary.

The forestry ministry confirmed in a June 15 letter to Save Desolation Sound that it has agreed to allow Lehigh’s investigative application, though the agreement had not yet been signed.

“The decision on this application, for the investigative phase, will not influence any decisions on further applications for any future operations,” stated Brian Kukulies, land officer for the province’s Sunshine Coast Natural Resource District, in the letter.

The exploratory work is expected to start after the Labour Day weekend and drilling will not be visible from the shoreline and noise not audible to park users, stated Kukulies.

“Lehigh Hanson is committed to performing these exploratory activities in a safe and environmentally responsible manner,” the company stated in a media release, “and will seek every opportunity to minimize disruption to the area.”

According to the release, the company does not currently have specific plans for a mining operation and understands that any decision will be contingent on local consultation, including involvement of first nations and community stakeholders.

But reassurances come as cold comfort to Hollingsworth, who is concerned that this approval opens the door to the project.

“You don’t spend that kind of money on investigation unless you’re pretty sure of what you’ve got underground,” said Hollingsworth.

According to Kukulies’ letter, ministry staff consider a number of factors when making a decision on an application, including policy, the application itself, referral responses from local government and first nations, and precedent.

Both Tla’amin Nation and Powell River Regional District gave conditional approval for the investigative licence, but said that if the project moves forward they want to have another chance to comment.

Hollingsworth said he is hoping that if word spreads the province will not allow the publicly-owned land to be spoiled.

“I don’t think people realize what a gem Desolation Sound is. I’m no activist, but I love the outdoors and nature,” said Hollingsworth.

Save Desolation Sound held a fundraiser event at the Royal Vancouver Yacht Club on Thursday, June 23. Canadian broadcaster and author Grant Lawrence spoke at the fundraiser and said he respects and understands the need for industry, but the company needs to re-think the project.

“I feel strongly that the Homfray Channel, next to our world-class oceanic jewel of Desolation Sound, is simply not an appropriate place for a gravel quarry,” said Lawrence.

Adam Vallance, owner of Powell River Sea Kayak, said his business and several others depend on the sound remaining unspoiled.

“The classic view is towards Mount Denman and the mountain range above Homfray Channel,” said Vallance. “The quarry would be located right in that viewscape. Barged gravel would have to travel right through Desolation Sound.”

Lehigh operates the Sechelt gravel pit and, according to the company, extracts about four million tons of aggregate annually from there and its Chilliwack quarry. The company is part of the conglomerate Lehigh Hanson Canada, owned by Germany’s Heidelberg Cement, the third largest cement maker in the world.