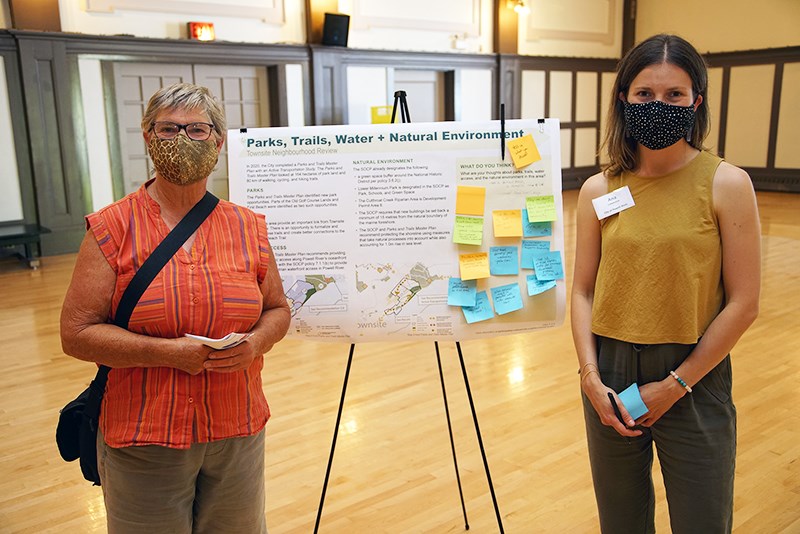 City of Powell River sponsored a Townsite neighbourhood review to receive input into how the city should plan for 230 acres of former industrial land and old golf course property that it now owns.

City staff posted a number of illustrated boards in Dwight Hall, where the review was held on July 20, to solicit input into various aspects of possible land use, such as: agriculture and resources; employment; parks, trails, water and natural environment; housing; and an overview of the area today. City senior planner Daniella Fergusson said the exercise will help guide the city’s official community plan for Townsite.

“The official community plan is a broad document in its nature so we are looking broadly,” said Fergusson. “It looks out 15 or 20 years into the future, so it’s not a detailed site plan or master planning process. We’re not going to be having a really detailed development map, for example, as a result of this process.

Fergusson said participants in the Townsite review were able to leave post-it notes on the boards and there were lots of diverse ideas expressed.

“I haven’t gone through every single sticky yet, but some of the big themes were how valued the trails and natural open spaces on those grounds are to people today,” added Fergusson. “They mentioned how important the connections are between Townsite and Westview. Some of those trails connect to the Willingdon Beach trail, so that was a big theme – the importance of securing and protecting those trails for the future.”

Another theme that came through strongly was a sense that heavy industry was not supported on these lands, but there are some different opinions about waterfront commercial or waterfront light industry, according to Fergusson.

“What people would like to see is a specific definition and explanation of what that actually means,” she said.

There were also a number of thoughts expressed about housing. Fergusson said viewpoints included everything from artist live-work spaces, to having some nice housing where the city can use proceeds from developing the housing to subsidize more affordable housing in other parts of the city. Another theme was having housing that fits into the heritage feel of Townsite that is financially accessible for anyone.

“There was a range of opinions there on what kind of housing and who it should be for,” said Fergusson.

This meeting was an initial step into the review of Townsite. Fergusson said all of the feedback will be collected and summarized and another meeting is scheduled where the city will dive into more details.

“I’ll be sharing where there was some consensus or agreement about where we could go with these city-owned lands in Townsite,” said Fergusson. “Where there are different ideas, and where we need more dialogue to figure out how to resolve different desires or visions for the future for Townsite, I’ve actually got Dwight Hall booked for October 13.”

For those wanting to provide input into the process, a page has been established on the city’s participatepr.ca website. Fergusson said there are three ways people can get involved. One is if they have a specific idea for a specific location, they can put a pin on the virtual map and share their idea. The second is if they have an idea that is more general, they can write and get their friends and neighbours to like it and comment on it. If people have any questions, there is a section on the site where people can pose them.

There is also a video on the website that provides a broad overview of the project.

Fergusson said she was pleased with the attendance at the event and said a big thanks needs to go to Townsite Ratepayers Society, which distributed flyers throughout the neighbourhood to encourage people to participate.