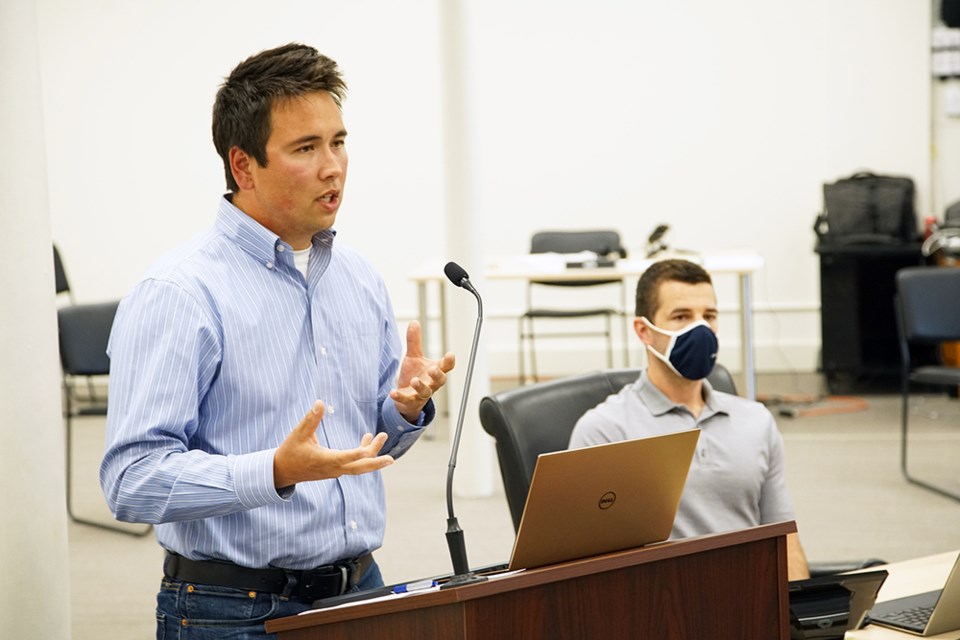 City of Powell River council will be reviewing expenditures of up to $581,519 from the COVID-19 safe restart reserve allocated by the province. At the May 27 finance committee meeting, chief financial officer Adam Langenmaier outlined a number of proposed expenditures.

Langenmaier said councillors had a list of projects that staff feel fit the criteria for what the COVID-19 reserve could be used for.

In the parks, recreation and culture department, a poolside flooring project for $12,000 was identified, and there was also flooring of the Powell River Recreation Complex Arbutus Room, valued at $60,000.

There was $40,000 proposed for the Townsite public realm project to conduct a study prior to a street lighting project, so a comprehensive plan can guide placement of streetlights.

In infrastructure and transportation, hiring of an additional engineering technologist is proposed, valued at $92,553 over 2021 and 2022. Additional Zunga Bus capacity has also been proposed, ranging from $26,154 for increased hours, to $78,058 for an additional bus, to $130,366 for both options.

In emergency services, $20,000 was budgeted for improvements to the fire hall in Wildwood.

Proposals for administration include an additional bylaw enforcement officer, valued at $19,600, and an additional records management assistant, for $37,000 and a bylaw review and update project, valued at $50,000.

According to a report from Langenmaier, as of May 27, there was $1,948,794 available in the COVID-19 safe restart reserve. If council approves all projects Langenmaier presented, remaining funds in the reserve would be $1,367,275, or 47 per cent of the original balance.

Councillor CaroleAnn Leishman said there had been a climate change mitigation and adaptation committee meeting and bike racks have been an issue looked into. She asked if a $10,000 expenditure can be added so more racks can be ordered.

“We’ve had really good uptake in engagement on the program and the sustainability planner said there were requests for probably 100 bike racks throughout the community,” said Leishman. “I think the operations department has been looking into purchasing some bike racks so if we were to add on another $10,000, we could get between 15 and 20 bike racks ordered and they could be installed in the community.”

Leishman made a motion to add $10,000 to the list for bike racks, which was carried.

Councillor Jim Palm said regarding Zunga Bus, he’d like more information. He said when proposed expenditures come to city council for a vote, he’d like to see some numbers on how well the bus is working.

“I’ve got nothing to go on at this point,” said Palm.

Sustainability planner Ana Lukyanova told councillors Zunga Bus operations were in the fourth month. She said the city has been happy with the technology used to coordinate the system and that the app is working smoothly. She said more than 600 people have installed the app on their phones and more than 100 have tried riding the bus, with more than 80 per cent being regular riders. She said after the ride, riders have the opportunity to leave feedback and 100 per cent are “thumbs-up.”

Doubt also had concerns about reserve funds being used for additional staff members.

“I have real concerns about using one-time grant money to create full-time employment positions because those positions tend to continue over time,” said Doubt. “While they would be paid for with one-time funding this year and perhaps next year, after that, the taxpayer is going to have to pick up the cost of those positions. Once we hire staff, they tend to become permanent because we don’t hire people we don’t need.”

Councillor Cindy Elliott said she didn’t have any problem with the items on the list in principle, but that many of the projects should have reports brought to council so they can be discussed.

“I don’t think we’re ready to blanket-approve everything on the list without having more information about many of these projects,” said Elliott. “The hiring of people with grant money would have to be temporary term positions, not long term, because we don’t want to create long term positions with a grant. I think it was suggested that we would be hiring temporary people.”

Councillor Maggie Hathaway said with the three administration requests for staff, the bylaw control officer might be permanent but the other two appear to be project-oriented.

Doubt said he was looking for unanimous consent to move the expenditure of COVID-19 reserve funds to the next city council meeting on June 3. He said if council wanted more information, the items could be referred back to city staff for more detailed reports. Council gave its assent to consider the issue at the June 3 meeting.