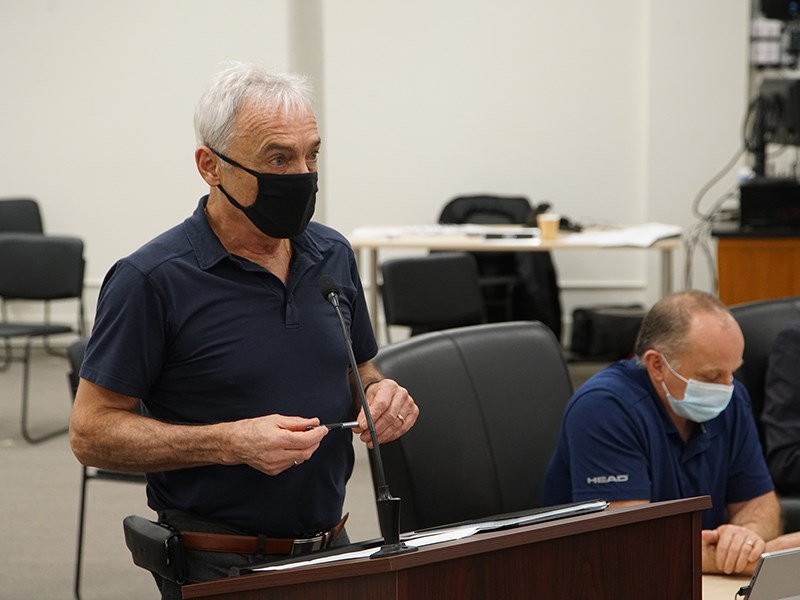 ORGANIC OPTION: City director of infrastructure Tor Birtig recently outlined a proposed city-wide organics program to the committee of the whole. The city is applying for a grant to fund two thirds of the cost of purchasing carts that would be used specifically for compostable material picked up by an automated truck. Paul Galinski photo

City of Powell River Council has voted to commit $173,250 toward an organics curbside collection grant application. If the grant is successful, the city’s share would come out of its surplus – general capital fund and be used to purchase organics carts for local households.

At the January 21 city council meeting, council voted unanimously to direct staff to submit an application for grant funding for the organics curbside collection project through the CleanBC organic infrastructure and collection program.

Councillor CaroleAnn Leishman said it would be great if the city is successful with this grant. She said as part of the regional solid waste management plan, the imperative is to divert as many different materials from what becomes landfill in Washington State, being transported more than 770 kilometres one way from Powell River.

Leishman said a survey the city conducted into the waste stream had more than 1,200 responses and 95 per cent answered that they wanted to have an organics program, collecting kitchen and yard waste.

“It’s good news and we are heading in the right direction,” said Leishman. “I fully support applying for this grant.”

Mayor Dave Formosa asked Leishman to speak regarding monetary savings that could occur if a curbside collection program is instituted.

Leishman said the dollar numbers are not yet available for what it would cost to process organics locally.

She said the tipping fee for solid waste is $235 per tonne, and it increases $5 every year. She said part of the reason for pulling organic waste out of the solid waste stream is because it is usable material and it’s very wet and heavy.

“It’s a huge volume of water and weight to the garbage,” said Leishman.

She said if there is a local facility to process organic material, it could be at less cost than the amount to send solid waste to Washington State. With the current organics pilot project, collected materials are sent to Sechelt. There is a cost to transport it and for the depot to process it. It’s then turned into a fantastic fertilizer, said Leishman.

“The idea is to get a facility similar to that in Powell River,” she said. “It would cut out all of the shipping fees and all of that waste that can be turned into an organic product here instead of being sent to Washington and dumped in a big hole.”

Councillor Cindy Elliott said municipalities in BC are moving toward zero waste and taking organics out of the garbage.

“With this, we get a $346,550 grant to help us with those expenses,” said Elliott. “It makes good sense to have 66 per cent of our cost covered through this grant.”

Councillor George Doubt said he was recently on a webinar about composting and some of the alternatives. He said one of the figures mentioned was a tipping fee from a transfer station to a composting facility being somewhere in the neighbourhood of $120 per tonne, which is considerably less than the tipping fee the city is paying right now for solid waste.

“I expect there will be some cost savings,” said Doubt.

He said there is also the greenhouse gas component, with not as much waste being shipped to Washington.

“It’s going to provide an economic benefit and an environmental benefit,” said Doubt.

At the January 19 committee of the whole meeting, director of infrastructure Tor Birtig outlined a potential organics program for the city. Birtig said the CleanBC grant program has been designed to reduce greenhouse gas emissions by increasing the amount of organic waste that gets diverted from landfills.

Birtig said the city wants to get into a program servicing all residents, not just a pilot program serving 300 to 400 residences.

Birtig said carts that need to be purchased would be used for kitchen and yard waste. He said the city would need to purchase 6,300 carts at a cost of approximately $80 each. Also required would be a third automated waste truck to handle the volume of waste, which includes solid waste, recycling and organics. Cost of the vehicle would be about $400,000.

Formosa asked if the total cost of the city-wide organics program was $919,000, of which the city would have to fund $573,000, and if the pilot project would be over. Birtig said that was the case.