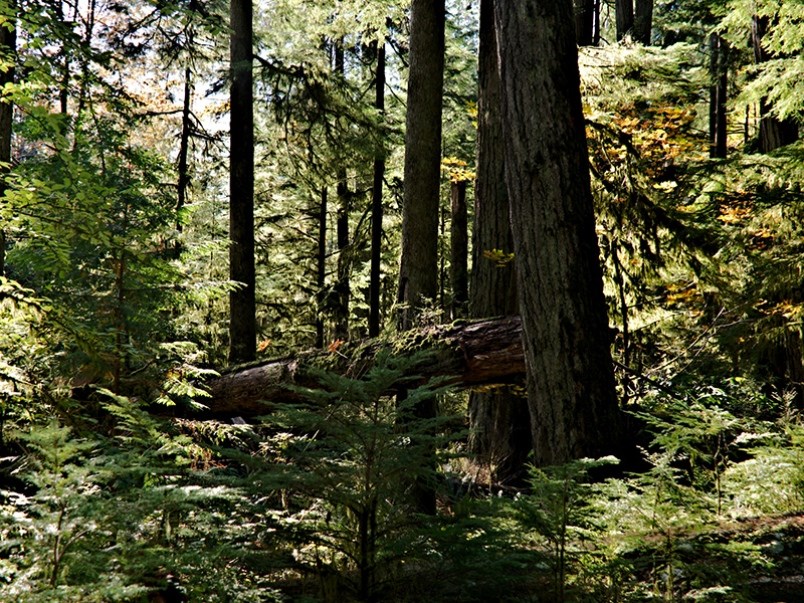 Western Forest Products has enlightened qathet Regional District (qRD) and City of Powell River about old forests in the region.

Representatives from the company spoke as delegations to both local governments at their respective committee of the whole meetings in January.

At the January 14 qRD committee of the whole meeting, Western Forest Products (WFP) director of forest inventory and stewardship Stuart Glen told the committee that anytime there is discussion about forestry, it’s always good to understand the broader context.

In his presentation, he said he was providing ministry of forests data representing the total BC coastal area. He said the timber harvesting land base is 25 per cent of the forest. The protected and non-harvestable portion is 75 per cent, according to Glen. He said the forest industry is supported by the 25 per cent.

Glen said on the BC coast there is 4.6 million hectares of old growth, classified as greater than 250 years.

He said if a forecast is made for 250 years for the coastal forest, there will be a significant increase in old growth, amounting to 8.1 million hectares of old growth, equivalent to 2.6 Vancouver Islands.

In terms of the Powell River area, John Deal, manager of forest stewardship and wildlife, said he wanted to give some insight into how WFP manages for wildlife and biodiversity, as well as old growth. He said within the Stillwater operation, there has been a long history of fire as well as a long harvest history.

Deal said he wanted to highlight Inland Lake Park, which was established in 2000, and it used to be part of TFL 39 block one. The total area of the park is just under 2,800 hectares and includes the lake, but the primary role of that park is the protection of significant areas of Georgia lowlands.

“The important thing to talk about today is it was also identified to have a primary role to represent some of this low elevation dry forest,” said Deal.

He said WFP has a science-based approach to managing wildlife and old growth. He said this approach is designed for coastal forests. The whole purpose is to have functioning ecosystems for the future, according to Deal.

“There is a big focus on the old, mature forest and the structure of the forest,” said Deal. He added that some of the research is based on 20 years of research, including Stillwater division.

There are three main scales by which the program is developed, said Deal. The first is conserving the full range of ecosystems and geared to species they don’t know very much about. In addition, it is focusing on the rare ecosystems, added Deal.

He said at the second scale, WFP brings in habitat retention. He said in terms of maintaining big trees, there has been a standard in place since 2016 for protecting big trees.

He said at the finest scale, there are animal species at risk, there are species of significant concern and common species to be considered.

Deal said stable communities require healthy and resilient forests into the future, and this includes growing forests adapted to the future climate. He said the wood products themselves are recognized as being a key global climate change solution.

“It’s better for all of BC,” said Deal. “The forests are dynamic and are directly influenced by that changing climate.”

Glen said that the term “forest dependent communities” is bandied about but forest fortunate communities may be more accurate terminology.

“Not everyone has a forest aligned with their community,” said Glen. “The trees never stop growing. We do long-term planning, looking 250 years into the future. Our forests were there for the generations before mine, our generation now, and I can say with confidence, having worked at Stillwater, the forests are absolutely going to be there for the next generations.

“Coastal BC has the complete forestry life cycle and WFP itself has a seed orchard to secure the seed supply, and the seed supply adapted to the climate of the future,” said Glen.

He said in terms of global leadership, 83 per cent of BC is sustainable forest management (SFM) certified.

“The world needs wood,” said Glen. “Wood is the absolute best building material we have. Where better to get it than from SFM certified forests? I really feel we can be a beacon. Other parts of the world are not doing what we are doing. Where better for the world, the global climate change solution, than for us to be leaders in BC.

“We are forest fortunate communities and are absolutely blessed to have them and to be looking after them,” said Glen. “We have absolutely wonderful forests at Stillwater that we can be proud of. Conservation and stewardship really is the context of what we do.”