Festival draws artists together for a common purpose
Jun 25, 2012 9:00 PM By: Janet Southcott 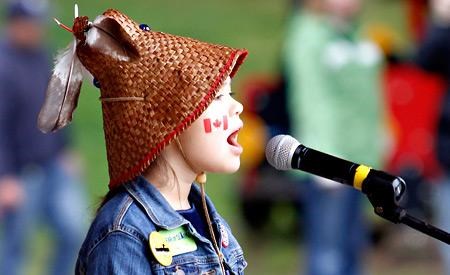 Ta’Kaiya Blaney, at 11 years old, has already accomplished more travel and appeared on more stages than many people ever will in a lifetime. Where one person may shy from public speaking, Ta’Kaiya has spoken to arenas of thousands, spreading her message of environmental awareness.

A singer, actor, songwriter and teacher, Ta’Kaiya is one of four soloists performing at International Choral Kathaumixw. Tickets are currently on sale for this year’s event, when local, national and international artists converge on Powell River to sing July 3 through 7.

Anyone who has been to previous Kathaumixw festivals will remember at least one of the choirs performing for sold-out audiences. This year, however, it may be a pre-teen soloist who floods the audiences with an experience to remember.

On the festival’s website the four soloists—Ta’Kaiya; Gunnel Sjöberg, soprano from Sweden; Chad Louwerse, Canadian baritone; and Megan Skidmore, Canadian soprano from Powell River—are described. Bios speak of previous accomplishments, appearances in multiple well-known operas or with orchestras across the world. For Ta’Kaiya, her resumé already speaks of an understanding of a different force of music, that of conveying truth, originality, and speaking and singing from the heart.

Soloists are picked for the requirements of the music, said Don James, artistic director for the festival. A look at the festival’s concerts shows how each soloist is involved with major works, such as Louwerse and Skidmore performing with the Kathaumixw Festival Chorus and Symphony Orchestra Academy of the Pacific with Antonin Dvorak’s Te Deum at the Gala Opening Concert on Tuesday, July 3.

For Ta’Kaiya, she too was chosen through the music. She was invited to perform at Kathaumixw through a suggestion made by Tobin Stokes, explained James. Stokes, a British Columbia composer who grew up in Powell River, has been commissioned to write two pieces of music for the festival, including a piece for the mass children’s choir where 400 children sing together.

“In writing for the large children’s choir he wanted to do it on a theme of the environment and conservation,” said James. “So he chose text and thought it appropriate to have Ta’Kaiya involved in this composition. Then we have extended this further and she will do the solo in the opening anthem. She will be here all week and take part with the kids.”

The anthem James mentions is the Kathaumixw Anthem, another original creation from Stokes.

“Ta’Kaiya came to my attention a couple of years ago,” explained Stokes. “I saw somewhere that she was singing so I looked her up on the Internet and I heard her sing on a YouTube video. This was just after the last Kathaumixw and I put it into the back of my mind that it would be interesting [to have Ta’Kaiya participate in] Kathaumixw since she is Sliammon and she is singing. She has quite an agenda, but she is singing about nature. She wants to save the west coast. It is really her passion.” Stokes was then at a conference his wife was attending. Ta’Kaiya sang to close the conference and Stokes approached her and her mother about Kathaumixw.

In December, 2011, Stokes told James about Ta’Kaiya and with his support began writing and composing what would become Blue Green Water. “I have tried to write her something that covers her passion and that can also introduce visiting Kathaumixw choirs through the words to some ideas that are about west coast and about nature,” said Stokes. “So I tried to give her a little bit about what she is passionate about yet craft a song that really works for all the children everywhere.”

Ta’Kaiya lives in North Vancouver and is a member of the Tla’amin (Sliammon) First Nation. She is home-schooled and will be entering into grade six this fall. Undoubtedly, the flexibility of home-schooling plays a large part in development of her passion and ability to attend festivals, marches, events and schools across the world. Her parents, Anne and Del Blaney, are very supportive and travel with her. This is the first time the Blaneys will experience Kathaumixw.

“It is a beautiful song,” said Ta’Kaiya about Blue Green Water. “I really enjoy it and can’t wait to sing it.” She recently returned from the Yinka Dene Alliance Freedom Train across Canada alerting people about the Enbridge Northern Gateway pipeline, a proposal to build a double pipeline carrying bitumen and crude oil from the Alberta tar sands to Kitimat, and “how it will damage our territories,” she said.

Together with her music instructor, Aileen de la Cruz, Ta’Kaiya began writing Shallow Waters, a song about the pipeline and the effect an oil spill would have on the area. During the writing of the song the BP Gulf oil spill happened. “It was a really appropriate time to come out with that song,” she said. “You see the damaging effects it does to the ecosystem and nearby fishing communities and just to be reminded that it could happen in this beautiful coast of BC is scary.”

This week, Ta’Kaiya travelled to Rio de Janeiro as part of 20 We Canada champions attending the United Nations Earth Summit. “I will be bringing the topic of the pipeline and the rights of indigenous people and how the youth and children are speaking out about the development of our land that could ruin the future,” she said, when interviewed prior to the event. The summit, which marks 20 years since the first earth summit in 1992, and lasts for three days, has been a gathering of world leaders who “talk about the consequence of our greed and the earth,” she said.

People are listening to Ta’Kaiya. When asked what she would like people to hear when she sings, speaks, acts or teaches, she answered, “That we can’t keep putting pipelines in our land and putting oil rigs in the ocean, clear-cutting forests, mining the mountains, because what is that going to do to the future and many generations to come? We can’t canoe in an ocean of oil, drink contaminated waters, swim in a polluted river, gather clams from a beach that is poisoned. We just can’t. If we keep destroying this earth the future generations won’t be able to do the most simple things we do today like climb a tree or run into a forest and play in there because there won’t be any more forests and trees.”

The second creation by Stokes to be premiered at Kathaumixw is Dona Nobis Pacem. This common Latin mass text, that means grant us peace, has been given a “flower-power, Dave Brubeck kind of style,” he said. The piece will be sung by the 1,000 voice mass choir at the Gala Closing concert and will be conducted by Fred Sjöberg. Stokes had approached Sjöberg to ask what he would like for this year’s festival and received the reply he wanted something about world peace. “I know Fred likes these barn-burning big pieces that just sort of say it all. They wrap up Kathaumixw and have to be fun, fun, fun.”

He wanted to write something in 5/8 time, which he had not attempted before, and developed a piece that he describes as being kitchy, over the top and slightly corny. “The lyrics are all about if you plant a flower it will grow. It is just a big analogy on how seeds can spread and how peace can spread around the world.”

For Stokes, his passion is to have the world singing together either at a community level or very advanced level. Through this he sees the benefit as being world peace.

“It doesn’t matter how old you are, if you are a child or an adult or an elder or youth, you can make a difference,” said Ta’Kaiya. “I know there are a lot of people that don’t believe they can make a difference. What I say to that is that everyone has been gifted with some sort of gift. I have singing and that is how I spread the message. They should share it. Everyone has a voice to be heard.”