New technology will save money at Powell River Recreation Complex 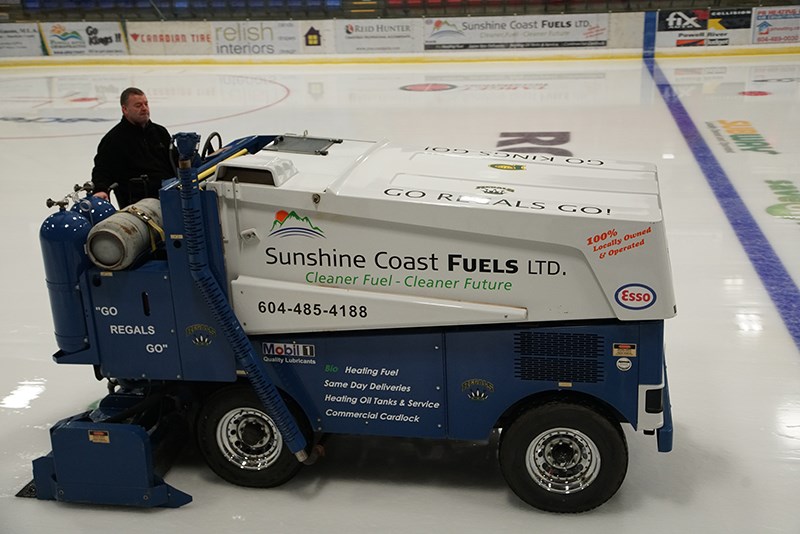 COOL TECHNOLOGY: Powell River Recreation Complex is benefitting from new systems that will help offset energy costs and cut down on greenhouse gas emissions, such as with the Zamboni ice-clearing vehicle. Paul Galinski photo

In July 2019, the city installed new insulated ceilings in Hap Parker Arena and the rink next door, and a more energy efficient ice-making system paid for through rebate programs and Powell River Community Forest funding.

“For the complex, it’s a greater impact in terms of overall operating savings,” said city manager of recreation Neil Pukesh. “Research says our annual refrigeration costs should be reduced by 14 to 20 per cent.”

Pukesh said recreation complex staff members have noticed the much cooler environment created with the insulated ceilings has helped tremendously with ice making.

The ceiling will keep the two rinks cooler in the summer months for building ice and provide for a much more consistent temperature during the rest of the year.

“The new ceilings will help regulate the temperatures in the arena and rink,” said city councillor CaroleAnn Leishman, who chairs the city’s sustainability committee. “Events being held in the warmer months, like International Choral Kathaumixw Festival in July, were always sweltering hot due to poor insulation.”

People will also notice a nicer ceiling aesthetic, a brighter arena and better acoustics, according to Pukesh.

The city received an $18,000 rebate from BC Hydro for the ceiling installations.

To add further savings, the recreation complex has switched over to a REALice water treatment system that allows for colder water to be used for resurfacing the ice. The previous technology required hot water and a significant amount of natural gas for water used in the ice-clearing machinery.

Staff members have been impressed with the new ice that was recently put in, according to Pukesh.

“It’s probably the nicest and cleanest looking sheet of ice that I’ve ever seen installed,” he said.

“Hockey players should see a faster sheet of ice and less snow buildup as a result,” said Pukesh. “That’s the feedback we’ve received from other facilities, that it does provide a faster ice surface.”

Approximately 100 arenas in North America are using REALice, including Rogers Arena, home of the NHL Vancouver Canucks. The city will receive a $20,000 rebate from FortisBC for this installation and save $16,000 annually in utility costs for the complex.