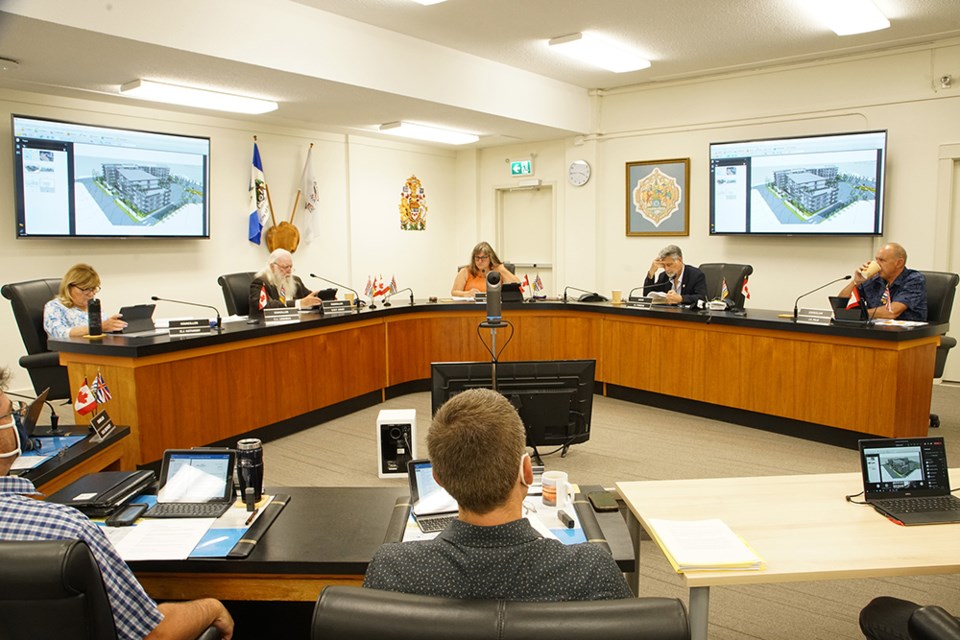 NEW UNITS: An apartment complex development for Joyce Avenue was considered at the City of Powell River committee of the whole meeting and councillors had concerns over conditions for 10 units that would be deemed as more affordable. Paul Galinski photo

City of Powell River councillors expressed disappointment with affordable housing components attached to a rental housing complex to which they are considering giving zoning and sustainable official community plan amendments.

At the June 1 committee of the whole meeting, director of planning services Jason Gow outlined the proposal from Veyron Properties Group. According to a report from Gow to councillors, Veyron has made an offer on a vacant property on Edgehill Crescent, across from Coastal Breeze, conditional on a successful rezoning and sustainable official community plan amendment. Veyron is looking to build a high-density multifamily residential rental development on the site.

One of the components of the application is a housing agreement principles letter, which is associated with an offer by the applicant to provide 10 units at a more affordable rate for a period of 10 years.

“The applicant is offering 10 microunits at a more affordable rental rate than would be typically found in our region for new units like these,” said Gow. “The microunits are just over 300 square feet. Rent for these units will be determined by using the BC Housing guideline that establishes average household income for designated unit types in Powell River.

“Based on the guidelines, the rent for these units would be just over $900 per month.”

Gow said whether this meets the city’s definition for affordable housing is unclear. He said he wanted to point out that this is a voluntary offer.

Gow also highlighted measures that outline sustainability initiatives that will be included into the project. He said the city guideline is for the building to be constructed and to conform with step two of the BC step code for building, or step one with a low carbon energy system. He said the complex will have bike centres and electrical charging stations to encourage reducing transportation carbon emissions.

Gow outlined early community consultation, where notices were sent out to property owners within 200 metres of the subject property and three pieces of correspondence were received. The letters outlined concerns about the scale of the development.

“It’s not surprising that some feel Powell River is not ready for a development of this scale,” said Gow. “It’s worth noting that the correspondence received was from outside of the mailout area.”

Gow said staff is recommending that second reading be given to amendment bylaws and that staff be directed to schedule a public hearing.

Mayor Dave Formosa said the proposal is for a six-story structure and he asked if the bylaws allowed four storeys.

Gow said the zone limitation was by height, not a number of storeys. He said 19.5 metres is the maximum height.

Formosa said the proposal also offered 10 reduced rents, and not going by the affordable housing standard, assessing the rents at a dollar amount rather than as a percentage of wages. He asked if the city was getting a big enough bang for the buck. Gow reiterated that it was not a requirement of the zoning. Formosa said he was hoping to see more than 10 units, and the units being more affordable than the $900 a month rental rate.

Councillor Maggie Hathaway said she goes along with the mayor’s thoughts.

“The thing that concerns me is the limitation of the 10-year period,” said Hathaway. “I’m somewhat concerned that after 10 years people could not live there anymore. I thought our original plan was forever that there would be affordable units.”

Councillor Rob Southcott said he is disappointed about the 10-year limit of the coupling of 10 units to being more affordable. He said in 10 years the proponents could decouple the rent from the affordability.

Councillor Jim Palm said overall, he welcomes the development to the community and it’s a step forward in terms of providing rental housing. He said, however, he is a little perplexed by the 10 units. He said he would like to see some wording that protects long-term renters who are living on a fixed income. He said he’d like to see a renewal clause for them.

Gow said in his discussions with the proponents, he came to a place where they were not willing to move beyond the 10 years.

The committee gave consent to send the matter to city council, which included second reading of the sustainable official community plan bylaw, the zoning bylaw and that these matters be sent to public hearing. There is a long list of conditions that council will also consider.