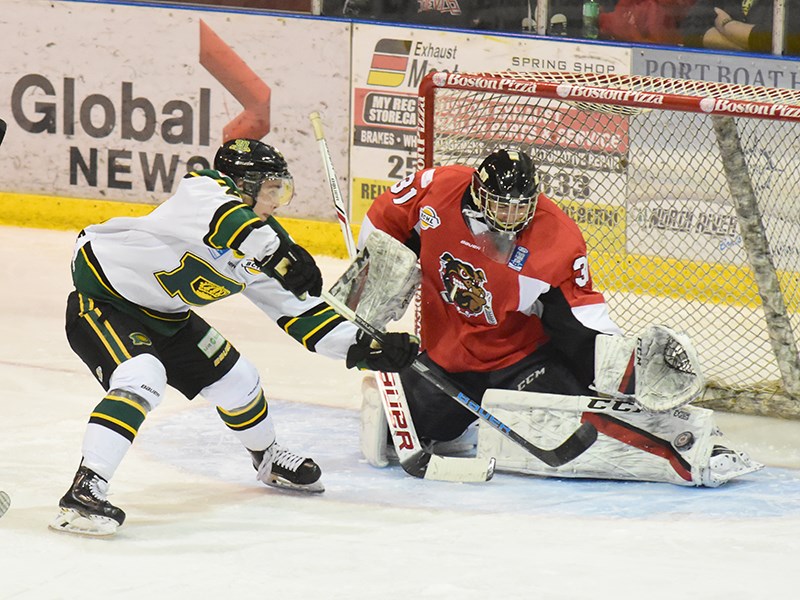 POINT BLANK: Powell River Kings forward Nick Abbott charges toward Alberni Valley Bulldogs’ goaltender for a scoring chance during his team’s 5-4 loss on February 25, the third defeat in a row for the BC Hockey League club. Trent Rolfe photo

It was a simple equation for Powell River Kings to clinch home-ice advantage. The BC Hockey League club needed to earn five of a possible six points from three games last weekend to claim its first division title since 2012.

However, frustrations and stumbles led to the Kings dropping out of the race for a top-two spot in the Island Division and home-ice advantage in the postseason.

On February 23, Powell River travelled to Duncan to face Cowichan Valley Capitals, a team at the bottom of the BCHL standings.

Capitals jumped out to a 2-0 lead with pair of first period power play goals and Kings were unable to respond until the third period when Neal Samanski tipped home an Andy Stevens point shot. Capitals regained their two-goal lead, and then Carter Turnbull scored late to pull the visitors to within one. Kings were unable to find an equalizer and fell to the Capitals for the third time this season, this time by a score of 3-2.

“The first two periods, Cowichan did a good job keeping us to the outside, keeping our chances limited,” said Kings forward Ben Thomas, “and I don’t think our compete level was as high as it should have been. The third period we came on well with a strong push, but just not enough time left.”

By dropping points on Friday, Kings needed help to clinch first place, but still had home-ice advantage firmly in their own control when they visited Alberni Valley to open up a season-closing double header. Similar to the previous night, Kings fell behind 2-0 through 40 minutes before getting on the board in a frantic third period.

Turnbull started the comeback with a third-period goal. Ethan Kimball and Samanski also scored to answer Alberni’s third goal and tie the game at three. However, a late goal for the Bulldogs, paired with an empty-net goal, earned the home team a 5-4 win. Turnbull scored again late in the game, but Kings fell short by one goal for the second straight game.

“It wasn’t a 60-minute effort by our group,” said Kings interim head coach Brock Sawyer. “We proved to ourselves that we can’t wait until the third period; if we start like that we put a team on their heels and we get after it right from the drop of the puck.”

With the back-to-back losses, Powell River officially dropped out of the race for home-ice advantage in the playoffs and settled for a third place finish. Their opponent, however, would not be decided until Sunday afternoon.

Kings completed the regular season with one more game against the Bulldogs on February 25.

An early Port Alberni goal was cancelled out quickly by Nick Abbott’s second of the BCHL season to tie the score 1-1 score after 20 minutes. Turnbull became the fifth player in the BCHL this season to score 30 goals by tallying on the power play in the second period, but the Kings were unable to muster more offence. Three unanswered Alberni goals in the third period saw the Bulldogs run away with the game and win 4-2.

“Our zone play was better today, guys were recognizing Alberni’s chances; it’s just little mistakes that are costing us right now,” said Kings assistant coach Kyle Bodie. “It’s frustrating, for sure. Game 58 you need to make sure your leaders lead; there are no more rookies this time of year and it doesn’t matter who you play you need to keep going and focus on your next shift.”

Powell River will face Nanaimo in the first round of the BCHL playoffs. The teams split the season series with four wins apiece in the, with Powell River winning three games in Nanaimo.

The series begins in Nanaimo on Friday, March 2, with game two taking place on Saturday, March 3. The series moves to Powell River on Monday, March 5, and Tuesday March 6. Both home games start at 7 pm at Hap Parker Arena.

On February 18, Kings handed out their year-end awards at a banquet held at Hap Parker Arena. Carter Turnbull was named the team’s most valuable player, while Ethan Kimball was named rookie of the year. Andy Stevens and Carmine Buono shared the top defender award and captain Gavin Rauser was named most sportsmanlike player. A full list of award winners is available at powellriverkings.com.