Coach and players covet promotion to higher division
Jan 10, 2018 8:00 AM By: David Brindle 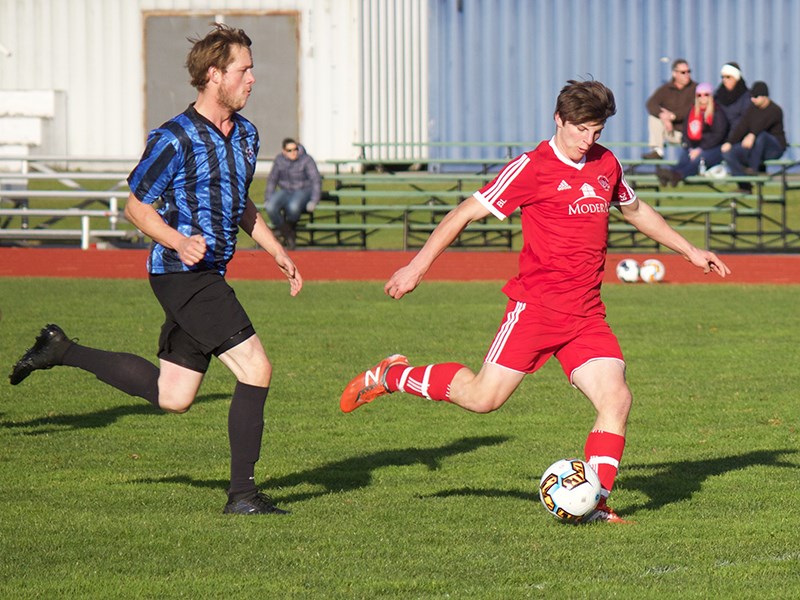 YOUNG TALENT: Powell River Villa striker Chris Marshman [right] is one of the soccer team’s young guns who will have to come up big in order for the club to win its division. David Brindle photo

Four games remain in Powell River Villa soccer club’s Vancouver Island Soccer League season and it is still mathematically possible for the team to finish first in Division 3A and move up to Division 2 for next year.

Villa is currently in third place with 31 points, five points behind Victoria’s Gorge and Bays United. Villa has one game in hand on both teams and two of the club’s remaining four games are against the division leaders.

“Our chances are good,” said Villa head coach Chris McDonough. “We have the ability to do it. We're going to try to win these next four games and get promoted. That's our goal.”

It will not be easy. Villa’s two losses prior to the holiday break were to Gorge, both by scores of 1-0. The team’s two games against Bays United resulted in 2-0 and 4-0 wins.

Villa has the ability to score. The team has netted 42 goals, second only to Gorge, and have the leagues second highest scorer in Jake Kenmuir, who has 11 points. The club will miss midfielder Julius Ulrich, who scored seven goals before returning home to Germany.

McDonough said his team was beat up and a lot of his players were playing injured before the holiday break, including veteran Kye Taylor, who can be a game-breaker.

“With getting all of our personnel healthy and ready to go, we have a really good chance, said McDonough.

Villa is scheduled to play a home game at 1:30 pm on Sunday, January 14, at Timberlane Park against Prospect Lake.

Villa then plays Bays United in Victoria on January 20, returns home to face Gorge on January 28 and closes out the season in Victoria against fourth-place Vic West Beavers on February 3.

“It's extremely difficult to win a league and you can't falter much in a season,” said McDonough.

With a season record of 10 wins, two losses and one tie, Villa has shown it has the potential to regain a spot in Division 2.