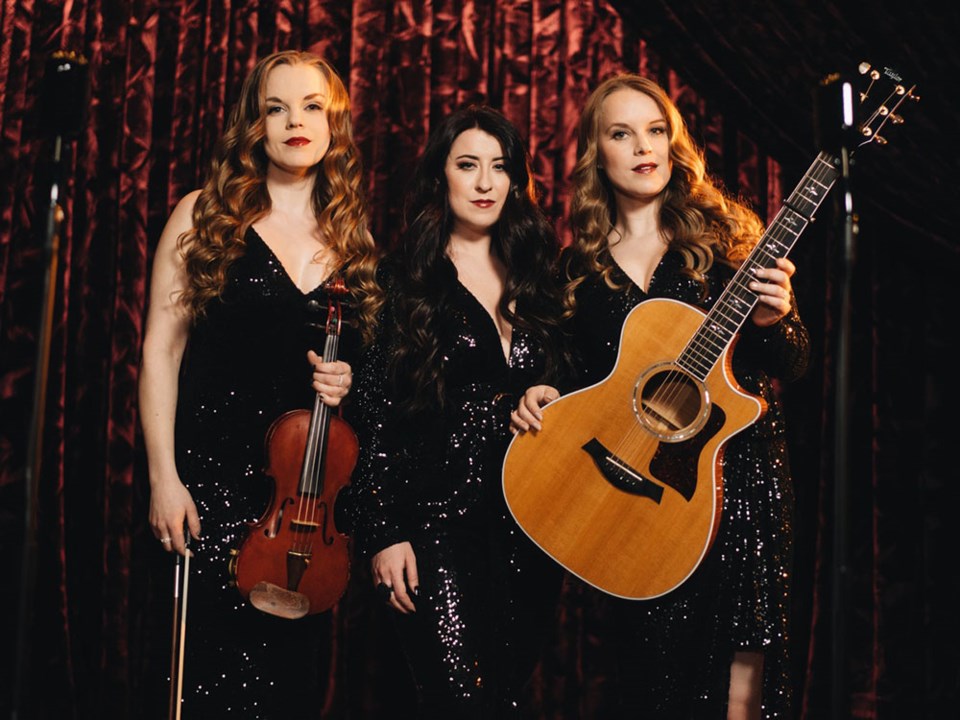 TALENTED TEAM: Sisters Julie [left] and Carli Kennedy [right], also known as Twin Kennedy, have teamed up with fellow Canadian country artist Mallory Johnson [centre] for a song that will appear on new albums from both artists. Twin Kennedy hopes to return to their hometown of Powell River for a performance in the near future, when pandemic restrictions have been eased or are no longer necessary.Contributed photo

“Being Canadian, all of us have our little Canadian club in Nashville. Mallory came down for a writing trip and we had a mutual friend from Ontario who said, ‘You’ve got to meet my friend Mallory,’ and connected us to write,” said Julie. “We all just immediately clicked and loved working together musically but then became fast friends. Now we hang out both for fun and for music.”

Johnson, who is originally from Newfoundland and Labrador, said the trio writes together a lot, and “Wise Woman” is one of the songs as artists they wanted to record, so it made the most sense to collaborate.

“Because of the message of the song we [thought] we would do the song more justice by making it a collaboration,” explained Johnson. “We have so many other songs. On my new record there are at least two or three more I wrote with these girls. We just have this beautiful, dynamic working relationship, so it’s been special to do this whole project with them for sure.”

“Wise Woman” is a song the three collaborators were keen to share with the world, according to Carli.

“We all loved it so much because the message is about lifting each other up as women and being there for each other,” said Carli. “It makes perfect sense to do as a duet and bring together east coast and west coast and all of our experiences and messages. It’s been such an amazing ride even so far, it’s only been a few weeks since the song has been out and we’re blown away by the response.”

Johnson added that the process was therapeutic for all three of them.

“I showed up at Julie and Carli’s one night with a bottle of wine; it was a girls' night and an evening writing session,” said Johnson. “It was one of those things where we are such close friends there wasn’t really any pressure to write a song that night. If we wrote a song, awesome, if we didn’t it was still going to be a great time.”

That night, Carli had a song idea she thought they should try, picked up her guitar and told them the title.

“I immediately got goosebumps; I had shivers down my spine,” said Johnson. “I had no idea the direction she was going to take with this, just the title alone held so much power.”

Carli started to sing the first verse of this song, which hasn’t changed much from what listeners hear now.

“We were sharing our stories, the challenges and the insecurities but also the amazing things about being a woman in the country music industry, which is very male dominated,” said Johnson. “The song just kind of flowed out; the lines just kind of wrote themselves, it was really special.

“These types of sessions don’t come by very often. You only hear the good songs and stories because that’s what we want to share with you. For every one good song there are 15 or 20 that no one is ever going to hear,” joked Johnson. “This was a really special one. I feel lucky that I was in the same room with these two ladies and they wanted me in on this song, because it’s the most important song I’ve ever been a part of.”

New albums in the making

Mallory is busy in the studio writing and recording her latest album, while Twin Kennedy will be releasing their next album later this year.

“‘Wise Woman’ is on that album; it was supposed to come out right when the pandemic started and we had a whole show planned in Powell River, so we had to press pause and we are basically holding our breath until the second we can come home and do the show,” said Carli. “We know there are some people who still have tickets and they’re saying, ‘No, we’re going to keep our tickets until you can do a new show,’ which is the sweetest thing ever.”

“When we wrote it, it was about how we’re always homebound in our hearts no matter how far we are away from family; it was written during a long tour where we hadn’t been home in forever,” she added. “But now Homebound has a totally new meaning and now we all have been homebound. It’s actually kind of fitting it’s going to come out hopefully at the end of the pandemic, then we cannot wait until we are homebound to do a show in Powell River.”

Julie and Carli have been writing and performing together since they were six years old. Carli joked that there are still old family videos of the two of them performing at a music festival in Powell River.

“That’s the amazing thing about growing up in Powell River, they give you a stage to perform when you’re just learning to songwrite and it gave us this love of performing,” said Julie.

The video for “Wise Woman” was recently released. Filmed over a couple of months in mid-February, it features dozens of inspiring women including Carli and Julie’s younger sister and new baby, their mom and closest childhood friend who now lives in Victoria.

“We thought why not create the most complex project ever in the middle of a pandemic,” joked Carli. “It was a dream project and to see it come together and be out in the world is surreal.”

Mallory’s brother directed and produced the video. Dave Wallace from Riptide Studios in BC and Jay Curtis Miller and Tim Sutherland in Nashville were all part of the project.

“For me, music videos are about everyone else who has created that project with me and I like to include as many local or family and friends in the project because it’s my time to really show appreciation to the people who have supported me,” said Johnson. “My brother is one of those important people so whenever I can have his hands on something I let him have that creativity, that kind of control, and he did not disappoint on this project. It was such a passion project; we had so many amazing women.”

On March 26, a free online concert called Wise Woman - The Show, presented by the Consulate General of Canada to the Southeast United States, will be hosted by Twin Kennedy and Johnson. The virtual concert will feature some of Canada’s best female artists based in Nashville.

“It’s really cool to have that support system, especially when you’re far away from home because we all get homesick and you miss your family and friends, so it’s really special to have a tight-knit unit here in Nashville and I’ve definitely found that with Julie and Carli,” said Johnson.

Until people are able to gather again for live music, the musicians plan to continue making music and coming up with new and exciting ideas to keep their fans entertained.

“Every night we’re together we dream up all the things we’d loved to see happen for the project; the message of the song is so much bigger than just ourselves or just two artists,” said Carli, adding that they wanted to be able to celebrate as many women as they could, not just through the music video but with other Canadian female artists.

Wise Woman - The Show takes place at 4 pm on March 26. To watch, go to  youtube.com/twinkennedy or the following Facebook link: https://fb.watch/4jp-s3Fadm/. Signup for the VIP list at VIP list signup: eepurl.com/hsnBwD.

“We wanted to bring Mallory back to Powell River and do a Wise Woman show,” said Julie, “and this is the closest thing we can do right now.”

To view the “Wise Woman” music video on YouTube, go to youtu.be/wnPAMdxvxPM. For more information about Twin Kennedy, go to twinkennedy.com. Mallory Johnson’s website is malloryjohnsonmusic.com.

Twin Kennedy to return to Powell River next year for album release party
Nov 18, 2019 7:00 AM
Comments