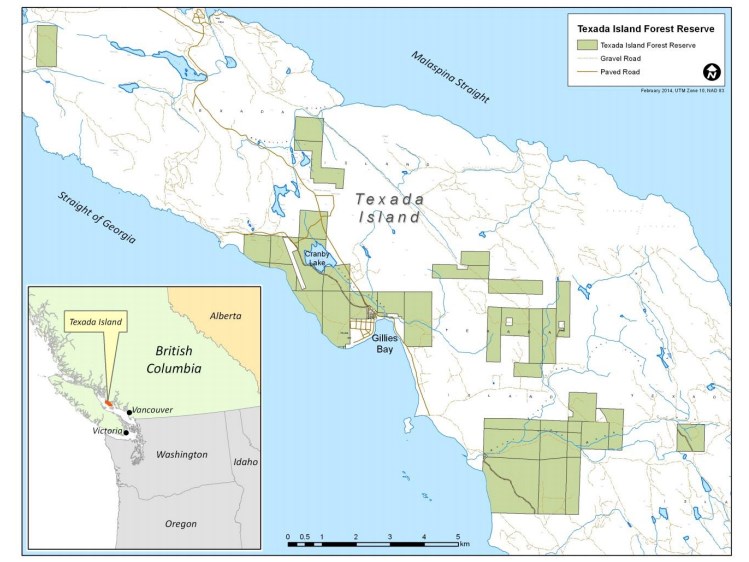 Management for more than 6,000 acres of private forest land on Texada Island involved in a recent $19.4-million land deal will not change due to the sale.

"We can say that the management of the property will continue in the fashion it has in the past,” said Muenter. “I don't think anyone will notice any difference.”

Kootenay-based Selkirk Mountain Forest purchased the 6,327 acres, just under one per cent of Texada’s total land mass, for $19,379,000 on September 15.

The land is broken up over seven parcels, but one of the largest surrounds Gillies Bay and is located directly adjacent to Texada Island Airport. It includes three-quarters of private Cranby Lake and other smaller parcels to the north, east and south of the town.

"Texada Island Forest Reserve set a high standard for logging practices on Texada in stewarding the land for the long term,” said McCormick.

Muenter confirmed that Selkirk will have a similar approach to managing its newly acquired trees. She added that while signs on the road will change to reflect new ownership, the community can expect the impacts of forestry management and the company’s interactions with islanders “to continue in the same spirit.”

According to the prospectus for the sale, Texada Island Forest Reserve’s focus had been on selective harvesting and thinning to improve the quality and mix of trees in the forest, about 60 per cent of which is coastal Douglas fir.