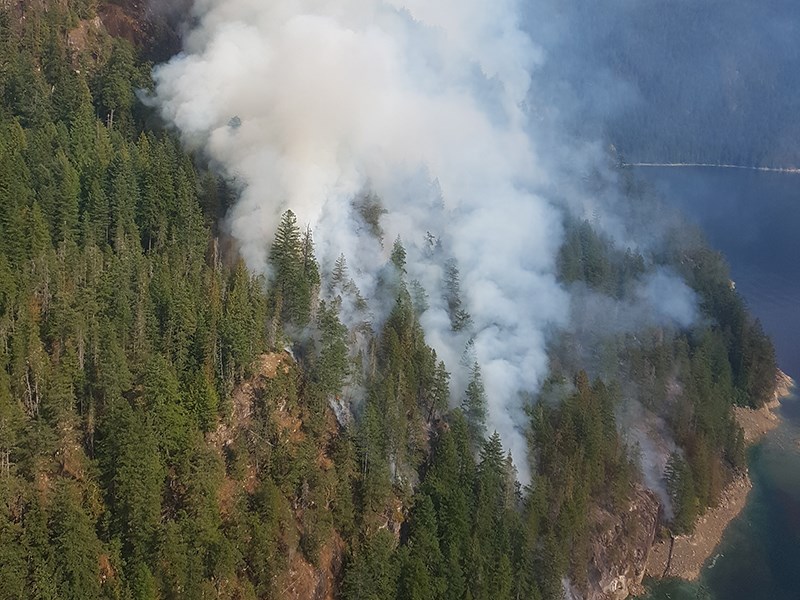 A crew of five firefighters, including members of Powell River’s BC Wildfire Service (BCWS) Initial Attack Crew and one helicopter, are reinforcing control lines on an out-of-control fire on East Redonda Island.

The suspected cause is human.

On August 28, BC Parks had decided to let the Redonda wildfire burn, according to BC Wildfire Service (BCWS) communication assistant, Dorthe Jakobsen.

The fire, which is located inside the island’s ecological reserve is burning up from the eastern shoreline near the head of Pendrell Sound.

The island is located 40 kilometres northwest of Powell River.

A crew of five was sent in on Monday, August 27, and worked on establishing a control line before being taken off the site on Tuesday, August 28.

“We’ve built a control line and we also have identified what we call trigger points,” said Jakobsen. She explained trigger points as geographic locations that are monitored daily.

“We watch it,” said Jakobsen. “We monitor it daily and we watch it very carefully and if the trigger points are breached then we start talking about doing something different.”

The crew worked on establishing new control lines after previously established trigger points were breached by the fire on Wednesday, August 29.

BCWS warns boaters, kayakers and aircraft not to approach active wildfires, such as the East Redonda Island fire.