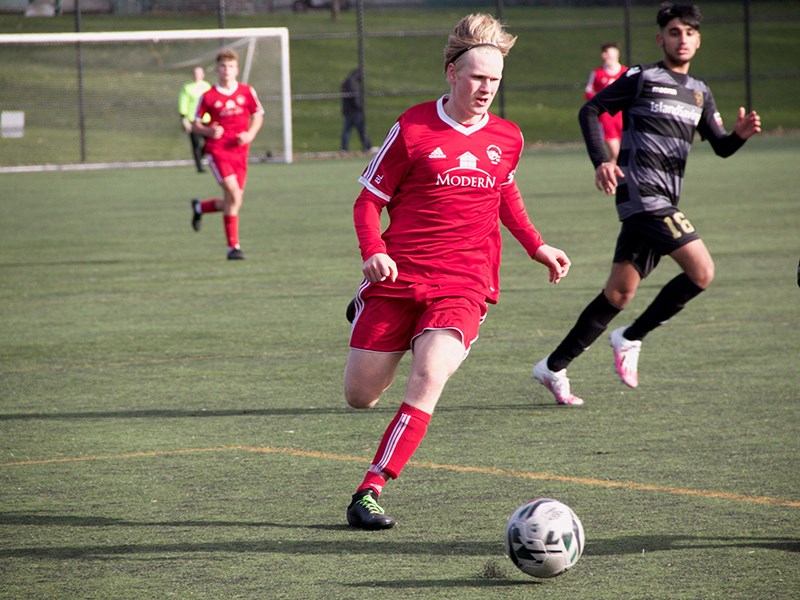 Victoria Highlanders scored five times in each half en route to a 10-0 win over Powell River Villa in Vancouver Island Soccer League action on Sunday, October 25.

After leaving Powell River in the morning, Villa arrived just 30 minutes prior to kickoff, which contributed to a slow start for the team.

“Getting off the bus with tired legs, it wasn’t ideal but that is what we have to do during this time,” said Villa coach Chris McDonough, referring to the fact that staying overnight in a hotel during the pandemic is not an option. “We don’t want to make excuses but the travel was pretty tricky; we were slow to get going in the game.”

It was a tough game for us,” added the coach. “We were missing quite a few regulars, it was a really young squad we brought down there, and Highlanders are a really deep team.”

McDonough said lessons were learned by those in the lineup, which included many young players, several of whom suited up for their first game in Division 1.

“There are things we can take away from the game to work on and improve for the next game,” he added. “It is the development of going with a younger team and working through some of these challenges.”

McDonough said goaltender Scott McKenzie was his team’s strongest player for the second week in a row, despite the final score.

“He had a lot of work for us again, and made some fantastic saves.”

The coach also gave credit to the players who travelled to Victoria and back in one day, with 90 minutes of soccer sandwiched in-between.

“Hats off to everyone who made it down there,” he said. “We had a full lineup, but were just missing some of our top players.”

In its next game, Villa (0-3) faces defending champion Lakehill FC (2-0) for the second time this season. The match will take place at Braefoot Park in Victoria on November 7.

The schedule to start the season has been difficult, according to McDonough, with the first four games against two of the league’s top teams.

“We're getting some tough competition right off the bat,” he said. “Seeing what the best competition is like has been a big learning curve for us.”

A bye this weekend will allow some of the players who missed the last game due to injury to heal, giving the coach an opportunity to field a stronger lineup when Villa next takes the field.

“We want to try to get our best team down there,” said McDonough. “The week off will give us time to regroup.”

Powell River is at the bottom of the ten-team Division 1 table with Cowichan FC. The two winless teams will meet in Powell River on November 14.