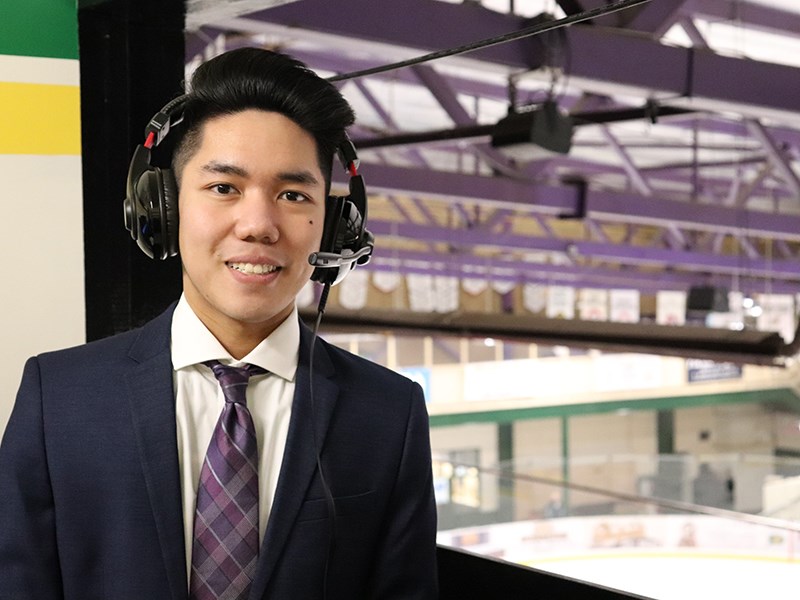 PLAY BY PLAY: Justin Sulpico moved to town in September to take a position with the Powell River Kings. COVID-19 has delayed his broadcasting debut with the team.Contributed photo

Powell River Kings added Justin Sulpico at the beginning of the season as their new broadcaster and social media coordinator.

At just 21 years of age, Justin Sulpico has already crossed off one of his career goals; he called a game for the BC Hockey League’s (BCHL) Chilliwack Chiefs within a year of graduating in 2019 from the Radio Arts and Entertainment program at BCIT.

“It was just initially wanting to work in sports, but in some way shape or form broadcasting was way up at the top,” said Sulpico. “In high school I was doing the PA [public announcements], announcing basketball games, writing articles for the school paper or scorekeeping. Being involved with that, it was further emphasized by going to BCIT and then having many more doors open up for me and much more opportunities.”

Originally from Abbotsford, Sulpico spent the 2018/2019 season doing play-by-play for his hometown Junior B Abbotsford Pilots of the Pacific Junior Hockey League. He had previously held positions with Fraser Valley Thunderbirds hockey club in Abbotsford, Columbia Bible College of the PAC West and was social media coordinator for the Fraser Valley Bandits professional basketball team.

Sulpico dabbled in basketball, baseball, roller hockey and cross-country growing up, but joked that he works in sports because he can’t play sports.

“Back in January of 2020, I heard there was an opening for the Kings for the upcoming season and then COVID shut everything down; fast forward to around June or July and I followed up,” he said. “The transition has gone fairly well; even though it’s been since September, it still feels new, just because with all those restrictions and things.

“I still feel like the new kid. I’m adjusting to small-town life. I came from Abbotsford which isn’t a big town but is in contrast to Powell River. I’m enjoying it so far.”

Sulpico was looking forward to travelling with the Kings but has been unable to do so thus far with coronavirus disrupting the season.

“I’ve never had the experience to travel with the team bus and things like that; just the way the leagues were set up everything was local travel,” he said. “I was looking forward to announcing with the team; our first game was supposed to be in November."

The BCHL preseason schedule was set to start later than usual due to COVID-19, and the night before the Kings’ first game the initial round of restrictions were put in place, which cancelled that game and any scheduled to follow.

If a season does take place, Sulpico will head back to Abbotsford afterward to take care of prior commitments before returning to the Kings for the 2021/2022 BCHL season.

He said his career goals are similar to anyone involved with hockey.

“There is so much potential and there are lots of chapters to be written,” he added. “Obviously it’s a goal for anyone working in hockey, whether you’re a player or off the ice, it’s the NHL. I want to work at my craft and the next level up is the CHL, major junior, so maybe I can work towards that or there might be opportunities not in hockey.

“I wouldn’t be opposed to working in communications or media relations, social media as well. There are so many opportunities in sports and it’s done a lot for me so far in life; I can only imagine where it can take me.”