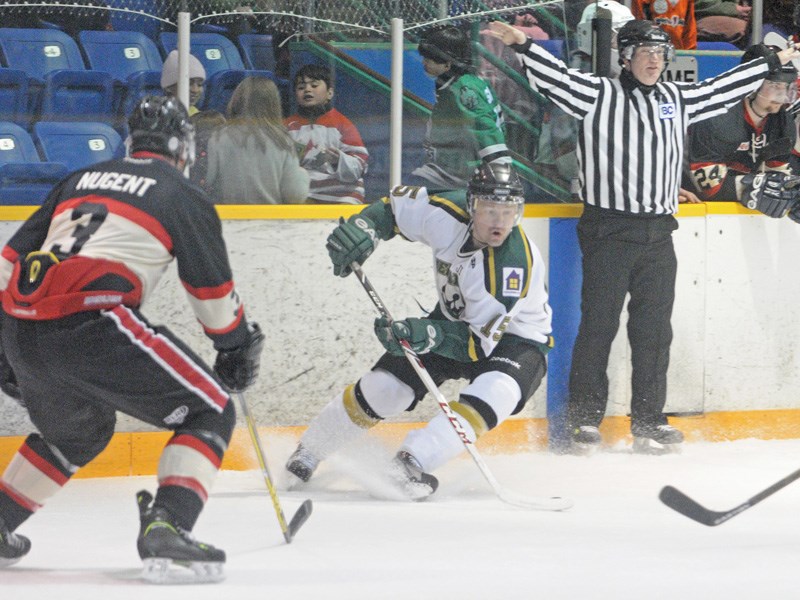 Since falling short in their quest for the Coy Cup last year, Powell River Regals have come together with three other teams, two from Vancouver Island and a fourth from Kelowna, to enable quasi-league play.

“We’ve been battling to garner interest on the Lower Coast so that we can look toward a league and schedule,” said Tod English, a former player and now an executive member with the team.

According to English, Regals have been in existence for 61 years, making the club one of the longest running franchises in BC hockey.

In addition to Powell River and Kelowna, North Island Capitals and South Island Knights round out the burgeoning league.

In the first two games of the season, played away from home, Regals lost 4-3 and 8-0 to the Knights.

“They’re playing out of the Duncan area and draw from a pool of talent from Nanaimo to Victoria,” said English. “They look to be strong.”

By comparison, he said, the current Regals are all Powell River natives. Some veteran players travel home for games from where they currently live in Vancouver and Victoria. English said keeping a consistent roster of 25 players is always difficult due to family and work commitments.

According to English, the roster is made from a mixture of players who have played from minor hockey to junior, college or professional.

“Sometimes you’ll get a late blooming kid from midget rep who never went on to play junior, but now he’s 22 and he’s really good,” said English.

Regals player/coach Andy Welsh said he is looking forward to having a set schedule so players can adjust work or holidays accordingly.

“For the first time in a long time we know when our games are going to be,” said Welsh. “I think the league is going to be competitive. If you can get a full team to show up, then that’s always going to give you the advantage.”

Games against the Knights featured rookies TJ and Mikey Markland, Connor Ford, James Southcott and Adam McLaren. Three sets of brothers took to the ice, including the Marklands, McLarens and Behans.

The team is rebuilding now, said English, but several championships have been claimed by the club over the years. When playing at the AAA level, the team won the Allan Cup national championship in 1997, 2000 and 2006 and were provincial champions 17 times.

English played on the 1997 and 2006 national championship teams.

“After the Allan Cup in 2006, we went to Belarus the next year and played the Latvian and Belarusian national teams and a KHL team,” said English. “We played a KHL team and lost 2-0; that’s like playing the Ottawa Senators.”

As a AA team, Regals won the Hardy Cup Canadian Champion-ship in 1970 in addition to five provincial Coy Cup titles from 1967 through 2010. The Coy Cup has been emblematic of provincial senior AA hockey supremacy for 97 years.

According to English, the Regals are determined this year, playing in a league with a schedule and a trip to the Coy Cup up for grabs.