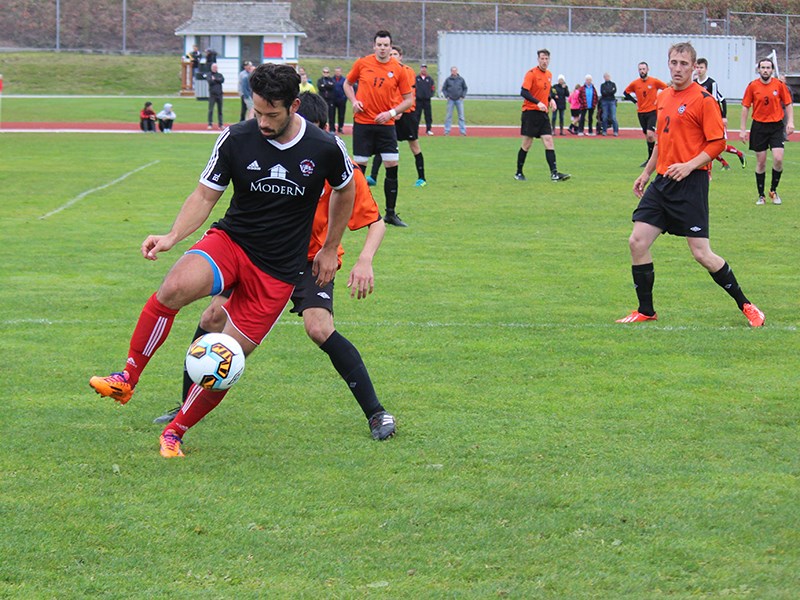 “Kye was excellent and the defence was really good,” said coach Chris McDonough. “Greg Smith and Nick Van't Schip in at centre did a really good job of controlling the game.”

Villa has held first place in Vancouver Island Soccer League Division 2 all season. Its record is six wins and one loss for 18 points, five points ahead of Saanich Fusion Bandits.

Taylor’s first goal came from outside the 18-yard box on a free kick at about the 22-minute mark.

At 71 minutes, Taylor found the back of the net again on a play that started with Jake Kenmuir.

From Kenmuir on the left wing, the play transitioned into the middle of the field. The ball came to Smith and he poked it to Kenmuir's side. With lots of space, Kenmuir took a shot, it hit and bounced off a Prospect Lake defender. Taylor came across and just tapped in the rebound.

It was Taylor’s third goal of the season, putting him in the division scoring race, along with Kenmuir; each has scored three time.

Villa’s defence is in a league of its own. McDonough’s back end is playing lights out, allowing one goal in eight games this season in a 1-0 loss to Victoria Highlanders.

“If you can get six shutouts, that's a good year, and we've got that in eight games, so that's crazy,” said Kenmuir.

But the team’s back line is losing Brandon Rairie, who is one of the best defenders in the league, according to McDonough. Rairie is moving to Regina to train as an RCMP officer.

McDonough is also looking at a short bench with a few players out with injuries: Daniel Paul and Patrick Rainville.

While the team is not allowing its opponents much in the way of scoring chances, Villa has not hit its stride scoring goals, according to Kenmuir.

“At the beginning of this season we were struggling to score; we'd break things down but couldn't really find the net,” said Kenmuir. “We had four games in a row where we scored in the last five minutes of the game.”

What separates Villa from the rest of the division right now is defence and fitness. No other team has shown they can run with Villa for a full 90 minutes.

“Our fitness is really good and we're a young team that can run with anyone in this division at this point,” said McDonough.

Kenmuir credits Smith for that.

“Greg has been instrumental in how we train and all of the fitness stuff,” said Kenmuir. “He worked with the guys in the summer to keep everyone fresh and then coming into the season he took over training sessions at the beginning and did just a super job keeping everyone fit and healthy.”