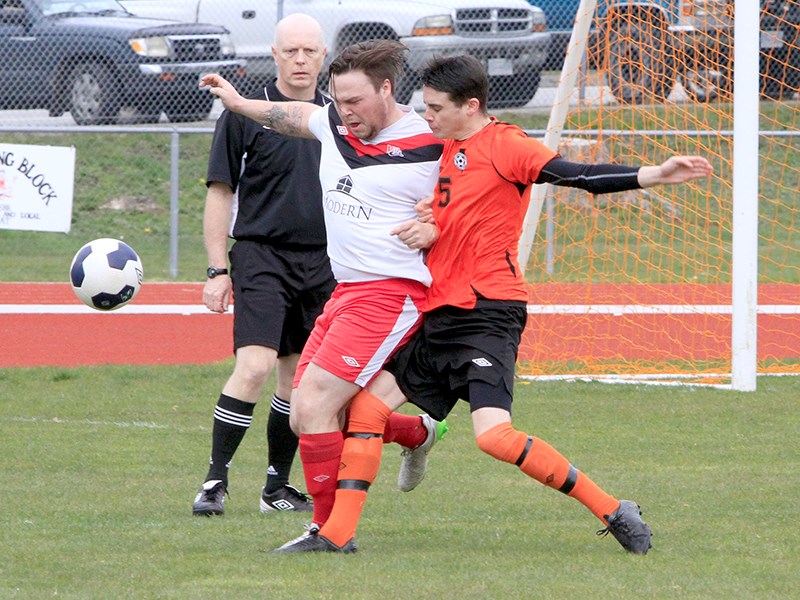 SEASON FINALE: Powell River Villa’s Braxton Leask [centre] attempts to regain possession of the ball during a game against Prospect Lake Lakers on Sunday, March 20, at Timberlane Park. Villa lost its final game of the season 2-1 but retains a spot in Division 2 of the Vancouver Island Soccer League for next season. Alicia Bass photo

A loss in the last minute of play in its final game of the season was indicative of Powell River Villa’s season in Division 2 of the Vancouver Island Soccer League (VISL).

After battling hard against Saanich’s Prospect Lake Lakers on Sunday, March 20, at Timberlane Park, and with the scored tied with just over a minute to play, Villa took a penalty inside its own 18-yard box and surrendered a penalty-kick goal to lose its final game of the season 2-1.

“It was a tough way to lose,” said head coach Chris McDonough. “I thought we did enough to get a tie in the game and we carried the play for most of the first half, and bits and pieces of the second half, so it’s always hard to lose right at the end like that.”

Villa finished its season with three wins, seven losses and six ties, which put them in seventh place of out 10 teams in VISL Division 2.

Despite coming out on the wrong side of many close games this season, McDonough said he was happy with his team’s effort overall, especially considering Villa had moved up to Division 2 this year. With its seventh-place finish, the club will remain in Division 2 next season.

“I’m definitely happy we stayed in Division 2 and it’s always difficult coming up from below a division, with the new teams to play against,” said McDonough. “We did leave quite a few points on the table this year, with ties and last-minute losses, so there’s a lot to work on for next year.”

The team’s final game saw Villa start off strong against the Lakers, controlling the majority of possession for the first 20 minutes.

Villa opened the scoring about halfway through the first half off a defensive error by Prospect Lake. Midfielder Nick van’t Schip capitalized on a loose ball, saw the Lakers goaltender off his goal line and slotted it into the corner as the keeper was trying to get back into position.

“Nick took advantage of the situation and it was a smart play for him to have a go at it from far out and score,” said McDonough.

Prospect Lake battled back, however, scoring from short range off of a Villa defensive breakdown with about two minutes left in the first half.

Between halves McDonough said he told the Villa players to stay loose and try to enjoy their final game of the season.

“I was mostly happy with how we played in the first half, and I told them just to have fun,” said McDonough. “It was last game of the season and it wasn’t going to affect the standings, so we were just trying to enjoy the last game, but I was still trying to push the guys to go for a win.”

McDonough gave his backup players some game time in the second half, which saw Prospect Lake control the majority of the play. Villa goaltender Cory McCracken made some big saves to keep the match tied 1-1.

Villa pushed late in the game with a corner kick, but the Lakers countered and had brought the ball deep into Villa’s end when the home team took the unfortunately timed penalty.

Villa’s Jeremy Prosser clipped an opponent’s leg just inside the right edge of the box, resulting in the final-minute penalty kick and subsequent winning goal from the visiting Lakers.

“It was a good game. They are a big, physical team, but we tried our best,” said Braxton Leask, one of Villa’s strongest players in the game. “We were the better team out there, but it was a tough way to finish.”

Despite the loss late in the match, McDonough said the players enjoyed their final game of the season and have lots to build on for next season.

“It was light out there, everyone got to play and it was fun, so our last game was how we wanted it to be,” said McDonough. “It would have been nice to get the win, and we made a go at it near the end, but sometimes that’s just how it goes.”