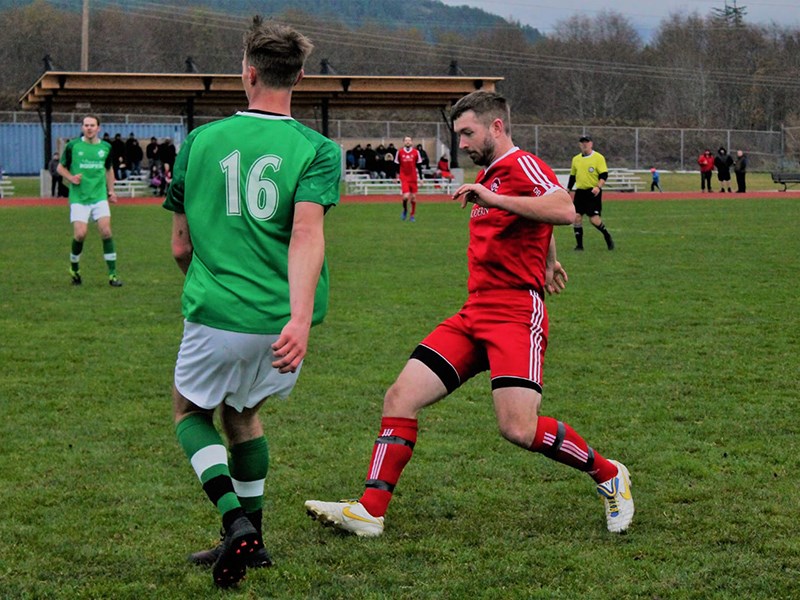 Powell River Villa played its first home game in four weeks at Timberlane Park on Saturday, November 23, achieving a 1-1 tie with Vic West FC in an exciting and physical game played in front of the largest crowd this season.

“It wasn’t the best weather, but it was an entertaining game,” said Villa coach Chris McDonough. “There was a great crowd in the stands and they were pretty loud, which contributed to a great atmosphere for our return home to Timberlane.”

“Vic West scored about halfway through the first half,” said McDonough. “Our goal came at the end of the first half, with Richard Murphy directing a header into the goal off of a free kick. We created quite a few chances throughout the game, and it was nice to be able to capitalize once.”

McDonough commended the defensive line for its excellent play.

“Nick Van't Schip had a great game,” he said. “He marked Vic West’s top player and did a good job staying on top of him for the whole game. Carl Hanson also had an excellent effort defensively.”

“As we get closer to the end of the season, every point is valuable,” said McDonough. “Our goal is to remain in Division 1, and right now we’re on course to do that. There are some big games coming up, and we know we can get points off of any team in the league.”

Villa’s next opponent is Gorge FC, who are undefeated this season with five wins and six draws.

“We tied Gorge when they were here in October,” said McDonough. “They are a good team and will definitely be a challenge for us when we face them on their home turf.”

“The team is an ever-evolving thing,” said McDonough. “Players come and go, the team changes from year to year, and even changes throughout the season. The goal is always to make us a stronger team.”

A fundraiser and social for the Braxton Leask and Dylan Buckle Memorial Scholarship followed Saturday’s game.

“We had a full house at the soccer club for the fundraiser,” said McDonough. “Vic West joined us for the social, and the community and everyone involved in Villa has been very supportive of the scholarship. It was great to see, and that made it a special night for a great cause.”

Villa faces Gorge FC in an afternoon game on Saturday, November 30, at Hampton Park in Victoria. The team returns home December 7 for its last home game prior to the Christmas break, facing Bays United at Timberlane Park.