Powell River Villa hopes for resumption of play in September 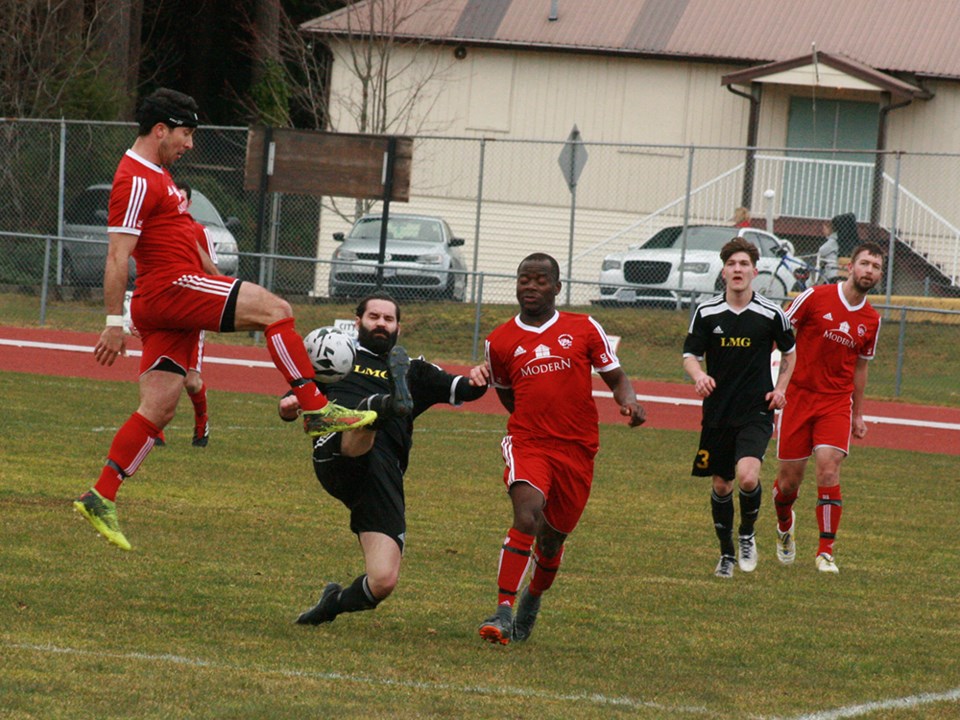 SEASON’S OVER: Powell River Villa’s season is cancelled after having played its last game last November. The hope is that play can resume in the fall. In the photo above, Villa players Kye Taylor [left] and Crispin Mulondani Mgeni [centre] battle with a Cowichan FC player for possession of the ball during a Vancouver Island Soccer League match at Timberlane Park in 2020.Peak archive photo

Powell River Villa will have to wait and see when the team can resume play.

Vancouver Island Soccer League (VISL) has cancelled the season, throwing the local team into limbo. Villa coach Chris McDonough said the season had been shut down since early November so it was “kind of inevitable.”

“I’m not totally surprised that this has happened but the league is finished right now,” said McDonough. “At least we did get to play four games. A lot of the leagues didn’t run at all. I guess we’ll take what we can out of that.

“I’m happy that we got to play some of the younger players in the league this year and give them some playing time.”

Villa was playing in VISL division one this year, and when there is resumption of play, the team will continue to compete in division one.

“We’ll prepare for that,” said McDonough. “I’m happy to get some of these young kids some playing time in division one. We ran a really young team this year because of COVID-19. It was one of the positives in all of this.”

McDonough said Villa is building for the future and he wants to be able to pull players up into the first team from youth soccer. He said Villa has more young players than they’ve had in a long time.

“There was a lot of interest in playing for us this year.”

McDonough said with the season cancellation, he is awaiting word on what can happen moving forward. He’s hoping action can resume in September.

“If they do lift the restrictions, we can go back to training and that kind of thing,” said McDonough.

As well as putting the young players through their paces, McDonough is hoping to get some of the veteran players back who weren’t able to play this past season because of COVID-19. He said the team has good numbers of players. There are good young prospects coming up and returning players from past years.

“Hopefully, we can get everybody together and start training again,” said McDonough. “It will be good to get soccer going again.”

According to an account in Victoria’s Times Colonist newspaper, COVID-19 has done what the Second World War, the Spanish Flu pandemic, and four of the five years of the First World War, couldn’t do. VISL’s Jackson Cup has been cancelled for only the second time in its 106-year history. The last time was in 1917.

“That makes it sting a little more,” stated VISL executive director Vince Greco. “More of our players wanted to play than didn’t want to play, especially anticipating that the opening of outdoor sports is coming next."

But without a concrete date for that, the board felt it couldn’t hold on any longer. League play began in September and was halted in mid-November when then-new provincial health guidelines came into effect in all sports.

“The state of limbo was too much,” stated Greco. “It was a very tricky situation. It breaks my heart. But I respect the board’s decision. I can see its viewpoint on this. You can’t plan. There is so much waiting and what ifs about getting back on the pitch.”

The pandemic had already taken a toll. There are usually 75 to 80 teams from under 21 to Masters, featuring about 2,000 players, in a VISL season. That dipped to 59 teams this season and about 1,200 players. But the top end of those remained keen.

“There were some guys just happy to go camping now but the majority of players wanted to play,” stated Greco. “They would have played into July.”

But they will have to wait until September and the new season.