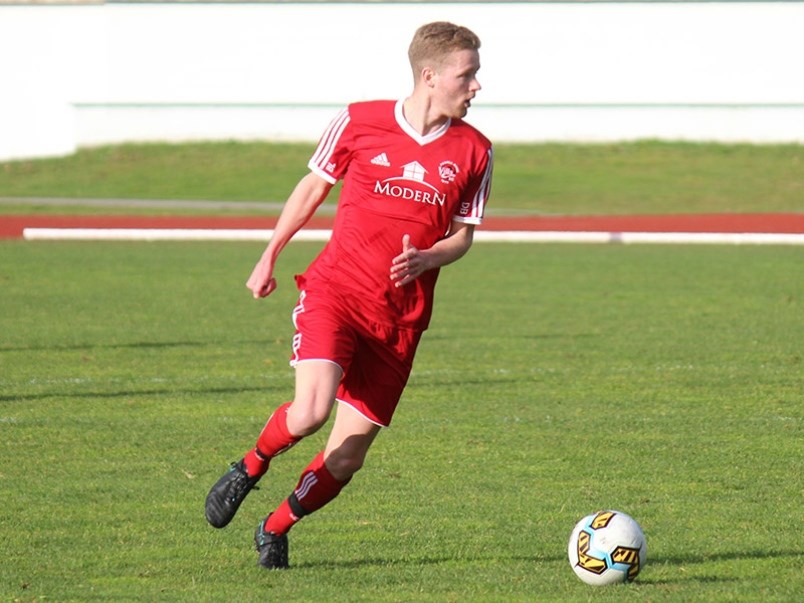 A goal by striker Jake Kenmuir gave Powell River Villa SC a 1-0 win over Vic West in Victoria on Saturday, January 26. The victory moved Villa back into first place in Vancouver Island Soccer League Division 2 standings by one point.

Kenmuir, Villa’s leading scorer with six goals this season, slotted the ball into the right corner of the net at the 16-minute mark after taking a breakaway pass from Richard Murphy.

“I was one on one with the keeper and he came out,” said Kenmuir, who is in the top 10 of the divisional scoring race. “He had a really wide stance so I just put it through his legs.”

Matt Liknes produced a clean sheet, returning as goalkeeper in the Villa net after weeks on the sidelines with a rib injury.

“He was sharp,” said Villa head coach Chris McDonough. “He made a couple of big saves in he first half to keep us in the lead.”

Villa needs Liknes’ steady presence for the team to win its division and be promoted to Division 1 for next year, he added.

Against Vic West, McDonough said the team could have played better, and finished more chances, but players still got the job done.

“We let them control some of the tempo at points in the game, which a little bit more defensive pressure might have created a few more chances for us,” said McDonough. “We kind of hung back a little bit at times.”

Kenmuir said he had three good chances in the game and the team had at least seven.

Powell River’s Carl Hanson played his third game at centre-back for Villa after signing with the team in early December. He made his presence felt all game, winning loose balls, controlling the play out of the back and breaking up into the attack. He and Murphy provide Villa with size and physicality in the middle, said the coach.

“We have a couple of six footers there who can win balls,” added McDonough. “It gives us a bit of a different look than we had at the beginning of the year.”

“Everyone wants to win the league,” said Kenmuir. “That's all everybody is thinking about right now.”

With 31 points from 10 wins, one tie and four losses, Villa is ahead of JDF All Flows by a point in the standings and two points up of Victoria Highlanders.

Villa’s next two games are against mid-level opponents but both defeated Villa in their first meetings this season. The next home game is against Prospect Lake Lakers, who beat Villa 3-2 in December.

“They're all good teams but we know we can beat anyone in the league,” said Kenmuir. “We need to just show up and play.”