Players have been on the pitch since mid-July, practicing for division one
Aug 8, 2019 6:30 AM By: Paul Galinski 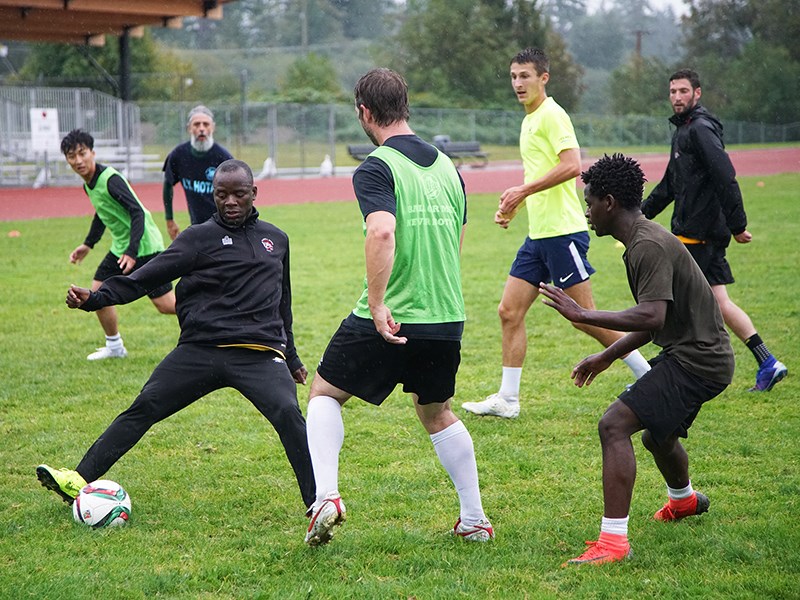 ON THE BALL: Working out in practice on a rainy August evening are members of this year’s Villa soccer club, who are dedicating themselves to their return to division one soccer in the Vancouver Island Soccer League. Paul Galinski photo

Having returned to division one in the Vancouver Island Soccer League (VISL), Powell River Villa is already preparing for the season ahead.

Villa coach Chris McDonough said the team first hit the pitch on July 18 and practices took place once a week until after the August long weekend; now the team is shifting to Tuesdays and Thursdays.

McDonough said the club has a good roster of players for this coming season. Most players from last season have been retained and there has been a lot of interest from some new players, he added.

“It feels like we’ve increased our player pool from last year,” said McDonough. “Going into division one has brought a lot of interest from players. There’s definitely a good turnout and the guys seem pretty excited about getting back into division one and playing against the best teams.”

Part of the reason for starting early is to get the team fit to compete at the highest level of the VISL.

First action of the season will be an exhibition match at 1 pm on Saturday, August 10, at Timberlane Park against Comox United, and that will be a good test, according to Villa’s coach.

“They’ve always had a good side over there,” said McDonough. “They are a division two club, just having dropped from division one.”

While Comox United and Villa have met on the soccer field previously, it was years ago, so United is an unknown commodity.

McDonough said everyone on the team is looking forward to getting some game action in.

“We’ve had a good turnout for the past couple of weeks,” said McDonough. “We are excited to get started.”

On the weekend following the first game here, there will be some game time in Comox at a mini-tournament against a few different teams.

“That will give us some good preparation for the season,” said McDonough.

The season starts the second week of September. The schedule has not come out yet but the team is hoping for the first game at home.

Timberlane Park will be a friendlier place for spectators this year with the new covered stands that have been installed.

“On those wet days it makes the atmosphere better,” said McDonough. “It’s better for the fans all-around. They’ll stay dry and that should help with our attendance.”

With the best teams on Vancouver Island competing against Villa this year, it is hoped there will be strong fan interest.

“Every game is going to be a challenge and there will be a lot of meaning in every game,” said McDonough. “We have to do especially well at home this coming season. We have to pick up points at home and make it tough on teams coming up here.”

It has been about 12 years since Villa was last in the first division but the club has a great tradition playing at the highest level, especially during the 1990s and early 2000s, when Villa was a powerhouse in division one.

“We are not quite there but we want to be really competitive this year and do our best to get results, at home especially,” said McDonough.

There is a good mix of young players and veterans on the squad and some new people have come into town who have been coming out to practice. There is also some graduating youth players vying for spots on the team and teammates who have been with the club for a long time are returning.

“It’s a long season and during the last few years, we’ve been trying to keep a big player pool so if people are not available for games, we have people who are ready to step in,” said McDonough. “We are constantly trying to recruit players to keep the lineup fresh.”

Switching to division one will possibly make travel easier this season because there are three teams north of Victoria in the division. That means the Villa won’t always have to overnight during away games.

“It’s less of a burden on the club and easier on the guys,” said McDonough. “Last year, every out of town game was an overnighter except for one. It’s nice playing in division one.”

Because of the travel, being a member of Villa requires a lot of fortitude. The club logs many hours on the road during away games and Powell River has to travel more than any other team in the league.

“It’s something we’ve gotten used to but it definitely takes some commitment,” said McDonough. “Guys coming into the team are well aware of the travel and everyone seems to embrace it.”