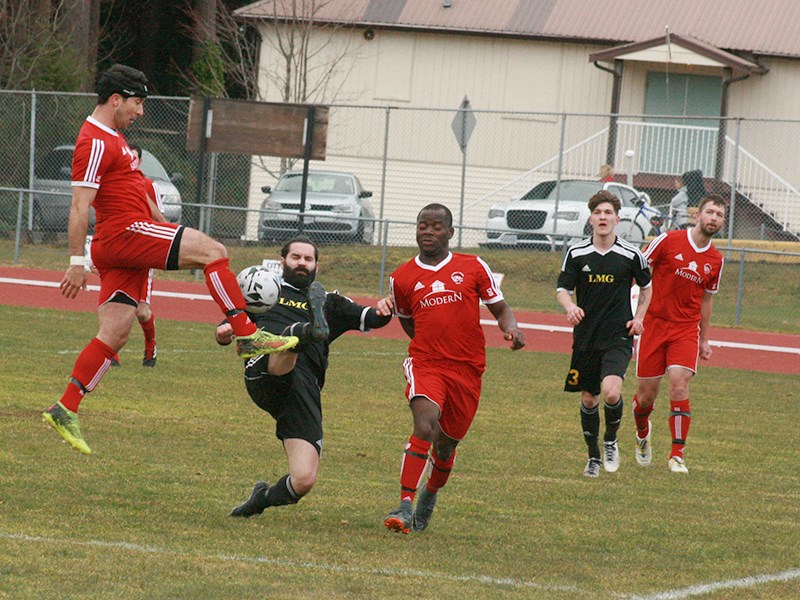 KICKING HIGH: Powell River Villa players Kye Taylor [left] and Crispin Mulondani Mgeni [right] battle with a Cowichan FC player for possession of the ball during a Vancouver Island Soccer League match at Timberlane Park on March 7. The final score of 0-0 was not enough to get Villa out of the Division 1 relegation zone for the season. Vanessa Bjerreskov photo

Powell River Villa held fourth-place Cowichan FC to a scoreless game in their final match of the season at Timberlane Park on March 7.

“The players really threw it all out there, and we came really close to scoring a couple of times,” said Villa coach Chris McDonough. “I believe it was our most cohesive effort of the season. Everyone was working hard for each other on the field, and it was good to end the year on a high note.”

Villa had to win the game in order to remain in Division 1. The tie left Villa in ninth place, which means they have been relegated to Division 2 for the 2020/2021 Vancouver Island Soccer League season.

The 0-0 score against Cowichan is an indication of the level of play Villa is capable of, according to McDonough.

“As we saw on Saturday, we are competitive with one of the top teams of the league,” he said. “We got good experience playing at this level, so we’ll take that back to Division 2 next year and try to get back up to Division 1 the year after; that’s our goal. It’s also important to remember that we were promoted two consecutive years, from Division 3 to Division 1 for the first time in 13 years. As a club, we’ve come a long way very quickly, and that’s a great achievement.”

Liknes made several saves during the game to keep Villa’s hopes for the win alive.

“Every time I make a great save, it feels amazing,” he said. “It feels like a goal, really, because there’s no difference between getting one down in their end and stopping one in ours. You don’t get the big celebrations like you do when you score a goal, but deep down I know it’s the same.”

McDonough felt the whole team played the best it has all season, but singled Liknes out for his play.

“Matt made some huge saves to keep us in the game, like he has all year,” said the coach.

Now on summer break, Villa will begin practicing in July for the next season, and aim to place in the top two positions in Division 2.

“The way we played this season showed us that Division 1 is an obtainable goal,” said Liknes. “Most of our players, myself included, haven’t played in Division 1 before. This year showed us that we can compete with the best of them.”

Villa is grateful for the support they’ve had from the community over a tough season.

“Our fans have been there with us every step of the way, and we really appreciate it,” said McDonough. “We know that next year won’t be an easy journey either. Division 2 is still a good and competitive level, but we feel we’ll have a solid team next year and are looking forward to the fresh start. We’ll see everyone at Timberlane in the fall.”