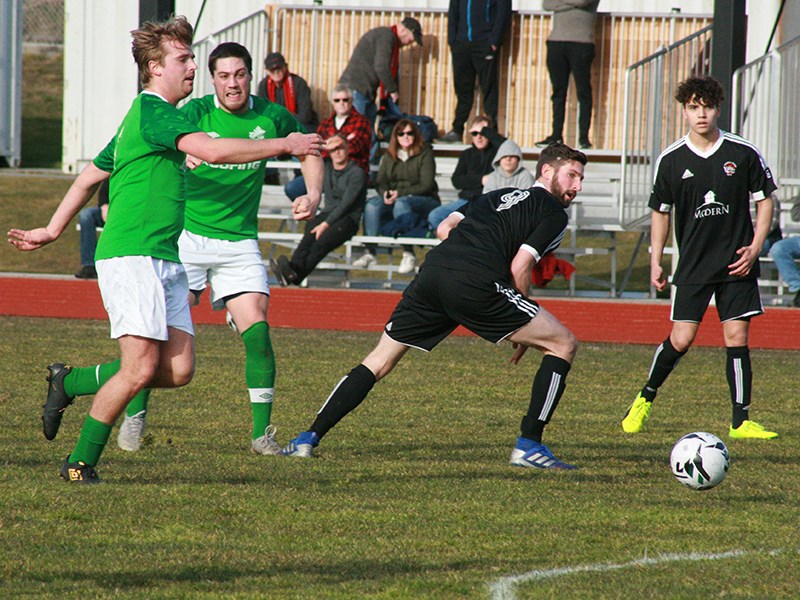 Powell River Villa lost to Vic West 2-0 in its round-of-16 match for the Sir John Jackson Cup at Timberlane Park on Saturday, February 22, and has been eliminated from cup play.

“We had a decent effort, but we also had quite a few lineup changes from the previous week,” said Villa head coach Chris McDonough. “That had an impact on how cohesively we were able to play, and against a good team like Vic West, it just wasn’t enough.”

Injuries and previous commitments had already left Villa shorthanded for the game, and Keaton Fougere’s first-half ankle injury only exacerbated the situation.

“I don’t think we were there as a team,” said player Carl Hanson. “We just didn’t jell on the field.”

Vic West opened the scoring at 20 minutes in the first half. Villa was able to hold off the visiting team for the rest of the half, but Vic West kept up the pressure in Villa’s end and were able to add another goal at 52 minutes.

Villa’s one scoring opportunity was ruled offside, but Matt Liknes, Villa’s keeper, made several outstanding saves to keep the score at 2-0.

Villa will now focus on its rescheduled regular-season match against Cowichan FC March 7.

“Arguably the Cowichan match is more important than the Jackson Cup, and is perhaps our most important game of the season,” said McDonough. “We have to win to have any chance of staying in [Vancouver Island Soccer League] Division 1.”

If Villa wins against Cowichan and Juan de Fuca All Flows lose their evening match against third-place Bays United Liquor Plus, the two teams will be tied in points for eighth place, outside the relegation zone. To break the tie, the league considers head-to-head wins, then head-to-head goal differentials; Villa and All Flows have tied their games against each other this season. The next tie-breaker considered is the FIFA Fair Play Tiebreaker, where the number of disciplinary cards per team is considered. Villa has 17 red and yellow cards over the season, while All Flows has 22.

“Our game on March 7 is a must-win, and we have to hope that Juan de Fuca loses,” said Hanson. “We have to have confidence in our teammates and connect the dots. It’s the only option, pretty much.”

The Jackson Cup loss may be a blessing in disguise for Villa, as it allows the team an additional week for injury recovery and practices.

“We have scheduled extra training sessions over the next couple weeks to keep our fitness at the top level,” said McDonough. “A big part of us being successful against Cowichan will be having as many players as possible available. If we have everyone there, we’ve got a good chance to win.”

“We are looking forward to playing our last game of the season in front of a home crowd,” said Hanson. “It’s been a tough season, and we really appreciate all the support we’ve received.”