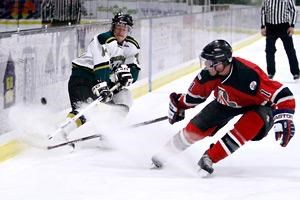 The round-robin format adopted by the three teams, Powell River, Courtenay and Sechelt, started last weekend and will wrap up with games scheduled for Sechelt this Friday, Saturday and Sunday.

The Blazers’ bench was typically short for a visiting senior men’s team but the talent was deep as evidenced by their play in the opening period.

Blazers got right to work and with some good pressure down low Karl Hagg scored on a shot from a bad angle at 2:35.

Regals went up a goal when Ricky McLaren’s point shot slipped through on a screen but Mid Island was right there to tie 2-2 a minute later.

They went up by a goal at 11:35 on Hagg’s second of the game and took a 3-2 lead into the dressing room after the first 20 minutes.

However, things started to unravel for the undermanned Blazers in the second period as the Regals struck for three unanswered goals.

Keegan Young led the way with two and Stu Kunaman added a single to give the Regals a commanding 5-3 lead after two periods.

In addition to the goals, Regals were also given a huge lift when goalie Rene Holmgren stopped Blazer captain Al Denis on a penalty shot midway through the period.

Holmgren moved out to take away the shooting angles from Denis and then snuffed out the backhand deke by standing his ground and moving with him to his left. With virtually nothing left for Denis to shoot at, Holmgren deflected his weak shot wide of the net.

Blazers hung in there with the Regals but eventually the extra manpower and conditioning of Powell River wore them down.

Andy Welsh and Joe Caldarone, on a nice solo effort, rounded out the scoring.

“It hasn’t been a goal-scoring year for me this year,” said Caldarone after the game. “I’ve been picking up other parts of the game because I’m playing centre this year and I’m working on the faceoffs and defensive and physical play too, so I pride myself in that.”

Maybe the quantity is down but the quality was sure there as he made some smooth moves to score his goal.

He was thrilled to contribute to the 7-3 win but cautioned you can never let your guard down against the talented Blazers.

“It’s easy when you see a short bench on the other side to think it’s going to be an easy game,” said Calderone. “They came out pretty good but we started to wear them down and you could tell in the third they were starting to get tired.”

Both teams will get some rest before this week’s action against the Sechelt Hitmen.

“Will Malcolm, Rich Kellington, Dale Lupul and Blair Tassone will probably join us for our game on Friday against Sechelt,” said coach Tod English. “The deadline for adding players is February 10 and we have to make sure we have enough players for the Coy Cup if we go. So if our local guys can’t get off work, then we go to our alumni and if they can’t fill the roster then we have to search for players.”

Regals work toward that when they take on the Hitmen Friday, February 4.