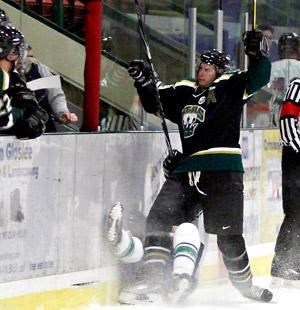 Tasers have recently been scrutinized by agencies around the world for their lethal potential but perhaps Hockey BC should be taking a look at the equally potent hockey sticks of the Powell River Regals.

Certainly the graphite weapons were just as deadly on Saturday night when the Regals used them eight times to down Sechelt Hitmen 8-0.

As lopsided as the score was it was the Hitmen who had the first good scoring chance of the game. Right off the opening faceoff they broke in on an odd-man rush where Regal netminder Rene Holmgren had to make his biggest save of the night.

“He came around on my right side and I usually do a bad job in the first period,” said Holmgren, “but I threw out the glove and I got it. It gave me confidence for the rest of the game.”

As it turned out the save also lifted the Regals as they scored early and often throughout the remainder of the contest.

Randall Smisko opened the scoring at 18:10 on the powerplay but after that it was all even strength goals that powered the Regals to the win.

Andy Welsh made it 2-0 at 18:36 when he flew down the left wing deep, cut for the net, took the goalie down and swept the puck in.

“It’s something I’ve probably missed a hundred times in practice but I finally cashed one in,” he said after the game.

Regals cashed in six more times before the game was over as they added three more goals in each of the two remaining periods to get the job done.

Tyler Labree, Eric Albertson and Jordy Smith made it 5-0 after two periods with Blake Rice adding one and Welsh and Smith getting their second goals in the third.

While the score was a big one for the team, not all of the players were in uniform to celebrate the victory in the dressing room.

Will Malcolm, who has been extremely instrumental in a couple of Regals wins this year, was ejected midway through the middle period.

“It was one of those times,” he said, “when push comes to shove. I do what I do and my stick came up on the guy and I got a penalty.”

Hitmen’s Brad Wingfield had taunted Malcolm to the point where tempers boiled over.

With Malcolm out of the game, Wingf’ield turned his sights onto a few other Regals and after a brief exchange chased Regal Stu Kunaman all the way to the Regal bench for one last Hitmen lowlight.

He and Chris Hamilton took turns pounding Kunaman as several other players from both teams flew into the pile late in the third period.

Cooler heads eventually prevailed but messages have been sent by both teams that the round-robin games starting this week will be contentious ones.

“It was kind of scrambly at the beginning,” said coach Tod English, “but we gradually got the legs moving. We need to be tested because if we’re the ones moving on there’s no doubt the interior teams are tougher, especially there.”

A round-robin format between the three teams will determine the two finalists for the Andy McCallum trophy. Regals and Mid Island Blazers start it off with a game at 7:30 pm, Saturday, January 29 at Hap Parker Arena.