Sport offers physical and mental benefits for everyone 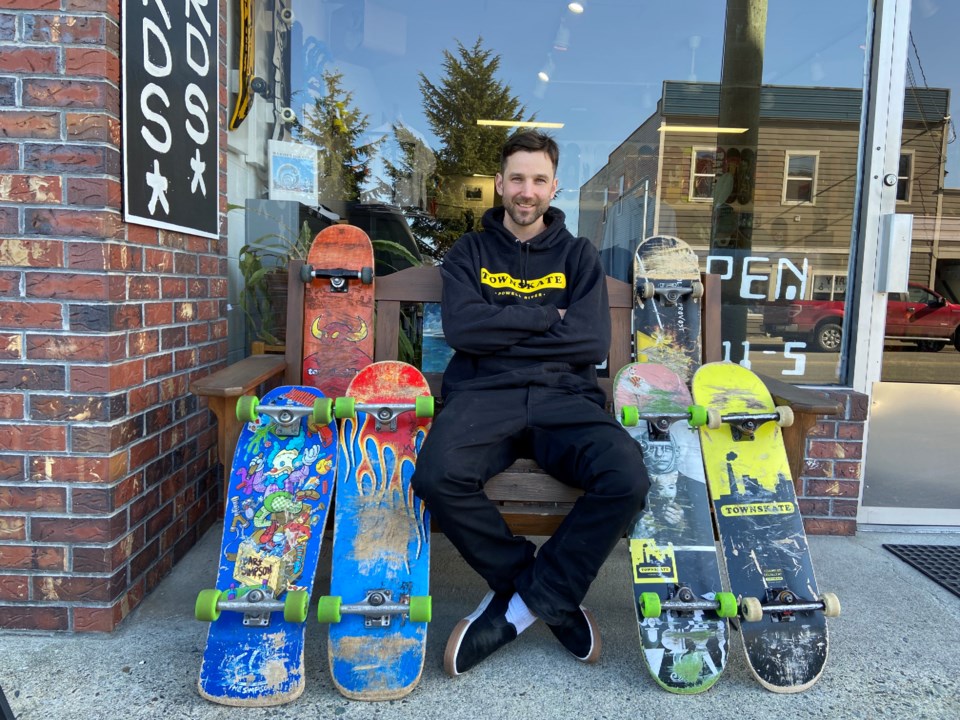 GO SKATEBOARDING: Townskate owner Tim Ladner believes that skateboarding, which will make its Summer Olympic debut in Tokyo 2021, can be a great sport for anyone. He says it teaches persistence, determination, balance, and physical literacy, as well as being a great mode of transportation. Vanessa Bjerreskov photo

Skateboarding will make its Olympic debut in Tokyo next year, and Townskate owner Tim Ladner wants to help grow the sport in Powell River.

“I started skateboarding when I was 13 years old,” Ladner said. “I didn’t take to soccer, so when I gave it up, I needed some kind of athletic outlet. Skateboarding is a big workout, both for your body and your mind. You’re always learning, and there’s no such thing as mastering it.”

Ladner opened Townskate, Powell River’s first skateboard shop, in October 2018. “Last year we worked together with the recreation complex to offer skateboarding for beginners and a drop-in tutorial session for more experienced skateboarders. The cement surface of the ice rinks is ideal flat ground to learn on, and one thing we don’t have much of in Powell River is flat ground,” he added with a laugh.

While skateboarding has a history of being counter-culture, the community has changed. “Skateboarding has grown a lot to become the sport it is today, and there’s definitely a big, welcoming community around it,” said Ladner. “It’s intergenerational, and there’s a very low monetary barrier to entry. You can get a good board for just over $100 at Townskate, and once you’re at the park, nothing sets you apart. I bring my kids to the park all the time, and I see people from ages three to 50 there with their boards.”

The physical and mental skills required to skateboard also make it great cross-training for other sports, according to Ladner. “Soccer players, gymnasts, and martial artists will skateboard in their off-seasons,” he said. “The coach at the Powell River Curling Club told me he always asks people if they’ve skateboarded, because the way curlers push on the ice is exactly the same way you push on your board. It gives them an edge.”

Skateboarding is also an activity that can be done with physical distance. “We might not meet in big groups right now, but that doesn't mean we have to give up skateboarding,” said Ladner. “It’s fairly easy to maintain physical separation from other people at the park, and your only contact is with the concrete and your own board. It’s also a great mode of transportation that naturally keeps you at arm’s length from others, and is a physical activity just like biking and hiking.”

With Covid-19, the spring and summer skateboarding classes have been cancelled, the second annual Townskate Jam scheduled for late May is on hold, and the shop is currently open by appointment only, but Ladner has not stopped working on increasing the opportunities for skateboarders in Powell River. “The Vancouver Island University carpentry program has volunteered time and resources to build some small, easy-to-transport obstacles,” he said. “When they’re done, we will be able to turn any tennis-court-sized plot of concrete into a training area.”

To keep up to date on when lessons will resume or to contact Ladner for more information on skateboarding, visit Townskate on Facebook.