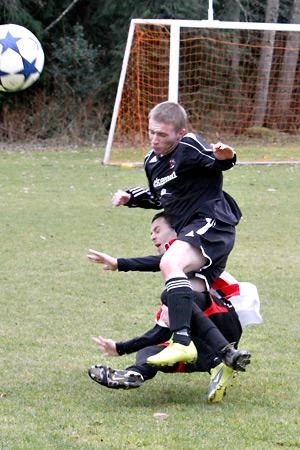 It wasn’t pretty but in the end Powell River Villa got the win it needed over a stubborn squad from Salt Spring Island.

Just 10 men made the trip for the visitors and despite coming up to Powell River on Saturday for the Sunday match, they looked to be a little sluggish during warmup.

Villa, on the other hand, was licking its chops at the sight of the weakened side and, needing a win desperately, couldn’t wait to get the game underway.

It started out predictably with Saltspring FC conserving energy while Villa moved the ball around, taking advantage of its extra man.

After 10 minutes it was evident that Saltspring was content to give Villa ownership of the ball but the visitors closed ranks around the 18-yard box to stymie the Villa attack.

Eventually, Villa did manage to break through when, at 25 minutes in, speedster Jordan Peters was covered by two defenders. However, he beat them both on the same move and ripped a shot that was saved by the foot of the keeper who was hugging the near post.

That seemed to spur Villa on and a couple of opportunities presented themselves, one a cross into the box that was headed just wide by Kye Taylor and another by Peters that resulted in a foul and penalty kick awarded to Villa.

Taylor is the designated expert from the 12-yard mark and he calmly hit the ball about mid-height into the net beyond the reach of Saltspring’s keeper.

Up 1-0 and a man was a great situation for Villa and the halftime break presented an opportunity to remind the players of that.

Someone, however, forgot to tell Saltspring whose players came out with renewed energy and determination to even the score.

At the 60th minute Saltspring took advantage of a defensive lapse that resulted in a loose ball and a dangerous situation in front of Villa keeper Cory McCracken.

McCracken rushed out to the edge of the 18-yard line to break up the play and in his usual physical manner got too much of the player and not enough of the ball, resulting in a penalty kick awarded to Saltspring.

Jason Moulton stepped up to take the shot which was almost deflected clear by a diving McCracken but the ball did settle into the top corner of the net to tie the game 1-1.

Obviously shocked by the sudden turn of events, Villa stepped it up a notch and worked hard to regain the lead.

They finally got it midway through the second half with a beautiful goal scored in textbook fashion.

Dylan McLean hit a beautiful ball over to Taylor who launched his body toward the net to head the ball beyond the helpless Saltspring keeper.

“It was a perfect ball,” said coach Jamie Zroback, “and the perfect guy to be on the end of it.”

To Saltspring’s credit the team fought hard to score but McCracken was up to the task and turned players away with a couple of brilliant saves to preserve the win for Villa.

The three points were huge but coach Zroback was already looking ahead to the big game against league-leader Vic West FC next Saturday night at Brooks Secondary School turf under the lights.

“Three of their players, Tyler Laing, Brian Hobson and Reid Philip, are coming home,” said Zroback, “so we’d like to have a big crowd out on Saturday night.”