The graphic above and articles below were published in the Powell River News on October 2, 1969. Amateur hockey crease larger Players who start hockey season officially on October 11 will find a new innovation in goal creases.
Oct 2, 2019 8:00 AM By: Powell River Peak Staff 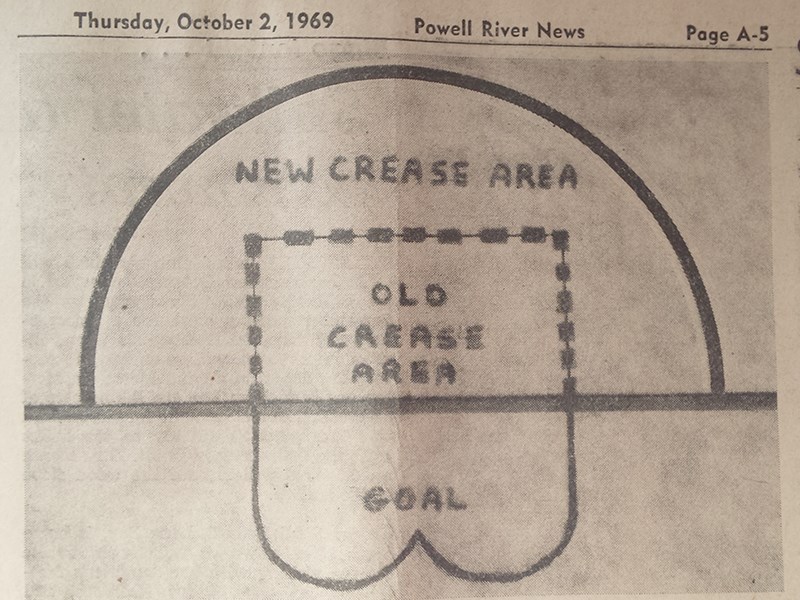 ENLARGED CREASE: To cut down on the number of goalmouth injuries and disputed goals, the size of the crease in amateur hockey has been increased to a semi-circular area which extends three feet out on each side of the net and six feet out in front of the goal. Powell River News graphic, October 1969

The graphic above and articles below were published in the Powell River News on October 2, 1969.

Players who start hockey season officially on October 11 will find a new innovation in goal creases. The goal crease in last year’s play was rectangular, stretching from goal post to goal post (six feet) and three feet out in front of the goal.

The new crease will cover a semi-circular area three feet on each side of the net and six feet out in front of the net.

Reason for the increase in the size of the crease was to cut down on the number of disputed goals and goalmouth injuries due to scrambles for loose pucks. The larger crease will offer a goalie more protection from possible injury on close-in plays.

The ruling was adopted for all amateur play during the annual general meeting of BC.Amateur Hockey executives at Hotel Vancouver on September 12.

“Other than that (the crease change),” said Bert Long, “there were no other serious changes in the rules.”

By Powder Pig and Powder Puff

Are you thinking that the air may be getting nippier these days? Then you must be a skier at heart?

Following the election of officers the rates for the coming year were outlined as: juniors $8, seniors $13 and families $18. Same as last year.

A working member was defined as one who has put in at least three work parties with the club.

Work parties will be held every Sunday at the hill from October 4 until November 23. This year work will be concentrated on the hill areas as the roads are in excellent condition. Everyone is requested to bring tools with them to the hill. A power saw or handsaw, axe, hammer, and/or rake would be valuable. There is always work for all and a director will be on hand to find jobs for all.

Come on up and get a bit of preseason conditioning. We will be there rain or shine.

Ted Carlson would like to hear from those who are interested in helping to get the bunny tow finished. It will be a boon for the wee people and beginners, so let Ted hear from you. He reported that there is a minimum amount of work to be done on the tail pulley and that this could be done in a couple of sessions.

If the snow gods favour, we will have the good snows of last year, and with better roads, we hope for better turnouts once the skiing starts. Keep watching the paper for news from the club. Powder Pig and I will be keeping you informed on happenings, news, views and general skiing information throughout the season. Good skiing all! - Powder Puff