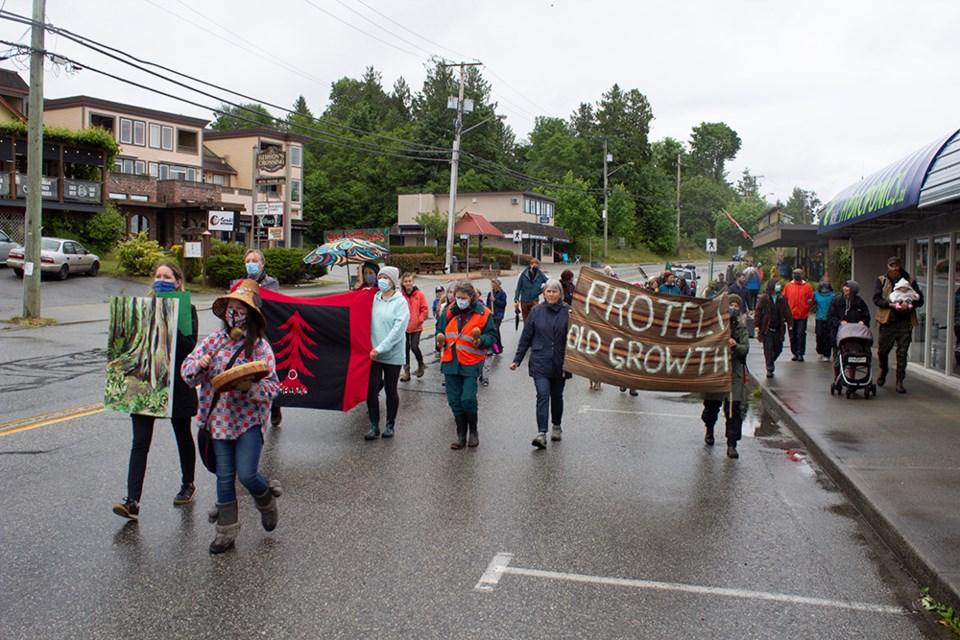 Wind and rain were not enough to discourage a crowd of more than 30 people from gathering at Powell River-Sunshine Coast MLA Nicholas Simons’ office in the evening on Friday, June 11, to call for an end to all old-growth logging.

The gathering began at the Willingdon Beach parking lot, before a march to Simons’ office on Marine Avenue for a series of speeches. Several passing cars and trucks honked and displayed supportive gestures.

The rally came after the BC government announced a two-year deferral on old-growth logging in the Fairy Creek watershed and Central Walbran, at the request of the Pacheedaht, Ditidaht and Huu-ay-aht First Nations. Those areas have recently been the focus of blockades and protests, including a gathering at Willingdon Beach on May 29.

However, those who spoke at Friday’s rally said the deferrals still leave much of the province’s remaining old-growth, including forests in the Fairy Creek area, in danger.

“What I would like, and I think what most of us would like from the province is ending all old-growth logging now,” said Terry Brown, who told the rally he was arrested and jailed in 1993 during the Clayoquot Sound logging blockades. “They’re here doing the same thing again, and the only thing that’s made a difference is you, people like you, people like us, people standing up across the province, across the world.”

Brown said the provincial government has prioritized interests of logging companies, and that clear-cut logging and arrests of activists have continued to take place in the areas near Fairy Creek.

“They’ve been listening to the corporations, to the few people who are making the last bit of profit off old growth possible before it all disappears,” said Brown.

“I feel like it’s a right that I should have to come out here and protect my future, my children’s future and my great-grandchildren,” said Blaney. “There’s only 2.7 per cent (of old-growth) left, and we have to save it.”

Blaney said she has visited Fairy Creek twice, and described what it felt like to be close to old-growth trees.

Elena Martin, an organizer with Fridays for Future Powell River, told the Peak her group has been organizing marches since September (including BC-wide events), and said old-growth forests are crucial in the fight against global warming.

“I’m totally trusting the First Nations that they know best what we are doing with this land, because I’ve only been here seven years in BC, and I’m seeing it from the climate emergency lens, and as a scientist, for me, it is clear that we are living in a climate emergency, and a biodiversity loss crisis, and protecting all of the last intact rainforest is, for me, a no-brainer,” explained Martin.

Martin said she doesn’t feel that Simons is acting as if there is a climate and biodiversity crisis.

“We have to act now,” said Martin. “We have like eight years left, otherwise we are reaching a tipping point, or maybe that already happened and we don’t know, and [Simons] is not acting like he is in a climate emergency.

“We need to protect all the old growth in BC, a moratorium right now for everything, and then we need to realize how much they’re actually doing for us.”

Martin added that old-growth areas in qathet region are also at risk.

“We have so many Fairy Creeks in our backcountry which need our attention,” she said.

Rally attendee Miel Creasey told the Peak she has visited the Fairy Creek blockades several times since March and as recently as May, when she said there was a significant police presence.

“Once we got there I felt pretty safe, being around hundreds of other people who want the same thing, and very peaceful,” said Creasey. “In your heart it’s the right thing to do, and once you’ve been in those forests you can’t really see another way.”

Asked what it felt like to spend time close to old-growth trees, Creasey paused. Blaney, standing nearby, said: “It feels freeing, it feels like your spirit, it comes alive.”

“I can’t really explain it,” she said. “It’s like this connection of me being exactly like that [the forest] is part of us, like our deepest part, and super joyful and happy, with a little low-line anxiety, because you know what’s going on. But if it wasn’t for the threat, it was a complete connection, and I was really so happy to be there.”

Creasey said she believes public pressure must continue, and that changes would not be happening without the blockades at Fairy Creek.

“I think us as a society, we have to be there to support them, and support the First Nations as well, and elder Bill [Jones, of Pacheedaht First Nation], who invited us all up there to the territory,” added Creasey.

Pacheedaht First Nation leadership asked protesters to leave its territory in April, but the blockaders were invited by Jones to continue defending old growth in the area.

“I don’t think we can give up on [Jones],” said Creasey. “He’s sacrificed a lot himself within his community, so I definitely recommend everyone going up there, whether you stay a night or two nights, and you don’t have to put yourselves in any position you don’t feel comfortable in.”