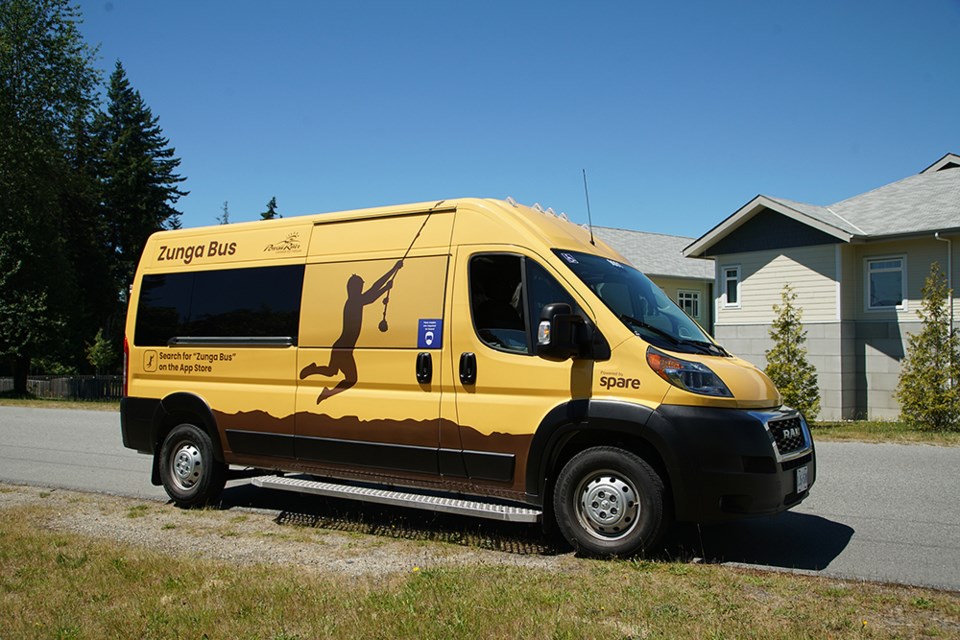 By a narrow four to three margin, City of Powell River Council approved a $130,366 expenditure to expand the on-demand Zunga Bus pilot project.

At the June 17 city council meeting, councillors debated allocating money from the COVID-19 safe restart reserve for an additional bus and increased morning hours for the remainder of the pilot, which goes until the end of the year.

Councillor CaroleAnn Leishman said staff brought forward the recommendation to use some of the safe restart reserve to expand service for the pilot.

Leishman said the city received federal grant money to assist with the first phase of the pilot and staff is now recommending an expansion to try to improve service and expand it to areas of the community that could use it more.

“Currently, it’s limited to the Westview area and by expanding with this COVID-19 safe restart funding, we could expand it to Townsite, Cranberry and possibly even Wildwood, which would give more of the residents of our community the opportunity to try the service and we could get better data for this pilot period,” said Leishman. “BC Transit is very interested in the data because BC Transit is looking at potentially modifying some of the transit services in the province to potentially add on-demand. This could help a lot of communities going forward. I’m in full support of additional funding.”

Councillor Maggie Hathaway asked if the pilot is a big benefit to the community, would BC Transit take over the operation?

“I’m unclear how that is going to work once it’s established,” said Hathaway. “Who operates it or would it become a city-run operation?”

Leishman said once the pilot is over, staff will have to work with BC Transit and council’s direction as to how, potentially, this could become part of the city’s service.

“Once we have the actual technology in place, we could implement it in conjunction with BC Transit,” added Leishman.

Councillor Cindy Elliott said the current bus system for single parents, for example, is impossible to use as a commuter system to go to work and back. She said she is looking forward to seeing if this Zunga Bus pilot can help people to use the transit system for commuting.

“At this point we don’t have a transit system that can help people commute to or from work,” said Elliott. “With the information we can gain from the pilot service as far as its usefulness to the extended communities, we should be able to make a very good case to BC Transit as to shifting some of their current resources over to an on-demand service as opposed to what we are doing now. This is an excellent plan.”

Councillor George Doubt said he would be voting against this item.

“I think we have a study going currently, which was funded from $200,000 of grant funding and $130,000 of city funding, which we went into and I voted in favour of because it was going to be a pilot project to study on-demand transit and to see later on how we could probably work with BC Transit,” said Doubt. “I’m not in favour of adding another $130,000 to it now because I don’t think we’re going to get twice the value of information out of it.

“I’m in favour of continuing with the project and I believe after this pilot has come to an end, sit down and try to get BC Transit involved and do a study of the complete system and see how we can improve the existing system with an on-demand component in it.”

Councillor Rob Southcott said he’d thought about the matter long and hard because the city should not spend that kind of money willy-nilly. He said the money is to come from the COVID-19 restart fund and he views COVID-19 as an opportunity to shift gears.

“I do support this because it checks off one of the major boxes for a community working, and the three that I see are food, housing and transportation,” said Southcott. “This is a move into greater sustainability because it will allow more people to get away without a car. That reduces the carbon footprint.”

Councillor Jim Palm said he approves of the pilot program and it was nice to get $200,000 of federal funding to help run the program, but at the same time, when the city is considering additional funding, the timelines concern him because BC Transit and the current system in place doesn’t change overnight.

“We don’t know how long BC Transit is going to be studying this before they make any moves,” said Palm. “If we okay another $130,000 for our pilot, which is already funded, I just have a hard time wrapping my head around another bus for more data on the same pilot. It may be money that we don’t necessarily have to expend at taxpayers’ expense.

“When it comes to the end of the pilot in December, is the city on the hook to fund two buses? I will not be voting in favour of the additional funds.”

Data could save money, says Leishman

Leishman said expansion of the pilot will give the city the best data and best opportunity to look at possibilities for amalgamating some of the on-demand system into the existing transit system.

“We know we have large, expensive buses riding on some of the fixed-route schedules that are quite empty,” said Leishman. She added that if the city can get as much good data as possible by expanding the pilot, it can potentially save money and make a much more efficient and effective transit system in the future.

At the end of debate, councillors Leishman, Elliott, Southcott and Hathaway voted for the expenditure. Councillors Palm and Doubt, and mayor Formosa, voted against.