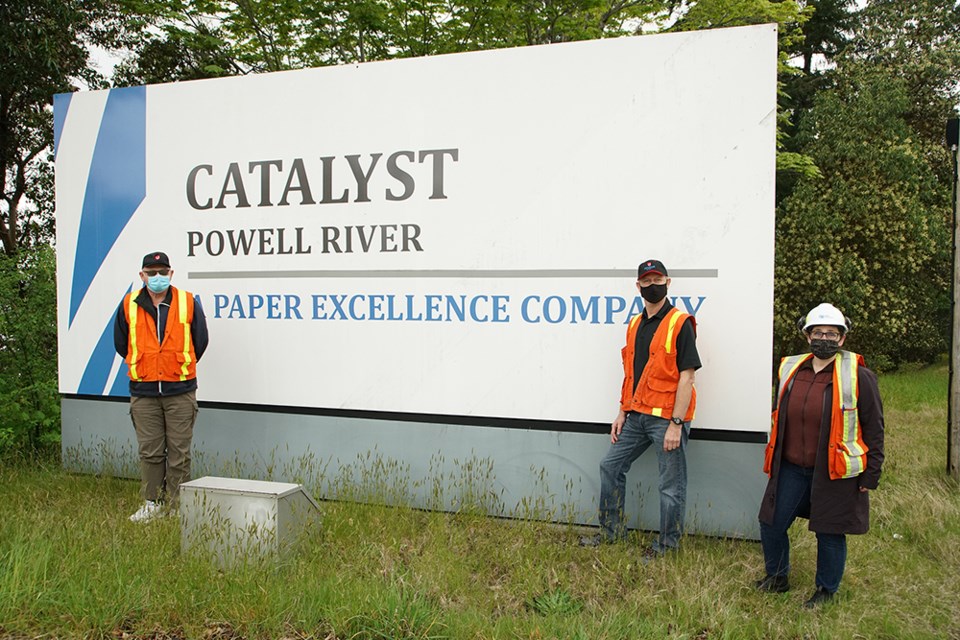 “It was through an incredible amount of hard work with the team here,” said Cuddy. “I can’t say enough about the quality of people we have here at this mill.”

Cuddy said there was a short timeframe to get the mill up and running again after a year’s downtime and there was also a limited budget.

“We had a lot of retirements and a lot of training to do; it was just an unbelievable performance by everybody here,” added Cuddy. “Things are coming together. The first day of efficiency was 85 per cent and on the second day we were at 95 per cent efficiency on the paper machine so it was an excellent performance.”

Cuddy said the mill is putting out a new paper product, but she cannot divulge many details because of the competitive standpoint.

“It’s something new so it was a learning experience for everybody,” said Cuddy. “They have done a fantastic job.”

Cuddy said the start-up shows the innovation of the company, being able to produce something other than newsprint, and having a whole new application for the paper machines.

UNIFOR Local 1 president Eldon Haggarty said the start-up has been absolutely better than he would have imagined.

“The machine has been down for a year and we made saleable paper before schedule,” said Haggarty. “I was on that shift. It was a great night. There were air high-fives from everyone.

“Congratulations to both [union] locals and management, working together,” said Haggarty. “Everyone has stepped it up beyond belief. I’ve got members from number 10 [paper machine] who have never worked on number 11, and the people from number 10 and 11 have worked together to make this day happen.”

Haggarty said number 11 is the mill’s fastest and widest paper machine, and it’s the one that’s running at this time.

He said Cuddy and the mill’s management had worked to bring the papermakers in prior to start-up. He said training is ongoing and the mill staff members are steadily training on the job.

“We have enough trained members to be able to assist those around them and we’ll continue the training going forward to get everybody up to speed,” said Haggarty.

UNIFOR Local 76 president Bill Spence said a lot of his local’s membership are now back at work. He said some will still be in a layoff position for a while.

“Hopefully, when we prove this is a saleable product, as it already has shown to be, then those members will slowly come back to work as we ramp up number 10 down the road,” said Spence. “It’s been a tough year for a lot of people. Even the ones working had a lot of feelings for people who weren’t and that’s the case still today. Hopefully, we’re on the move up and things will get better now.”

Haggarty said about 200 people are now back to work at the mill.

He said it’s good to see that young people make up part of the composition of the mill’s workforce.

“A lot are coming back to town,” said Haggarty. “It adds vibrance to the community. We need the young families.”