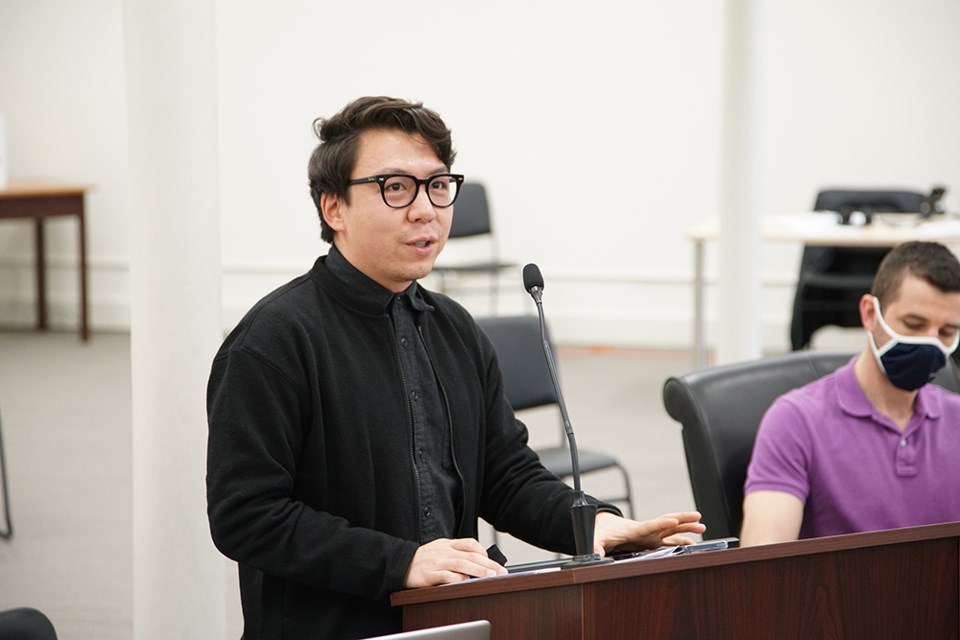 OUTLINES REQUIREMENTS: Regional social planner Kai Okazaki introduced a report on housing needs throughout the qathet region, which had been commissioned after funds for the purpose were distributed by Union of BC Municipalities.Paul Galinski photo

City councillors were given an overview of the qathet regional housing needs report recently, which outlines housing needs for the next five years.

At the March 30 committee of the whole meeting, regional social planner Kai Okazaki said developing a housing needs assessment and strategy is an action item identified in the city’s strategic plan, under the goal of suitable sustainable housing. He said housing is also a strategic priority and action item identified in the Powell River regional social planning program.

“Therefore, I have been working closely with staff from the city, the qathet Regional District and Tla’amin Nation to form a staff working group to really carry the direction of the project forward,” said Okazaki.

Councillors then heard from Patricia Maloney, from Dillon Consulting Limited, a consulting firm involved in research and preparation of the report. She said the study was completed to meet requirements of the provincial government. Funding was received from Union of BC Municipalities, she added.

“The study looked at the full housing continuum from market ownership to the other end of shelters and transient housing,” said Maloney. “Data requirements for a housing needs assessment includes information on population, households, income, employment and housing units.”

Population increase at 1.3 per cent

Maloney said census figures going back to 2001 were examined. She said over 15 years, Powell River’s population had only increased by 1.3 per cent.

She said for the report, engagements such as an online housing survey had been completed, there were multiple one-on-one interviews, three virtual roundtable meetings, a virtual meeting with the Tla’amin Nation housing committee and two virtual public open houses. The survey provided 512 responses and 61 per cent of those were from the city.

“It was quite representative with a broad range of ages and we believe a large number of people responded because of the need for housing,” said Maloney. “We generally talk about rental housing. The reason for that is the difficulty for lower income people getting into home ownership.

“Respondents to the survey indicated the barriers, with housing prices being one. The ability to accumulate a down payment and qualify for a mortgage was very high on the list.”

Maloney said 31.5 per cent of all renters who finished the survey said they had been displaced in the past year. She said this was for a combination of reasons but 90 per cent of the respondents to the survey indicated they did not believe there is enough appropriate or affordable housing in the community.

Maloney said purpose-built rentals were the greatest demand identified in the study, and affordable rentals was key.

“There is a need for safe, secure, year-round, accessible rentals that allow pets and children,” said Maloney.

The findings of this study indicate there is a need for between 319 and 989 housing units in the city to meet the range of the population projects, according to Maloney.

“What we’ve also identified is that there is an oversupply of large house units with three, four or more bedrooms,” said Maloney. “What is required is more predominantly two-bedroom apartments or housing units.”

“Through city staff, we have identified a site on Barnet Street that would be suitable for affordable housing,” said Maloney. “It meets the location criteria, it’s owned by the city, and it could be either leased to not-for-profit organizations for a dollar a year or donated.”

The property in question is land that had been considered for a new fire hall, adjacent to the Powell River RCMP detachment.

Maloney said there are 15 recommendations in the study, ranging from establishing a Powell River housing authority, providing land for affordable housing, and looking at zoning bylaw amendments that could encourage rental housing.

“The important thing is to update the housing needs assessment in 2023 because there will be a new federal census conducted in 2021,” said Maloney.

Mayor Dave Formosa said it was an excellent report and a tool that can be used by everybody. He said it’s unfortunate there has been downloading from senior levels of government, which used to be involved in building housing projects.

Crisis will get worse, says councillor

Councillor George Doubt said with the economy and where it’s going, it’s going to mean there will be a homeless crisis that is worse than it is currently.

“We’re going to have to do more to protect the residents of Powell River from being homeless,” said Doubt. “The availability of land is a key. It was previously when municipalities and the federal government were building affordable housing and cooperative housing. Municipalities and regional districts that could supply land were doing it and that was making it possible to build affordable housing. One thing we do have in the city is land and I think we need to look at what we can appropriately use.”

Councillor Maggie Hathaway said the report gives the city some real statistics to move forward to show developers or BC Housing this is what the region needs.

The report will be taken to council for adoption on May 6.